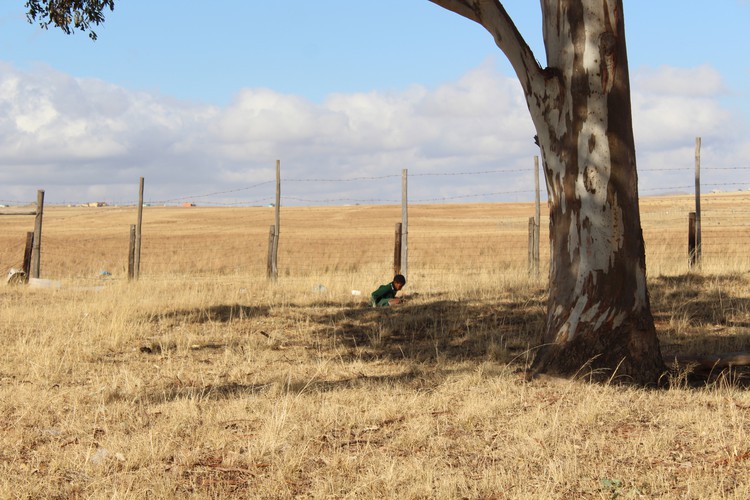 The youngest learners at Mangelengele Primary School near Tsomo have been told to use the fields instead of the school toilets, which teachers say are not safe. Photo: Yamkela Ntshongwana

Teachers at Mangelengele Primary School near Tsomo in the Eastern Cape are telling young learners to use the school field instead of the toilets, which they say are no longer safe.

The school, in Mahlubini, was built around 1960 and the toilets were built in 1991, according to the principal, Nocwaka Nkukhwana.

There are 70 learners from Grade R to Grade Seven, and six staff members.

When GroundUp visited the school, the condition of the toilets was very bad. Seats were broken, the zinc sheets had holes and mostly, the pits were full. Only two of these toilets are still in use, one for the teachers and one for the higher grade learners.

Nkukhwana said learners in grades R, One and Two had been told to use the school field instead of the toilets.

She said she had written to the Eastern Cape Department of Education (EDDoE) several times since being appointed principal in 2014, asking for help. “Our school budget is too small to build new toilets,” she said.

She had even sent photographs of the toilets to the department.

Grade R teacher Ntomboyise Mbutye, who has been working in this school since 2003, said every time learners needed to relieve themselves she had to stop teaching to accompany them to the field. She said this was slowing down her teaching.

But ECDoE spokesperson Malibongwe Mtima said the school was too small for the department to invest in.

Primary schools had to have a minimum of 135 learners and secondary schools 200 learners, failing which the school was a candidate for merger with another school or close-down.

He said when numbers of learners in a school started dwindling, the department would come to advise the school on merging with a nearby school or closing completely.

He said the government could no longer invest in Mangelengele Primary and instead a process of rationalisation and realignment should take place. In the meantime, he said, the school should use its maintenance budget to hire toilets.