But Oak Valley says union has not signed agreement 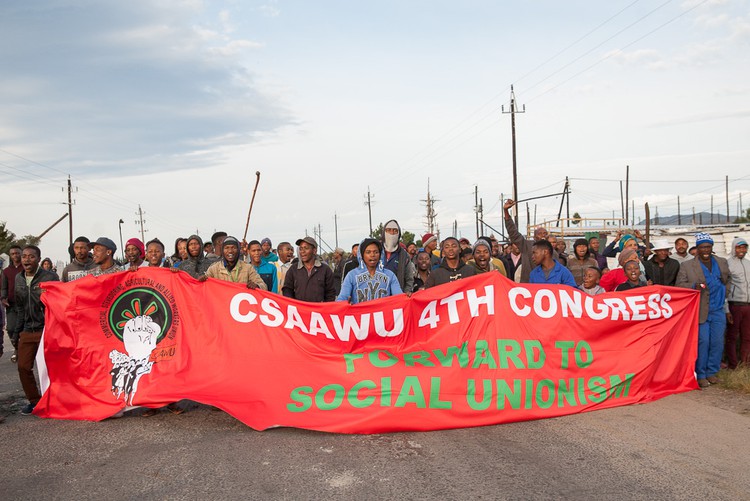 Farm workers have been protesting for higher wages and an end to single-sex hostels in Grabouw. Photo: Ashraf Hendricks

The two-month farm workers strike by Oak Valley employees has been suspended.

Farm workers have agreed to a reduced “6.5% increase, along with R300 housing allowance”. This also includes the promise that hostels would be “transformed”, says a statement by the Commercial Stevedore Agricultural and Allied Workers Union (CSAAWU).

The strike has been ongoing since early May. On several occasions workers blocked the N2 highway making it difficult for residents to leave the area. Striking workers had been demanding a minimum wage of R250 per day, an 8% increase, an end to labour brokering, and the end of single sex hostels.

A case has been initiated at the Equality Court with regard to the hostels which CSAAWU says only houses “African-black male workers” who are not allowed to have their families stay with them.

“While we’ve accepted the lower wage offer, we are insisting that the company delink the housing allowance with any evictions on the farm. We have still to see whether they will actually transform the hostels or merely patch them up,” said Trevor Christians, General Secretary of CSAAWU.

In an email Oak Valley responded: “CSAAWU has not yet agreed to our wage offer in totality which includes an increase of 6.5% and R300 pm housing allowance for all permanent employees. As a result, no CSAAWU members will receive the benefits of this very fair offer until the union signs the agreement. 75% of our workforce (i.e. the overwhelming majority) have signed the wage agreement and are enjoying the benefits.

“No promise has been made to ‘transform’ the hostels. The hostel meets all SIZA industry standards for communal accommodation.

“29 workers (not 35) have been residing in the hostel unlawfully since 22 May 2019 when their picking contracts ended. They have refused to vacate. We continue to provide free accommodation and free meals despite this unlawful occupation. These workers do not currently have pruning contracts and therefore cannot be ‘fired.’ They are the employees of the temporary employment service, not the company.

“We believe we have put a fair offer on the table and trust the union will agree in the best interest of its members.”

Correction: In the light of the reply from Oak Valley we changed the original subtitle of this article, which had read: ‘Oak Valley and workers agree to 6.5% increase and end of single-sex hostels’