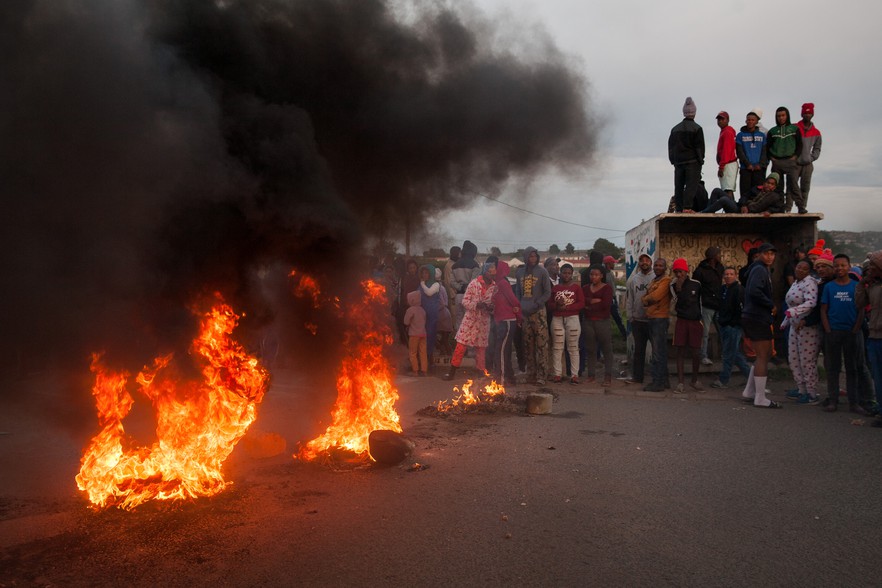 Roads were blocked with burning tyres and debris early in the morning in Grabouw. Some residents who were watching were not sure why the the protest was happening or who organised it.

Since 6 May, about 60 farm workers from Oak Valley Estate in Grabouw have been protesting with the help of some community members. Supported by the Commercial, Stevedoring, Agricultural and Allied Workers Union (CSAAWU), their demands include a wage increase to R250 per day, an end to labour brokering, and the removal of single sex hostels.

During the protests, the N2 highway near Sir Lowry’s Pass has been blocked frequently, preventing many people from going to work. Schools have also been affected. Instead of galvanising support, the protests have now divided the community. 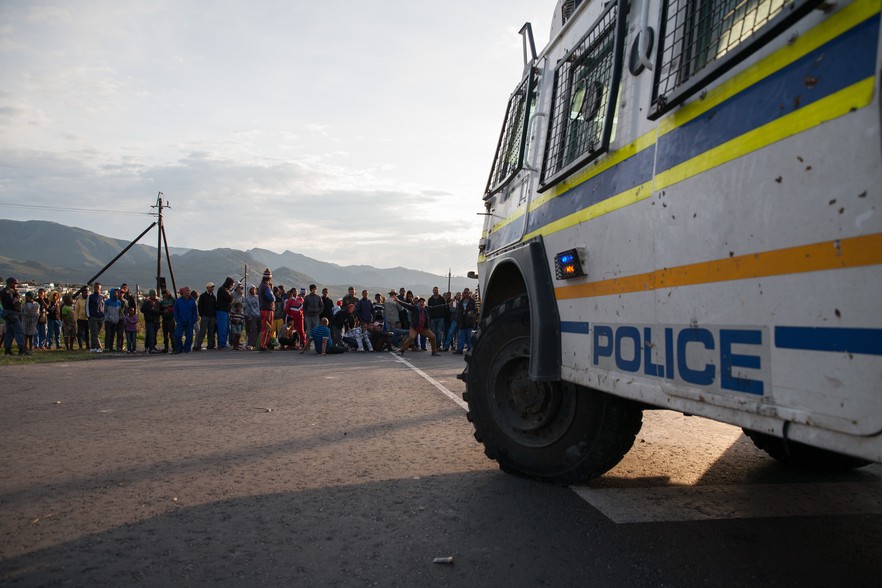 On Tuesday, after protesters were dispersed from the N2 highway, they regrouped and gathered in Ou Kaapse Way (adjacent to the N2) which is the entrance to the township.

“The community is being held hostage,” said David Le Roux, a resident of Grabouw who hasn’t been able to get to work for two days now. When Le Roux left for work at 5am on Tuesday morning his bus was stoned preventing him from leaving. “They are preventing us from going to work,” he said. 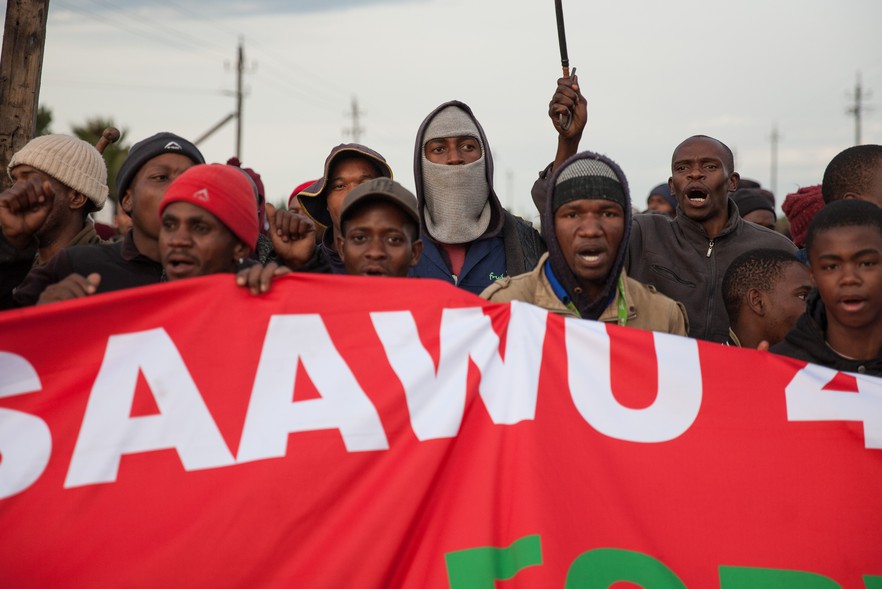 “After 25 years of freedom this is not the way to live”, said Caleb Phula, an area committee member who is supporting the protesters. Phula said that the Coloured community on “the other side of town” is “provoking us”.

Phula denied that protesters are stopping people from going to work. “We’re not fighting them,” he said. As farm workers and their supporters began to march, some residents wanted the streets cleared of burning debris. This caused more tension. 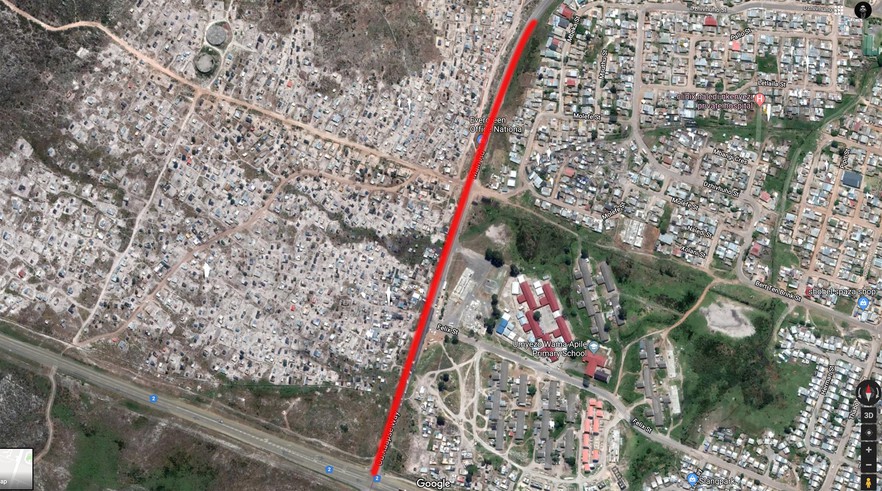 Satellite image of part of Grabouw from Google Maps. 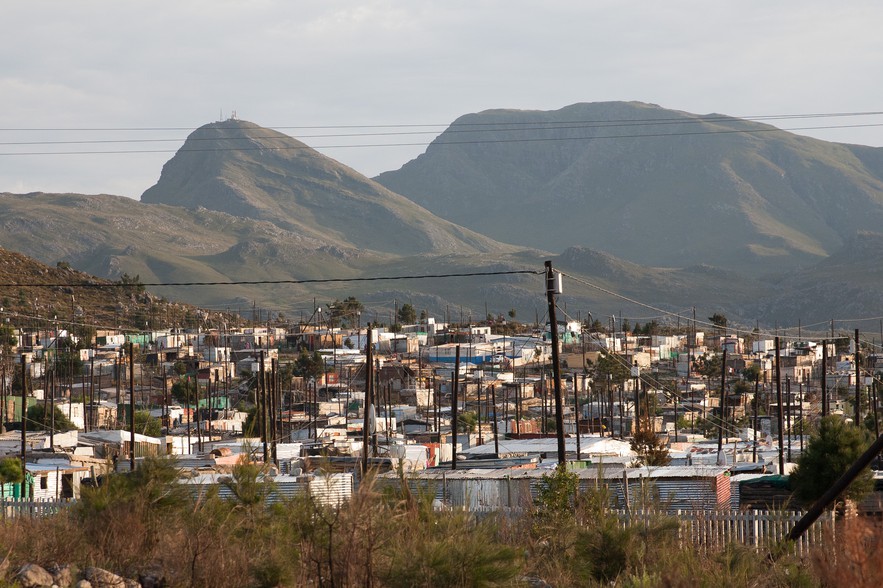 One of the the informal settlements along the west side of Ou Kaapse Way where most residents are Xhosa-speaking. 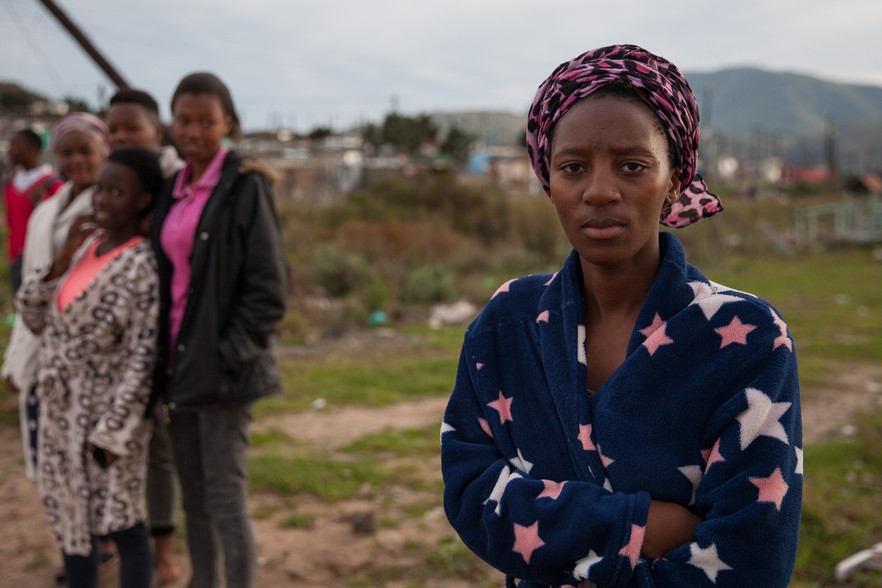 But opinion is not unanimous on either side of the divide. Kgoliso Nqoanyane said that she did not support the protest. Because the road was blocked she could not travel to Parow to write her first-year UNISA exam. “They didn’t understand,” she said. 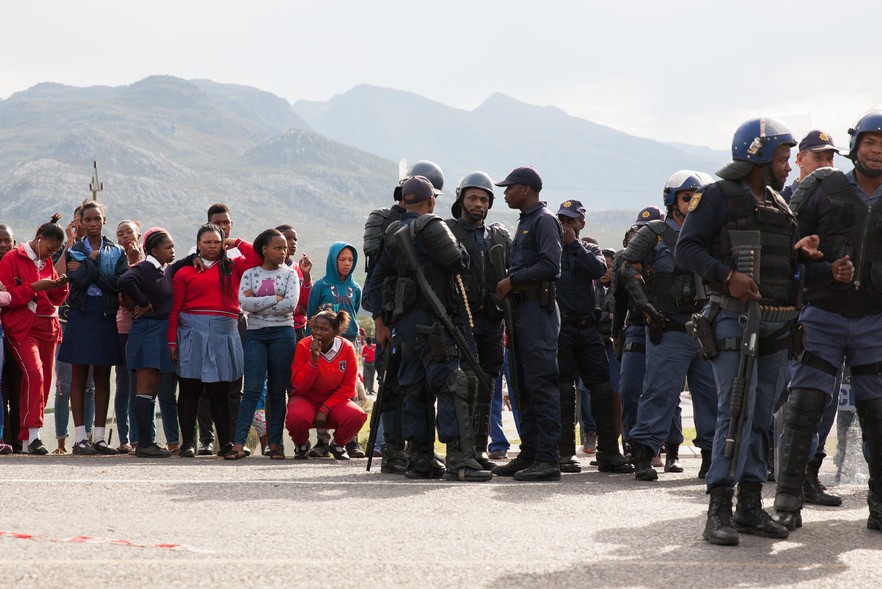 Some schools were closed in the area due to safety concerns. A matric student said that teachers were unable to get to school because of the N2 being closed. He also said that exams had to be postponed “which is putting pressure on us”. He said that because of the protests, he couldn’t focus or study. 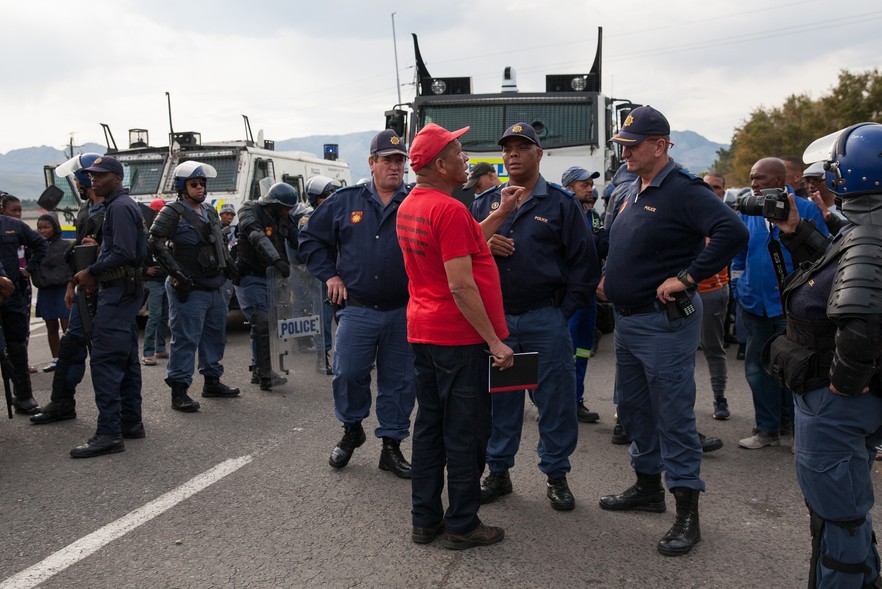 Karel Swart of CSAAWU was arrested on Monday but was released a few hours later. He said that he had been charged with “intimidation” and has to appear in court in June. CSAAWU is organising the striking workers. 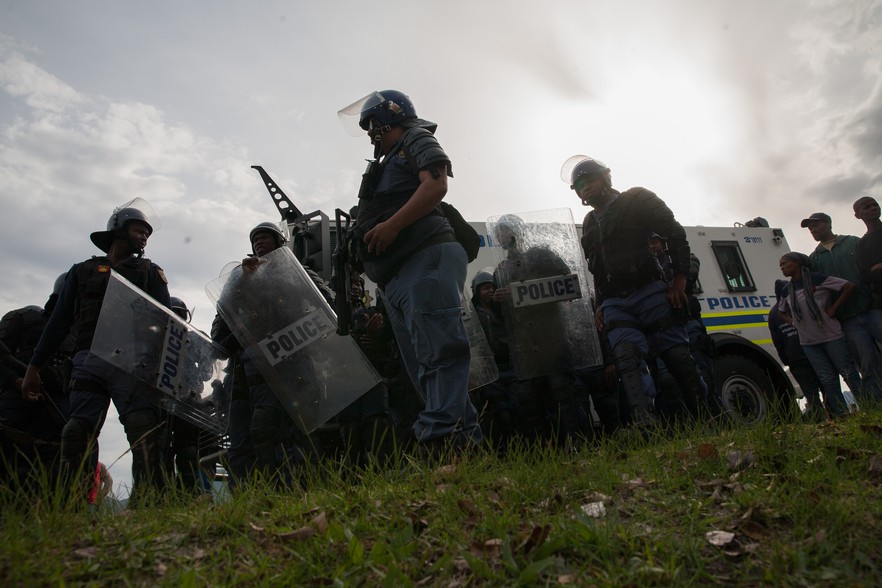 Police officers created a wall between black African protesters and Coloured residents wanting the protest to stop. A police officer explained that they were acting as a “buffer”.

Officers said that they were trying to convince protesters to call off the march to Oak Valley Estate until Wednesday. The police have said they will escort the striking workers to the farm on Wednesday in an organised protest. But the protesters did not agree. 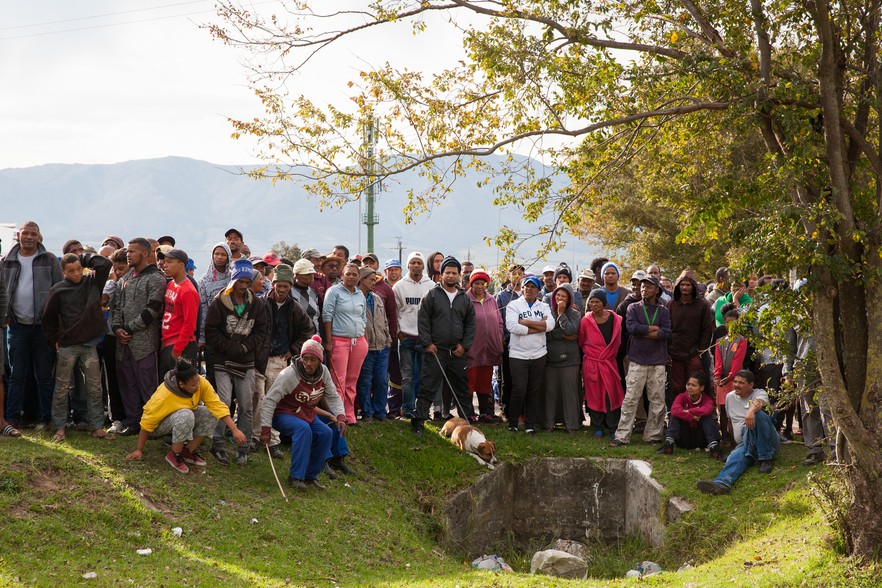 “I don’t have the words to describe when Coloured and poor people fight with each other,” said Swart. This conflict “is playing into the hands of the farmers and the municipality”. Regardless of colour “we are all poor and we belong to the working class”.

Swart said that the wage increases would benefit all farm workers from all communities. He said that the low wage was responsible for the unrest and violence, and that the farm owners were not taking responsibility. “They put the blame on poor people who stay in the informal settlement.” 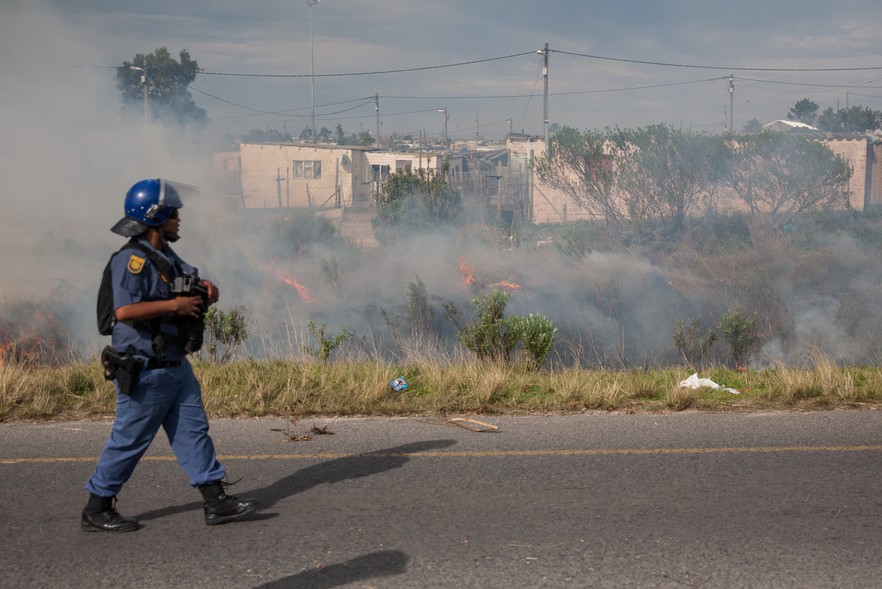 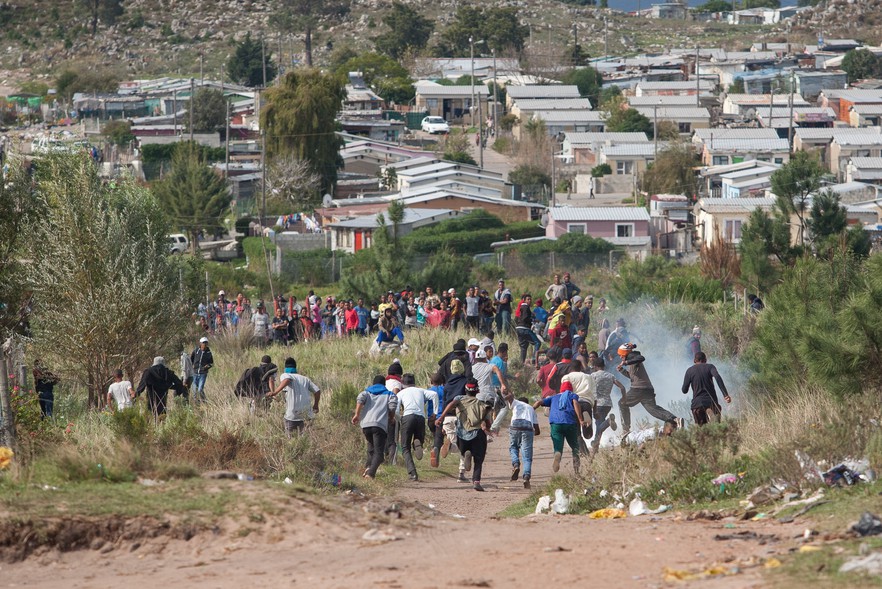 Police used tear gas to disperse the protesters. They also used rubber bullets, but sparingly. After the protest was dispersed, protesters burnt bushes and hurled stones. A large number of people throwing stones were children. GroundUp did not see any arrests. 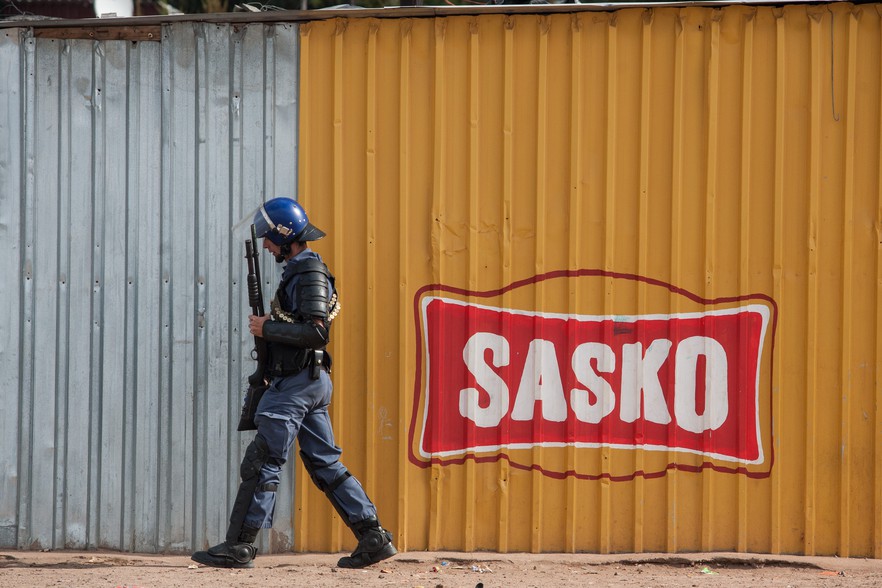 Hugo Geldenhuys of the Theewaterskloof Municipality said that road closures were affecting the entire area. “It also affects businesses as they cannot do their trade,” he said.

He said that protesters close the national highway because it has become “a quick way for people to get their demands met”. He said the workers have been heard and “there’s no need for further action”.