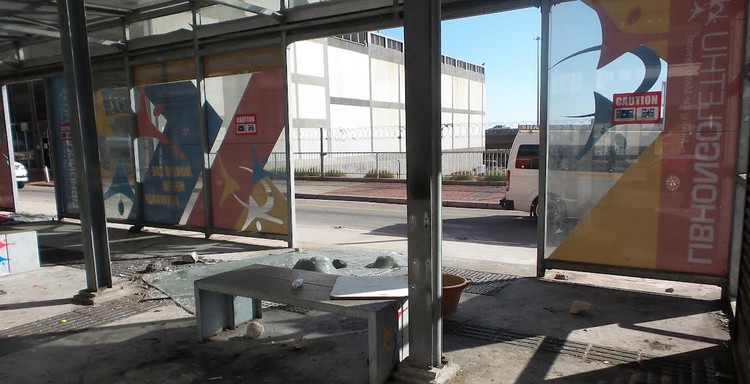 The Nelson Mandela Bay municipality has paid nearly R25 million for the construction of bus shelters, but the contractor has abandoned the site and the shelters are in ruins.

Municipal spokesperson Mthubanzi Mniki said R24.9 million of the more than R57 million contract had been paid to Halifax Group to provide shelters for users of the Libhongelethu Bus Services.

The Libhongolethu Bus Company was formed in 2012 and is owned by the municipality. It was to operate in the townships of Gqeberha, Kariega and Despatch but it is only operating in the northern areas of Gqeberha.

The bus shelter project was to have been completed in June 2019, but the contractor abandoned construction midway. Princess Tobin-Diouf, a Public Relations Officer at the municipality, told GroundUp Halifax had left the project after the municipality fined the company for slow progress.

Tobin-Diouf said 12 shelters meant to accommodate between 30 and 180 people, and 22 smaller shelters had been partly completed. An additional nine kerbside shelters have not yet been built.

Passengers and drivers of Libhongolethu buses complained to GroundUp about the state of the shelters. Violet Boesman, who lives in Cleary Park and uses the bus service to Gqeberha city where she works, said: “I was delighted when I first saw contractors building the shelters. The shelters were abandoned halfway and criminals have taken over. I am even afraid to use the bus service.”

Meanwhile, he said, the municipality safety and security directorate had been ordered to protect the structures.

Efforts by GroundUp to contact the Halifax Group were fruitless as the Gqeberha office referred GroundUp to their head office which in turn referred us back to Gqeberha. There was no response to our email sent to an address provided by a receptionist at head office for a senior executive.