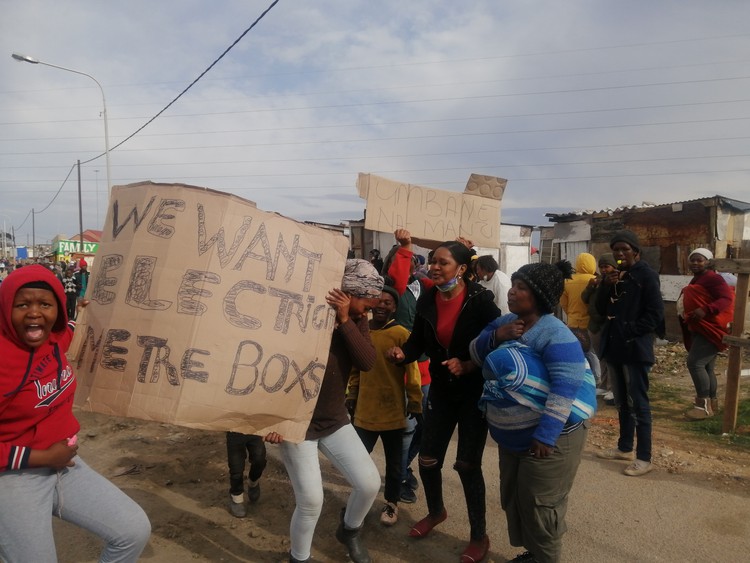 About 150 protesters from Govan Mbeki Village informal settlement in Gqeberha blocked the intersection of the R75 and the M14 on Wednesday, demanding electricity, water and toilets.

They said that they had not been able to connect their izinyoka connections for about a week. They also complained that 700 shacks share only three standpipes and three chemical toilets.

As early as 4am protesters were stoning vehicles on the roads. The Public and Order Police dispersed them with rubber bullets and teargas.

The protesters said the protest followed Monday’s meeting with Masixole Zinto, Mayco Member for Human Settlements, who had promised them the damaged transformer would be fixed on Tuesday and a second one installed to ease the overload.

But Zinto vehemently denied this. “Yes, I met with the residents on Monday. But I never promised them a second transformer because izinyoka [the makeshift connections] are illegal.”

“The transformer is overloaded and keeps on tripping. It was the second transformer to be replaced.”

Zinto said Deputy Mayor Luxolo Namette, who is also the Mayco Member for Electricity, was attending to the problem.

Jazz Nantu, chairperson of the residents’ committee, told GroundUp, “Since Thursday last week we have been without electricity because an electric transformer where we connect on M14 is tripping. Since then, our area became like a rural village where everyone cooks outside on open fires and uses dangerous candles.”

Nantu said the situation was made worse by lack of water and bad sanitation. “We share three standpipes. Out of five chemical toilets, only three are working.”

Residents had dumped the other two toilets because they had not been cleaned for too long and were full of maggots. “We use empty paint buckets to relieve ourselves. We throw those buckets next to our houses and next to the road,” said Nantu.

“Since yesterday [Tuesday] we have been without water. Residents are forced to walk about a kilometre to get water in Cleary Park informal settlement. They also have to cross the dangerous R75 Uitenhage Road carrying water bottles. We want seven more additional standpipes because three are not enough,” Nantu said. 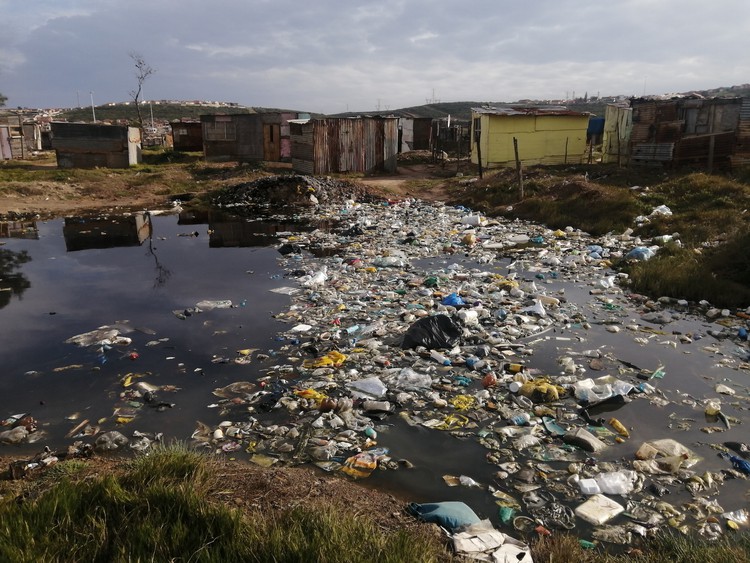 The shack dwellers empty their bucket toilets near their homes. Photo: Mkhuseli Sizani

Gladys Vena, 65, said she used two litres of paraffin for cooking and to boil bath water. “They cost me R45. We want electric meter boxes in our shacks because izinyoka are not safe for us and our children. The live cables are lying on our doorsteps.”

“At night we have no choice but to sleep with a bucket full of poo and pee. We empty it next to the road in the morning. On windy and hot days the whole area stinks.”

Vena said it was too dangerous for her to relieve herself in the bush so she rented a toilet for herself from the owner of an RDP house.

“We queue for water from the standpipes from 5am every day. Sometimes we spend two hours in those queues,” she said.

Nomawethu Tom was busy cooking porridge for her one-year-old son on an open fire. “I cannot afford paraffin because I only survive on the R450 child support grant. Izinyoka are dangerous but they make life easier.”

“For the whole week I have been begging neighbours for pieces of planks in order to cook porridge for my baby.”

Zinto said the municipality was profiling the 140 informal settlements in the city in order to bring in services.

“A contractor was in the area on Friday to determine how many additional chemical toilets and standpipes would be needed. Also to check how many shacks can be relocated.”