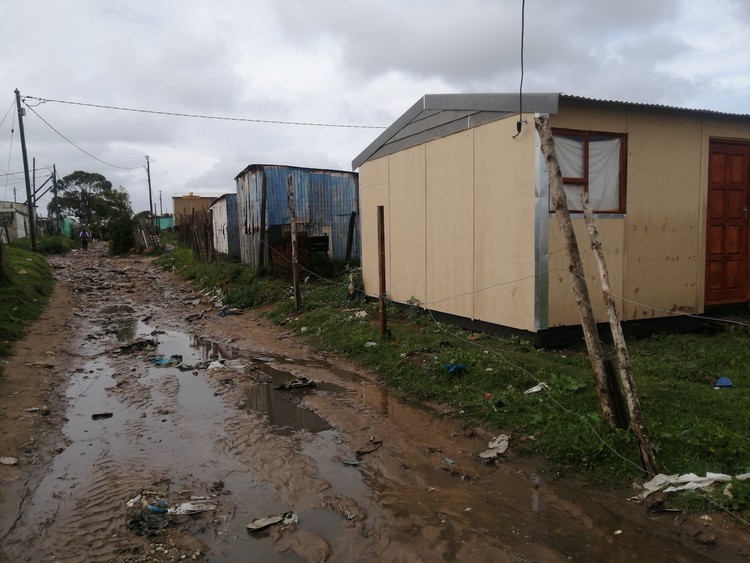 Construction of RDP houses in Walmer Area E in Gqeberha was halted because the municipality said there was dangerous methane gas on the site. But some families were then housed in municipal bungalows on the same site, where they are still living. Photo: Mkhuseli Sizani

More than 160 families are living in municipal housing on a site which the Nelson Mandela Bay Municipality has said is unsuitable for housing because of the presence of methane gas. Municipal officials have refused to explain to GroundUp how the gas was detected and what is being done.

The Nelson Mandela Bay Municipality has frozen an RDP housing project on land in Walmer Area E in Gqeberha. Only 84 of the 163 houses that were meant to be built in 2006 had been completed when the municipality stopped the project because the land was not considered suitable for development owing to the presence of methane gas. But the families who had not been given RDP houses were offered pre-fab bungalows instead, and all are still living on the land.

“The project was blocked due to detection of methane gas,” he said. “Due diligence had to be taken to mitigate the risk of people inhaling the gas. “Currently we are in a process of consolidating our housing program which will translate into a business plan incorporating projects to be implemented from the current financial year going forward. Walmer E forms part of that programme.”

Asked when the gas was detected and by whom, and what is being done to solve the problem, Zinto sent a message telling GroundUp to “Google what methane gas is and what it does to people”. He then called to tell the reporter he was “a lazy journalist”. He refused to answer questions.

Vukile Matwa, former chairperson of the area committee, told GroundUp, “In 2004, 163 houses were approved and construction started in 2006. We were all requested to dismantle our shacks and reduce them into one room in order to make space for RDP houses. I was among the first 84 beneficiaries whose houses were completed. But the municipality said it could not continue with the project because the land contains methane gas.”

“They said this place was an illegal dump.”

When GroundUp contacted Anton Van Greunen, municipal project manager for Human Settlements, he said: “I am in no position to give answers about that project because my predecessor Melekile Hani who was a taxi boss was shot and killed. I took over in 2009 and currently in our department there are no records or people who worked on that project in order to be able to check whether an environmental study was done or not.”

“My answers would make your editors ask more questions. So it is safer for me to say I have no information about the project. Even engineering consulting companies won’t answer your questions.”

Meanwhile 63-year-old Nomdakazana Joni has lost hope of ever getting her RDP house.

“I don’t think I will ever get my RDP house because all the ward councillors just come and go without our housing problems being resolved. In 2006 I dismantled my four-room shack with the hope that I will get my RDP house; instead I got a bungalow. The officials told us the land contains methane gas.

“They kept us in these bungalows with a hope that they will find ways to resolve this problem.”

“In 2008 I decided to rebuild my shack with my old material. I could not stay in a bungalow for too long with my disabled sister and four grandchildren. I am so frustrated. I don’t even know what I am voting for if our leaders can’t help us with our housing problems,” Joni said.

Lungile Baba, organiser of the area committee, said: “My wife died last month crying for our RDP house to be built. ANC leaders are no longer even campaigning in this area for elections because they avoid this problem created by their municipal officials.”