Government has used lockdown to decide who may protest 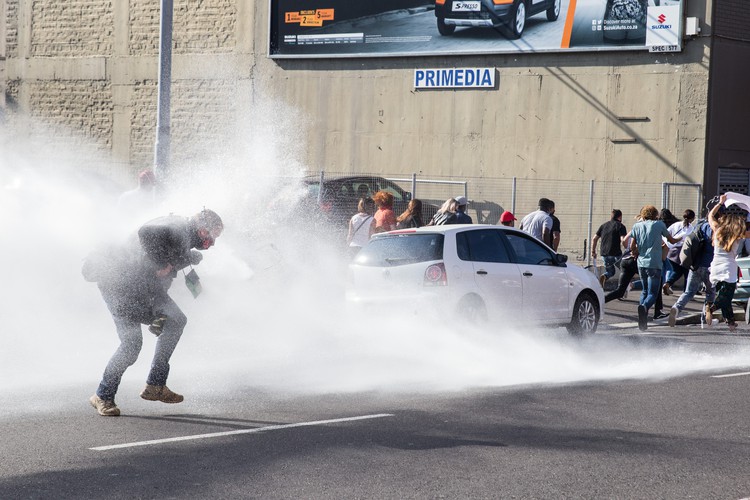 As the country prepares to move to level two lockdown, a number of restrictions are being relaxed. While the regulations governing these changes haven’t yet been gazetted, infographics suggest that the restrictions which will remain in place include those on gatherings of over 50 people.

We can therefore expect that protests in person will remain prohibited. But regulations for such gatherings have not been enforced consistently around the country since lockdown.

The regulations governing the national lockdown up until now have limited the constitutional right to assemble peacefully, but the country has continued to experience protests. South Africa is considered one of the protest capitals of the world and has an estimated 2,000 protests every year.

In general, while gatherings aimed at protesting local regulations or protests taking place in rural areas have faced a strict crackdown by law enforcement, those in more urban areas, such as protests related to gender-based violence and the international #BlackLivesMatter campaign, have not.

Section 37 of the regulations governing lockdown during level three prohibited most gatherings, and placed limits on those circumstances in which they are allowed – such as for funerals, faith-based services and workplaces. The regulations permit a law enforcement officer to order participants in a prohibited gathering to disperse immediately, and to arrest and detain any participants who fail to do so. If a participant then resists arrest, the law enforcement officer may use the minimal force necessary to overcome this resistance, though we know unreasonable and disproportionate force is often used when dealing with crowd management.

In the North West Province recently, 18 retrenched mineworkers took to the streets to get the attention of their mayor. In a consultation with their attorney from the Right2Protest Project, it became clear that the workers had sustained multiple injuries at the hands of the police, who had fired at them with rubber bullets as well as assaulted them, kicking and hitting them with the butts of their guns. One woman involved in the protest fainted as a result of the assault on her, and police officers reportedly laughed while pouring cold water over her in an attempt to revive her.

In Mpumalanga, an 18-year-old was hit on the jaw with the butt of a gun while he was being arrested after a protest in which he was not even involved. He was also injured on his forearm from a rubber bullet while covering his face with his arms. These are just a few examples of the violence protesters and bystanders have faced.

Yet, in Cape Town, activists from the #BlackLivesMatter movement creatively protested by dropping flowers and cards at the gates of Parliament. Meanwhile, in Johannesburg, musicians and artists marched across the Nelson Mandela Bridge to call attention to the continued problem of gender-based violence. While the mayor of Johannesburg raised concerns about physical distancing during the march, overall he commended the artists for taking a stand and organising a protest against gender-based violence.

This inconsistent enforcement means the state has created a situation where it is able to dictate which ‘prohibited’ gatherings must be dispersed and which may be allowed to continue.

This has created a confusing situation for people wishing to protest. Law enforcement officers in different regions seem to have full discretion on which gatherings they choose to clamp down on and which they will allow. It is not clear what informs these decisions or what requirements protesters need to meet. What must those protesting against illegal evictions or who form part of the #Jozi2Stellenbosch campaign do to be treated the same way as musicians and artists who march against gender-based violence?

I know of many people in the past few months who have intended to give notice of a gathering, as is required by the Regulation of Gatherings Act, and have a plan in place for observing physical distancing. What they may not appreciate is that by giving this notice they may be informing the state that they intend to contravene the lockdown regulations by participating in a prohibited gathering.

Some have been creative about gathering to show support for a particular issue in a way that does not necessarily contravene the regulations or affect physical distancing. Motorists in Johannesburg, for example, recently engaged in a motorcade to protest gender-based violence, which the President commended. In Durban, however, motorists experienced resistance from City law enforcement when they intended to engage in a similar action to protest the ban on the sale of cigarettes and other tobacco products.

Whilst the lockdown regulations are a national law, their enforcement seems to depend on who is protesting, why they are protesting and where the protest is taking place.

This is not to say that anyone should feel they can contravene the lockdown regulations as they relate to the right to assemble. Rather, the state should enforce these laws consistently and refrain from prohibiting only certain gatherings around particular issues or sanctioning a particular group of people. Without consistent and fair implementation of these regulations, many are likely to lose faith in the law. With the right to assemble peacefully likely to remain suspended under level two, this continues to be at issue.

Stanley Malematja is an attorney at the Right2Protest Project based at the Centre for Applied Legal Studies, Wits University.