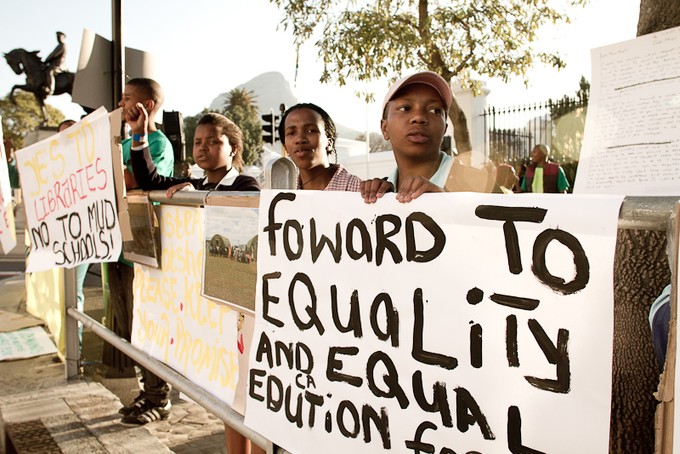 When the state decides that a public school should close down and learners moved to other schools, there is often a public outcry and emotions run high.

For instance, when the Western Cape Education Department decided in 2012 to close 27 schools, it led to a court case that went all the way to the Supreme Court of Appeal.

That court emphasised the need for the state to follow due process and provide communities with reasons for the closure. And yet, there remain worrying trends in the way school closures continue to be implemented.

Thousands of public schools have poor infrastructure. The legacy of colonialism and apartheid means that thousands of learners traverse long distances and dangerous terrain to get to school, and many schools are underfunded and do not have enough teachers. Sometimes state resources are invested in maintaining remote schools attended by very few learners. Because of this, the strategic closure of schools can at times be necessary for the promotion of the best interests of learners and the proper utilisation of educational resources.

However, this process should be handled with great sensitivity so as to allow parents and the community to engage with the process and the reasons for the closure. Such public consultation is fundamental to democracy and responsible governance.

The state must make sure that public participation in the administrative process is respected, not merely to respect the rule of law, but to comply with a democratic duty to the people.

The legal requirements for school closures

The South African Schools Act (SASA) provides for public participation. The provincial education MEC has the power to decide to close a school, but section 33 of SASA says that such a decision can only be made if the MEC has informed the school governing body, with reasons, of the intention to close the school, and has published a notice in the Provincial Gazette; if the governing body has been given a reasonable opportunity to make representations about the decision; if the MEC has conducted a public hearing, allowing the community to discuss and debate the proposed closure; and if the MEC has considered the representations of the school governing body and the community.

Equal Education Law Centre has recently engaged the education departments of Limpopo, the Western Cape and the Northwest Province about non-compliance with SASA in the proposed closures of Seritarita Secondary, Lynedoch Primary, Educar Primary and Pica-Pau Secondary School.

In some cases, the schools set for closure are located in ‘forgotten communities’ who suffer poor service delivery with little access to
essential health and social services.

On a larger scale, recent news reports state that the Eastern Cape Education Department made known its intention to ‘rationalise’ 2,000 schools. Currently, there is little public information about the affected schools and the procedural steps to be taken.

While rationalisation may be necessary in provinces such as the Eastern Cape, the provincial department has failed to give any concrete indication about which schools will be closed and when. The process of rationalisation, like any school closure, must also include notice and consultation with communities (including parents, NGOs, traditional leaders, farmer unions, teacher unions and school governance structures).

The SASA process is a necessity

The failure to follow due process can also have unintended consequences. Protests by aggrieved communities may lead to the disruption of the school and the denial of access to education for many learners. The rapid closure of schools also denies parents and community members time to make alternative arrangements. Other logistics, such as moving furniture or learner transport may also not be in place. Uncertainty amongst learners, teachers and communities can compromise learners’ rights to access education.

Provincial education departments must make sure that when they decide to close schools they follow the law, that learners suffer minimal disruption to their educational programme, and communities understand that they can engage with the reasons for closure.

A satisfactory balance must be struck between community engagement and the need for decisive action. The Constitution requires that this balance take into account the best interest of the learners. Communities must be heard and properly considered, but should also be aware that public participation process cannot be never-ending.

Provincial education departments would be wise to remember that schools are not merely buildings of learning for those who attend them, but centres of pride for the communities who plough resources into them and have a vested interest in their continuation.

The author is an attorney with the Equal Education Law Centre.