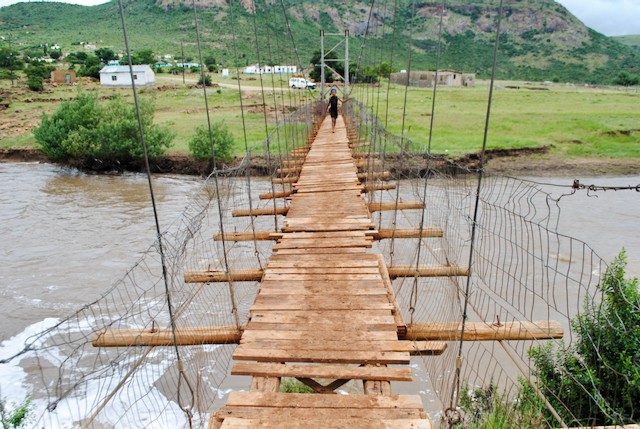 Villagers in Mount Frere use the “Tebetebe bridge” to get to Mount Ayliff and Kokstad. Photos: Mkhuseli Sizani

The Umzimvubu River has claimed the lives of 22 villagers according to the records of a PR councillor for Welakabini in Mount Frere in the Eastern Cape. There are at least another 15 graves dating further back. The river has also reclaimed the bodies of some of its victims from their graves, when graves dug near the river washed away.

Villagers say the problem is a lack of tap water and proper bridges. People go to the river to fetch water, collect wood and do laundry. The villagers must also cross the river to access clinics, the hospital, social grant pay points and attend churches, schools and visit the municipal offices.

Many Welakabini and Ndarala villagers have to cross the river daily to reach the gravel road to find transport for Mount Ayliff and Kokstad. The ward consists of 18 villages. Most people survive on social grants and subsistence farming.

Villagers used to use a “cage” made of planks or a cut open drum hauled by cable or ropes to pull one another across the river. Many people drowned in this contraption.

Now Welakabini villagers use a makeshift hanging bridge made from materials donated by missionaries. It is nicknamed the “Tebetebe bridge”.

Ndarala villagers use a flat cement bridge built by the Eastern Cape Department of Roads and Transport in 2002.

PR councillor Noziphiwo Mantshongo (DA) said, “I am 38 years old. Our grandparents complained about the same problem of bridges under the apartheid government. And still in this democratic government there is no change … In 2018, when pregnant Thembisa Malata drowned, the officials came and made another empty promise.” 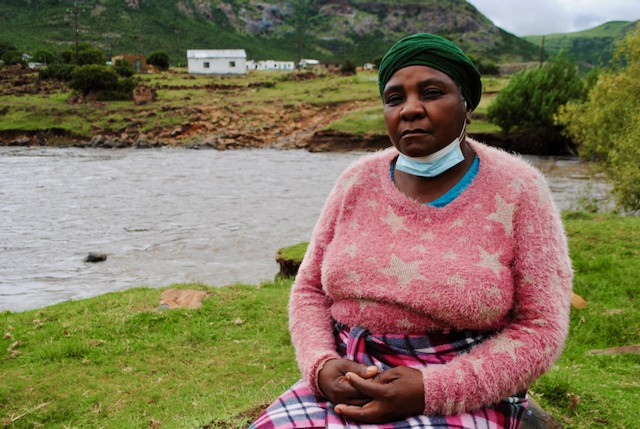 Felicia Malata’s pregnant daughter, Thembisa, drowned in the Umzimvubu River in 2018. Felicia will not fetch water from the river. “Maybe I would have healed by now if the municipality had installed taps in our homes, and not be drinking the same water that kills us and our children,” she says.

Felicia Malata, mother of Thembisa, said, “My daughter was nine months pregnant when she drowned in this river. She went to the clinic and used Tebetebe to cross. I think on her way back home she was tired and decided to cross the river nearer her home.”

Malata now pays people R200 from her old age grant to fetch her water. “Maybe I would have healed by now if the municipality had installed taps in our homes, and not be drinking the same water that kills us and our children,” she said.

Pretoria Ntsevu, 83, was returning from Kokstad where she went to collect her social grant. Unable to negotiate the bridge with her shopping bags, she asked people to help her across. She said she will only put a foot on the bridge if she is the only person on it.

“I have been living this miserable life since I became a bride here in 1958. We had to cross the river with the wood we collected on our heads. Many people drowned during heavy rains and children couldn’t attend the school.

“I am deeply hurt with our living conditions, but we always vote ‘for a better life’. I love the ANC, but I am disappointed to find myself still fetching water in the river.”

“I ask young girls to draw water for me and put my ten-litre bucket on my head, because I am scared the river banks might collapse and I will be swept away,” she said. 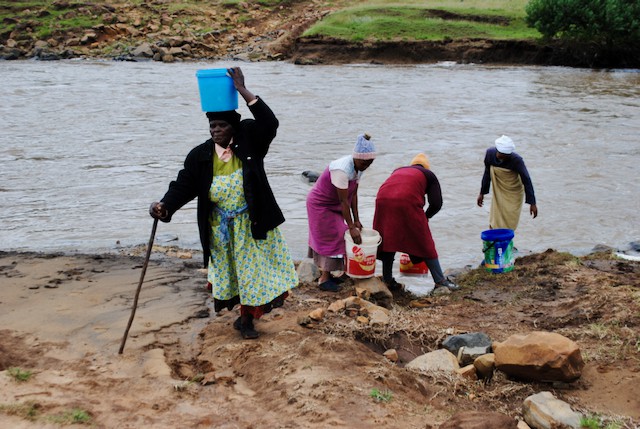 “After school I do the same thing. Other parents are also helping their children,” she said. 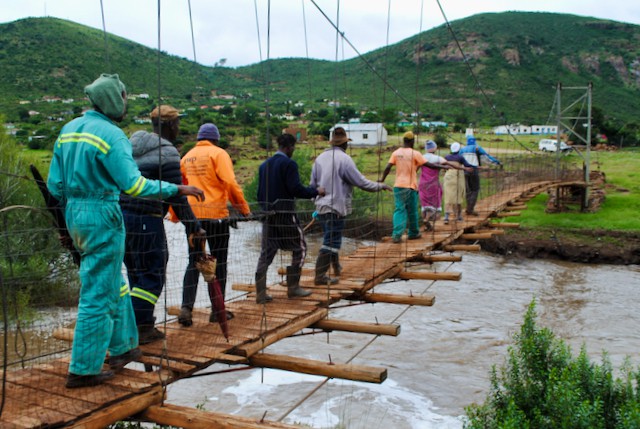 Villagers cross the Umzimvubu River on the “Tebetebe bridge”.

Mxolisi Bucu, a Welakabini headman, said, “We built Tebetebe ourselves in 2004 after a guy from an Anglican Church from overseas donated the material to build it. He guided us on how to do it. We have been trying to fix it because some of the planks are broken and it is over used.

“We carry the dead and sick people with an old bed and cross on this Tebetebe. For many years we have been asking the municipality for a proper bridge but all our cries fall on deaf ears.”

As for the Ndarala bridge, Ndarala Village headman Nosca Nqabeni said, “It has no guard rails and most of the time is used by learners. It is only usable when the river is not full. But during heavy rains all the seven schools get affected … Residents are forced to walk long distances to access that risky Tebetebe.”

“For three weeks since January this river has been overflowing. No vehicle or person could pass on this bridge. Learners and workers had to stay home until the water level dropped last week.

“We have a high rate of dropouts because sometimes it takes a month for water to sink. Schools are continuing with the syllabus in the absence of the affected learners,” she said.

“For many years they have been complaining about this bridge which is not safe. We took those complaints and sent them to the chiefs, ward councillors and municipal officials.

“In our Integrated Development Plan meetings, election campaigns and during the drowning incidents they always promise to build us the bridge.

“In January we had two funerals in this village; men had to carry coffins all the way, across that Tebetebe bridge to the village. They walked about eight kilometres with those coffins because the roads are also impassable,” Nqabeni said.

Mantshongo posted a video of the coffins being carried on social media. It created an outcry, but prompted no concrete action from government.

Spokesperson for the Eastern Cape Department of Roads and Transport Unathi Binqose said there is a national plan to build a proper bridge. Binqose said the low bridge had been built by the provincial department because the municipality, whose responsibility it was, had financial problems.

“We have realised the need to build a proper pedestrian bridge which will make lives much better for that community.”

Umzimvubu Local Municipality spokesperson Nokhanyo Zembe said there is no plan to rebuild the road and bridge at present.

Asked about bringing water to the villagers so that they would not need to draw from the river, Alfred Nzo District Municipality manager Zamile Skhundla said, “The municipality does not have a water project in that area.”