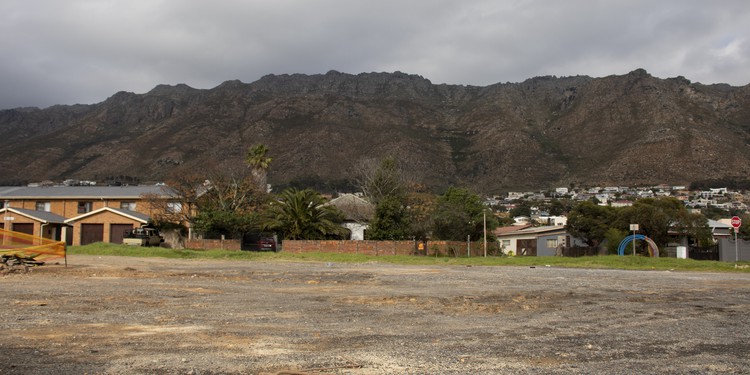 The Gordon’s Bay Islamic Society purchased a piece of land on the corner of Roos Street and Lancaster Road in 2014 to build the town’s first mosque. Photo: Aisha Abdool Karim

After a five-year wait and over a hundred objections from residents, the Gordon’s Bay Islamic Society has been given the green light to begin construction on what will be the seaside town’s first mosque.

“We are elated,” said Cassim Peer, Islamic Society Chairperson. “We are very pleased that justice had prevailed here.”

In 2014, the 2,700m² piece of land on the corner of Roos Street and Lancaster Road was purchased by the Gordon’s Bay Islamic Society with the intention of building a mosque for about 100 Muslim families residing in the town.

In the meantime, Muslim residents had two options. They could drive to one of the seven mosques in Strand, the neighbouring seaside suburb, but many Muslim residents live on the outskirts of town in farm residences. Or they could utilise a converted warehouse behind a local supermarket on Mariner’s Way. This space was not intended for use on a regular basis. The warehouse entrance is behind a garbage collection area in an alleyway that frequently floods when it rains.

“We used to pray there [in the warehouse], then we decided that we need a proper premises because the community was growing,” said Peer.

When the land was purchased in 2014, the Islamic Society was hopeful that this meant soon Muslim residents would have an adequate prayer space in Gordon’s Bay. Located between rows of houses and around the corner from the Gordon’s Bay Spar and Woolworths, the land was zoned for commercial and residential use. Before proceeding, the land needed to be rezoned for a place of worship. This is when the objections were raised.

The Gordon’s Bay Islamic Society submitted the application for rezoning on 1 June 2017. During the public participation process, which took place from 14 June until 17 July 2017, 134 objections and one letter of support were received from residents. The Islamic Society then responded to objections on 23 August 2017 and a hearing with the Municipal Planning Tribunal was set for 19 April 2019.

“The Municipal Planning Tribunal considered all of the objections very carefully,” tribunal chairperson David Daniels told Daily Maverick in July. “Many of the objections received related to concerns regarding noise levels. We can confirm that the applicant specifically undertook measures to ensure that the mosque will not be a noise nuisance.”

The Planning Tribunal approved the mosque with conditions agreed to by the Islamic society. These are that the mosque will not amplify the call to prayer so it will not be heard by those living around the mosque. Also, the Islamic Society will expand the parking area to include 40 bays plus disabled parking bays.

Peer believes that the bulk of the objections raised were “disingenuous” and “unsubstantiated”.

“They are just taking whatever they can find and throwing it into the pot, hoping something will catch. We see that. We see through it.”

“Even at the Tribunal, they were quite nasty and were using words that were not appropriate,” said Peer.

Following the Tribunal, the matter was then taken on appeal to the City’s Planning Appeals Advisory Panel on 10 September. A formal notification was then sent out on Thursday, 9 October, advising that the appeal was dismissed.

“This means the application has been approved and that the development can continue. Those who disagree with the Mayor’s decision may approach the Western Cape High Court with a review application,” said Nieuwoudt.

Peer said many of the initial objectors had sent emails after the appeal was dismissed to congratulate the Islamic Society on the outcome.

“Congratulations to the Islamic Society of Gordon’s Bay the final approval for the mosque has been granted - it has been a long road, but finally you have all the permission and we look forward to seeing the new design,” wrote the Gordon’s Bay Residents Association, one of the initial objectors, in a Facebook post on 11 October.

Although there had initially been 134 objections, the Panel only received one valid appeal. This was submitted by Leonor Bosman, convenor of the objections against the land rezoning.

“I am not the only one [objector]. There are hundreds of objectors in Gordon’s Bay,” said Bosman. “I have a list of 100 objectors that have pledged money for further actions … So there are still 100 objectors feeling very strongly about the case.”

The key points highlighted by Bosman were the lack of a visual impact study, an environmental impact study, and what the objectors believe is an “inappropriate” location choice. The objectors feel there has not been adequate assessment of how the mosque, in particular the planned minarets, will fit in with the aesthetics of the town, what it may do to surrounding property values, and its impact on tourism and businesses in the area.

However, Peer said as part of the application made to the City, various impact studies were done by independent assessors who did not find any potential problems that could arise from the presence of a mosque in the area.

“The only thing they can do now is go to court and we are quite comfortable with that,” said Peer. “I am a lawyer; I will defend the case myself.”

Bosman wanted to be clear that this was not an issue of religious intolerance and the same concerns would be expressed whether it was a church or mosque or any other religious building.

“The placement of that building is wrong. A place of worship in the middle of a business hub is not rational,” said Bosman. “The appeal has been rejected and we are considering further steps. I don’t think it’s totally the end of the story.”