“As they were following him, a gunshot went off” 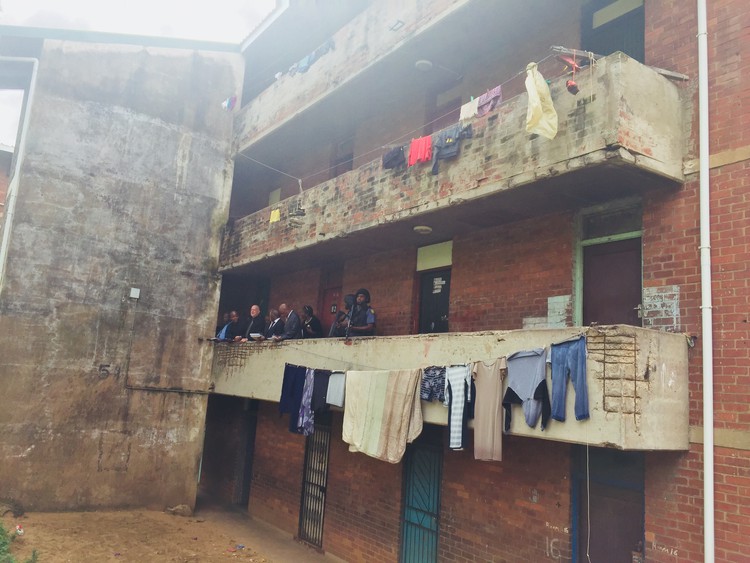 The trial against the Glebelands Eight continued with testimony from the state’s fifth witness in the Pietermaritzburg High Court on Monday and Tuesday. In March this year, the court conducted an in loco inspection at the hostel in Umlazi. Archive photo: Nompendulo Ngubane

The fifth state witness testifying against “The Glebelands Eight” has implicated some of the accused in at least three murders that took place at the hostel in Umlazi, Durban in 2015 and 2016.

The witness, who testified in camera at the Pietermaritzburg High Court, said that on 14 July 2015 when his cousin Nkosinathi Ndovela was shot and killed, he saw four of the eight accused at the scene — namely Khayelihle Mbuthuma, Vukani Mcobothi, Bongani Mbhele and Mbuyiselwa Mkhize.

“As they were following him, a gunshot went off. After that Mbuthuma and [another alleged hitman only known as Mbanjwa] came running carrying guns in their hands. Mbuthuma came to [where the witness and other friends were playing card games] in the kitchen and said my cousin had been shot by the side of the road. All of us then went to the crime scene,” the witness said.

The other accused in the case are Bhekukwazi Mdweshu, Eugene Hlophe, Ncomekile Ntshangase and Mondli Mthethwa. They faces 22 charges, including nine for murder and attempted murders that occured in and around the Glebelands hostel between 2014 and 2016.

During his two days on the stand this week, the witness told the state advocate Dorain Paver that by the time he had arrived at the crime scene, his cousin was already dead.

“I saw my cousin lying on the ground bleeding from the head. I identified him to the police as my cousin. I did not explain I had seen him being followed. I was scared that I was going to be accused of being a police snitch and my life would be at risk,” said the witness.

In addition to his cousin’s murder, the witness said he also saw Lucky Dlamini and Mzwandile Gawuza on the day of their murders. Both Dlamini and Gawuza were shot dead in Glebelands hostel on 26 March 2016.

“I heard gunshots and looked down. I saw Mkhize, Mthethwa, [and two other men on the bottom floor]. I saw Mkhize and Mthethwa shooting in the direction of Dlamini,” said the witness.

The witness said the morning after Dlamini and Gawuza’s shootings, he packed up his belongings and relocated to Umlazi township, fearing for his own life.

Legal Aid attorney Xolani Sindane for Mbuthuma, Mcobothi, Mkhize and Mthethwa denied that his clients had any involvement in the killings.

The trial continues this week with over 25 other witnesses still expected to take a stand.