Glebelands: blood on an oil bottle shows accused was at murder scene 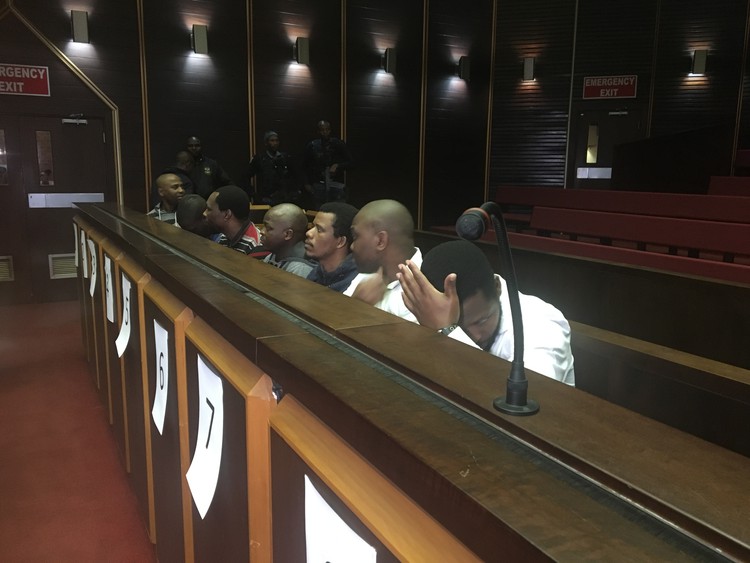 The first accused in the “Glebelands Eight” case, Bhekukwazi Mdweshu, formally admitted in the Pietermaritzburg High Court on Tuesday that the blood lifted from an plastic oil bottle at a murder scene belongs to him.

The blood sample relates to the shooting attack at Block R at Glebelands hostel on 19 August 2014. Mdweshu was injured during that attack.

State witnesses have implicated Mdweshu in the attack.

He is one of eight men, including Khayelihle Mbuthuma, Vukani Mcombothi, Eugene Hlophe, Mbuyiselwa Mkhize, Ncomekile Ntshangase (Mdweshu’s brother), Mondli Mthethwa and Bongani Mbhele who are facing 22 charges, including murder and attempted murder.

The blood sample was taken by Mthokozisi Sishi who works at the Local Criminal Record Centre in Durban. Sishi told the court that he collected evidence on 20 August 2014, the day after the shooting at Block R.

The evidence included the blood sample taken from an empty plastic oil bottle at the murder scene.

A state witness who cannot be named said Mdweshu and other accused had informed him about a plan to attack Block R.

The witness said after the attack, Mdweshu, Mbuthuma, Mcombothi, Hlophe, Mkhize and Ntshangase had come to him. They had asked him to take Mdweshu to the hospital because he was injured. He had refused.

Mdweshu, speaking from the dock, and his lawyer Martin Krog acknowledged that the blood sample was his.

The witness was asked to continue with his testimony about the murder of Mzwandile Gawuza and Lucky Mtwa on 26 March 2016.

He said he watched the shooting from the second floor near his room in block 51. He said he had seen Mtwa fall to the ground from the stairs in block 51. “I looked clearly to the shooters. It was Mkhize and Mthethwa,” said the witness.

State Advocate Dorain Paver asked the witness to clarify who was shooting.

“They were all shooting because all of them were carrying guns,” he said.

The witness said he could see the shooting from the second floor. The shooters were on the ground floor.

He said Mkhize and Mthethwa ran away and he did not see where they went.

He went to the ground floor to see Mtwa who had been shot.

“The police were already there downstairs. While we were standing there we heard another person crying just around the corner of the stairs. We went to check. It was Gawuza. He was shot in his chest. We asked the police to help him. He was taken to an ambulance to the hospital. Lucky died on the scene,” said the witness.

The witness said the faces of the shooters were not concealed.

Paver asked the witness about the attempted murder of three other men, Sthandiwe Sincuba, Mthobisi Mbuthuma and Lucky Dlomo on 27 March 2016.

The witness himself was shot during this attack, along with Sincuba and Mthobisi. The three were shot by Mthethwa.

“Mthethwa shot at Sincuba who stood between us to stop him from shooting at me. He then shot at my arm,” said the witness. “Sincuba was shot in his chest.”

The witness continues with his testimony on Wednesday.

CORRECTION: An earlier version of the article incorrectly stated that Mdweshu took the stand to confirm that the blood sample was his. In fact he answered from the dock.