“Give us opportunities not handouts” say people with disabilities 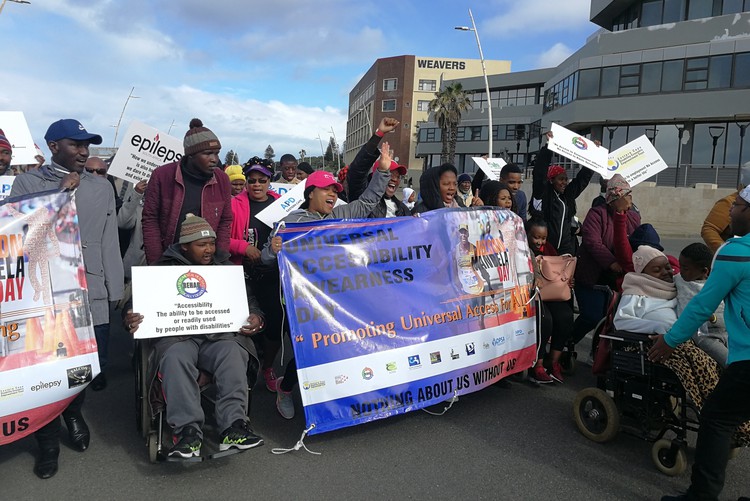 “Give us opportunities not handouts” was the key message from people living with disabilities during an awareness campaign held in East London on Saturday.

The event, attended by about 100 people, started with a 2km walk from the Orient Theatre in Quigney. It was organised by the Eastern Cape Disability Economics Empowerment Trust and was supported by many organisations.

The campaign raised awareness about difficulties people living with disabilities face in a rural province like the Eastern Cape. These include access to employment and business opportunities, lack of wheelchair friendly public transport, and discrimination at workplaces, schools and other public facilities.

Eric Poni of Disability Forum in Buffalo City Metro said people living with disabilities need to be given fair opportunities to work or start their own businesses.

“We have skills and can be further skilled in order to work and earn a decent living. Many people living with disabilities are young and cannot just do nothing and only draw social grants. We appreciate the grants, but they are insufficient because we also have families to support. Disabled people can run businesses like everybody else. They need to be empowered, assisted and funded like every other entrepreneur,” said Poni.

Thabiso Phetuka, CEO of the Eastern Cape Disability Economics Empowerment Trust, said people with disabilities need an environment to do all that they are capable of doing with minimal assistance. He particularly criticised the public transport systems in the province.

Phetuka pointed out that it is two decades since inclusive education became law but that schools catering to learners with special needs were concentrated in East London and Port Elizabeth, and hardly available elsewhere.

Member of the Eastern Cape Provincial Legislature Phumelelo Saziwa said it was important for the provincial government to be present and hear directly from disability sector. “We need health care facilities to ensure that pregnant women are able to go for checkups and if it is discovered before a child is born that it is going to be born with a disability, proper preparations can be done,” he said. “We also need to monitor that departments are employing people with disabilities as per legislative framework which says 7% must be people with disabilities.”