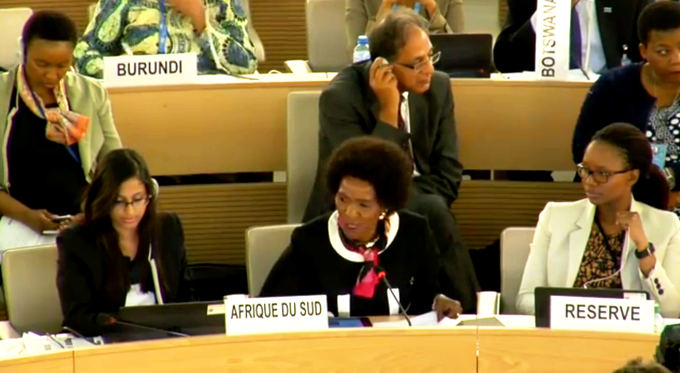 Ambassador Nozipho Mxakato-Diseko explains South Africa’s abstention to the UN Human Rights Council before the vote on a gay rights watchdog resolution in July. Photo courtesy of the UN

Members of gay rights organisations around the country sent an open letter to the Department of International Relations and Cooperation (DIRCO) on Wednesday asking officials to reject a resolution that, if supported, would be a weakening pro-gay rights stance by South Africa in the United Nations.

The resolution, accompanied by a statement of support from the African Group of which South Africa is a member, calls for the suspension of the appointment of an Independent Expert on Sexual Orientation and Gender Identity (SOGI) as proposed by the UN Human Rights Council.

The statement from the African Group says that sexual orientation and gender identity “are not and should not be linked to existing international human rights instruments”.

The open letter, written by groups including the Triangle Project, Gender Dynamix, and Sonke Gender Justice, calls on the South African government, specifically DIRCO, to condemn and dissociate itself from the position of the African Group and to vote against the proposed resolution.

The letter says if this is not done, South Africa will be acting in opposition to previous gay rights legislation enacted over the past few years and would “indicate that South Africa is steadily moving away from progressive humans rights norms”.

The writers note that “the international community have voiced strong condemnation of South Africa’s position”.

Sanja Bornman, chairperson of the Hate Crimes Working Group and a member of Lawyers for Human Rights, said the role of an Independent Expert on Sexual Orientation and Gender Identity is a vital one.

“The appointment of the Independent Expert is a tremendous step in recognising the addressing violence and discrimination against LGBT people, worldwide,” she said in an email.

DIRCO could not be reached for comment despite numerous attempts to reach the department.