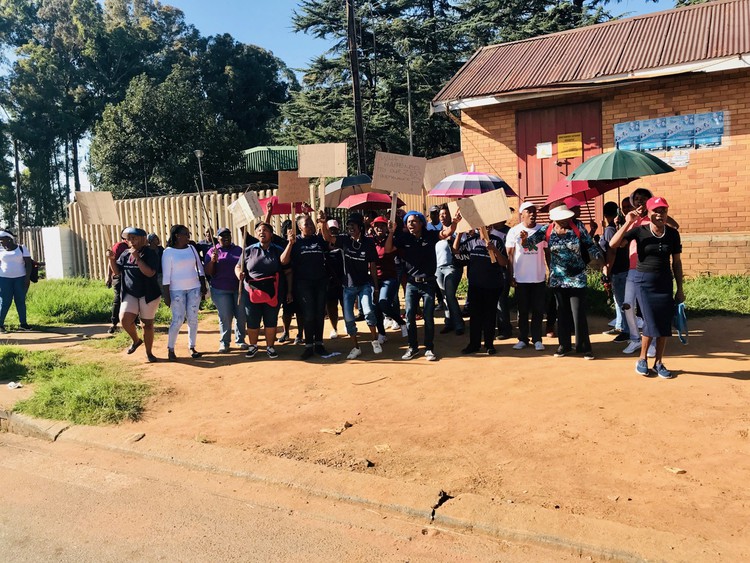 On Thursday, the contract centre at Noluthemba Ngwenya Clinic in Dunnotter, which serves health care workers from Duduza, Tsakane and Kwathem, was shutdown. “We are guarding against any rats who might want to sneak in and sign the contract. We should stand together as care workers,” said Busi Mtshali from Duduza. Photo: Kimberly Mutandiro

On Friday, Zama Mthunzi from the Gauteng Community Health Care Forum said, “We are are targeting all contract signing centres in Gauteng. We do not want to continue signing contracts. We want the Minister of Health to keep his promise and make us permanent employees.”

After shutting down the Community Health Care centre in Hilbrow, workers headed to the Department of Health in Johannesburg and demanded to see Minister of Health Aaron Motsoaledi.

“We were surprised when our superiors announced that we were to sign a 12-month contract and continue earning the R3,500 stipend. How does that happen when Motsoaledi announced last year in November that we are now going to be earning R6,000 as permanent workers?” asked Zoleka Mbotshelwa from Westrand. “Either they open the gates so we can negotiate or we will burn the building if we have to.”

“Just because most of us are women does not mean we are incapable of being violent,” said Nosianga Mbombo from Soweto.

Five worker representatives were allowed into the building to present their grievances.

“They promised to forward the matter to the Minister and get back to us in seven days,” said Zoleka Mboleswa.

Pindile Motodlana from Eric Ndeleni clinic, Swaneville, said she has been doing HIV counselling and testing for 18 years. “When l started working we signed for R10 rand a day. After that we got raises to R800, R1,500, R2,500 and today we earn R3,500. We have lived on peanuts all our lives. I can hardly take care of my three children.”

However, on Wednesday, some workers in Hilbrow had already signed contracts, afraid they would not get their February salaries.

“It’s almost month end … What will my children eat?” asked Nomsa Radebe from Alexandra. She has been a health care worker for five years and she has two children.

GroundUp has attempted since Wednesday to get comment from the Department of Health.