Ward councillor says problem is across the metro 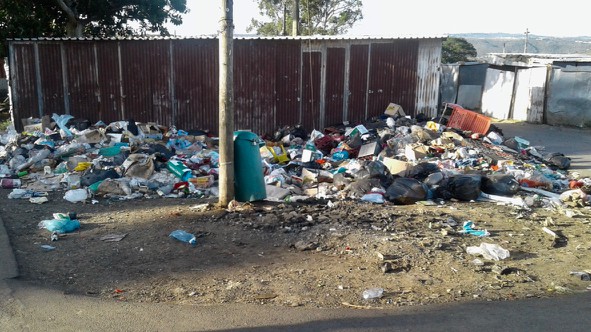 The streets beside Cambridge informal settlement in East London are lined with rubbish. Residents say the municipality has not collected the garbage for three weeks and they have received no explanation.

In the phase 1 section of Cambridge, community members said they had burnt piles of rubbish, but it was still piling up.

Resident Ntombizine Xaba said, “Our children play next to this garbage. And we also have people selling food not far from here.” She said the garbage also attracted rats. Xaba said the problem started early this year when municipal garbage collectors said that they would only take away garbage in bags and would leave the rest behind. But the municipality also stopped supplying black bags to residents.

“Where do they think we are going to get the garbage bags? They used to deliver them when they came to collect the rubbish,” said Xaba. She said people did buy rubbish bags but not everyone could afford it.

Another community member, who identified herself as Zanele, said, “I wish you can see the big rats that we have here because of this rubbish that has not been collected.”

Community leader Lawrence Jiba said people are supposed to take their rubbish bags to the streets on Thursdays when the municipal trucks collect. But, he said, residents take their bags on any day of the week and the bags get torn open by dogs. “It is very sad now that people must live with the stinking rubbish because municipal workers, who are hired to collect the garbage, are now refusing to take it,” he said.

Relu said, “This problem has been going on for a very long time and things got worse after the BCMM workers strike. To make things worse there’s no plan from the municipality to solve the problem.”

“I have asked for the rubbish bins [large skips] and the municipality is promising to give these to us next week, but that does not mean all the areas in my ward are going to get them,” said Relu. “If ward councillors were given an opportunity to hire people from the areas that are facing this challenge and monitor them, things would get better.”