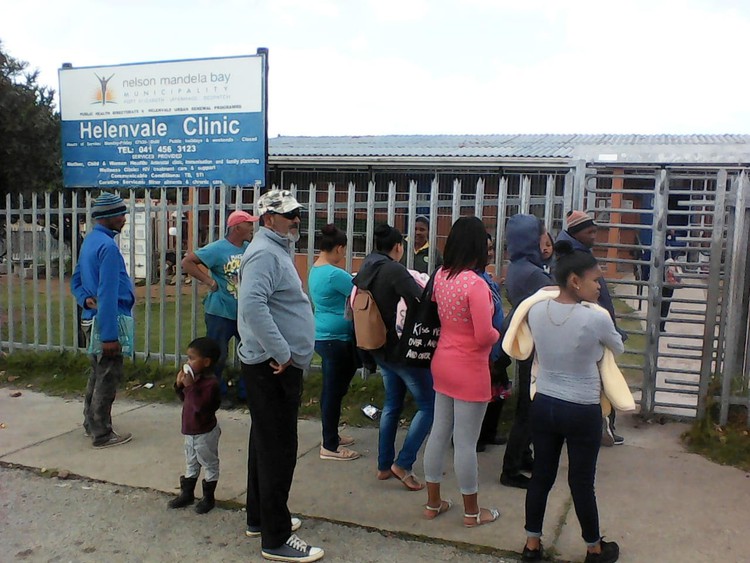 Patients at Helenvale Clinic were turned away on Wednesday as the clinic closed temporarily due to violent crime in the area. Photo: Joseph Chirume

A group of residents in Helenvale, Port Elizabeth, shut down their local clinic on Wednesday fearing for the safety of staff and patients after ongoing gang activity in the area.

Community members say Helenvale Clinic has been repeatedly targeted by criminals, who recently stole the air-conditioner.

As a result, the Helenvale Clinic committee decided to temporarily close the clinic and move equipment to Malabar Clinic, about three kilometres away.

“We had to take this decision after recent events that involved ongoing serious crime and shootings around the clinic,” said a member of the Helenvale Clinic committee, who asked not to be named for fear of being targeted. She said staff morale is low and that the six nurses who work at the clinic are overburdened and fearful.

“We were given permission by the Eastern Cape Health Department to use the premises at Malabar Clinic as a temporary measure,” she said.

On Wednesday evening the Department of Health said Helenvale Clinic would reopen on Thursday after an intervention by the police involving three specialised units to combat crime in Helenvale and other hotspots across the metro.

“This will assist us very much,” said Eastern Cape Department of Health spokesperson Lwandile Sicwetsha. “We don’t want a situation where our patients end up getting injured or killed by gangsters while visiting the clinic.”

Sicwetsha said the situation at the clinic was cause for concern. “Community safety is the responsibility of the police and the gang wars have been happening outside the clinic,” he said. “Safety of patients and staff is a priority. This matter is beyond our control, but we have to protect their lives.”

Police spokesperson colonel Priscilla Naidu said, “We have an intervention team comprising of thirty members from the National Intervention Unit, Tactical Response Team and the Public Order Policing Unit … They are here for the next two months. They will work in the northern areas and the Motherwell Cluster.”

The Helenvale Clinic committee member confirmed with GroundUp on Thursday morning that the clinic had reopened.