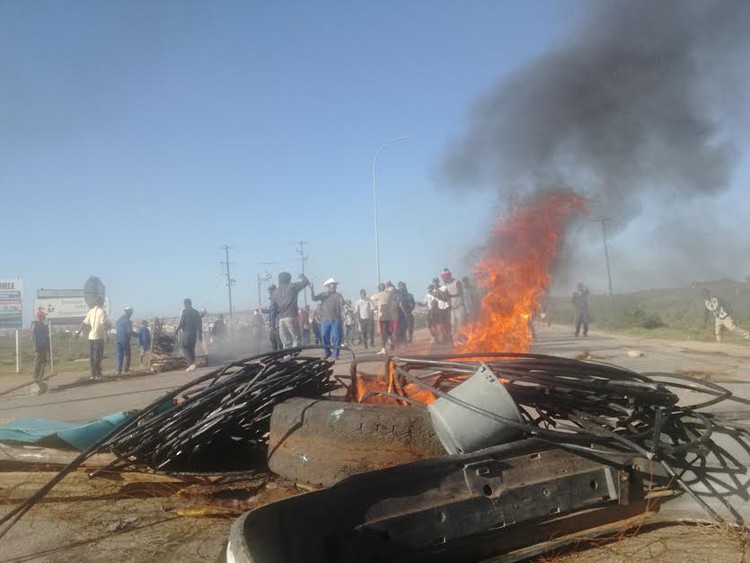 Bobani Village protesters burned tyres and blocked roads on Tuesday. They are demanding that promises made about electrification of the settlement be kept. Photo: Thamsanqa Mbovane

Residents of Bobani Village in Uitenhage have vowed to bar politicians from their settlement until promises made to them about electrification are kept. Protesters blocked roads with burning tyres and rocks on Tuesday, prevented learners from going to school and pelted the ward councillor’s house with stones.

“We don’t want politicians to set foot in Bobani Village again,” said protester Siyabonga Fila, who was one of more than 200 residents who burnt tyres on busy Rocklands Road on Tuesday morning, demanding the electrification of the settlement.

The protesters said politicians, including Mayco member for Infrastructure and Engineering Andile Lungisa, had made promises which they had not kept. At a previous protest on 29 January, Lungisa told Bobani residents: “We are not like other politicians who make promises that they will bring you electricity and water but fail to do so. We will fulfil our promise,” he said, promising a survey of the area to prepare for electricity.

Fila said: “The survey and the electrification promises did not happen, that is why we took to the streets.”

Fila said residents of Bobani Village (where there are over 3,000 shacks) would bar politicians from the area.

“From now on we don’t want them here again. They make this a place to come and lie. If they want to come again, they must bring electricity poles or forms for the survey, and nothing else.”

They also closed the gates of the Eastcape Midlands College while students were watching. “No school today. Just go home, all of you,” a protester shouted at students.

One student said, “We are writing exams today, but you guys are blocking the gates.”

The protesters went on to Thanduxolo Comprehensive Secondary School, which is next to the Eastcape Midlands College. They entered the school classrooms and told learners, “Get out now! School is out today!”

They marched through Bantom Street and blew whistles in front of Nkululeko Secondary School, in Bucwa Street, telling learners to go home. 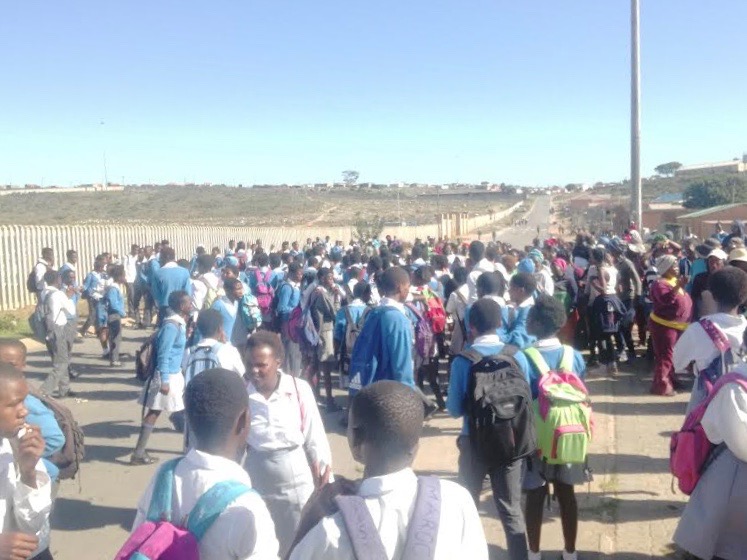 Fila said: “When we sneeze, the whole of KwaNobuhle must catch the flu.”

Just before lunchtime, protesters pelted the house of Ward 45 Councillor Siphiwo Plaatjies (ANC) with stones. All the windows of his four-roomed house were broken. Plaatjies condemned the violence, saying that he lived in the ward among residents and was always available when they wanted to see him.

Protester Zamuxolo Klaas said he had been selected for training on how to do the survey but had not been able to start.

“I was part of the three delegates selected from each of the informal settlements to be trained for the social survey. We were given contracts to sign, stating that we will do the social survey from 10 February to 10 April. Yet we have not been given any forms to give to residents. Everyday, the municipal officials tell us lies: today one of them is on sick leave, the next day they say we are coming, yet they never did, for two weeks.”

Eastern Cape Department of Education spokesperson Loyiso Pulumani condemned the closure of schools. He said, “It’s unfortunate that learners are made cannon fodder in community protests completely unrelated to their education.”

Lungisa said on 27 February there would be a budget adjustment during the council meeting. “We depend on the budget adjustment. We intend to bring services to all iindlovu (informal settlements) that we made commitments to,” he said.