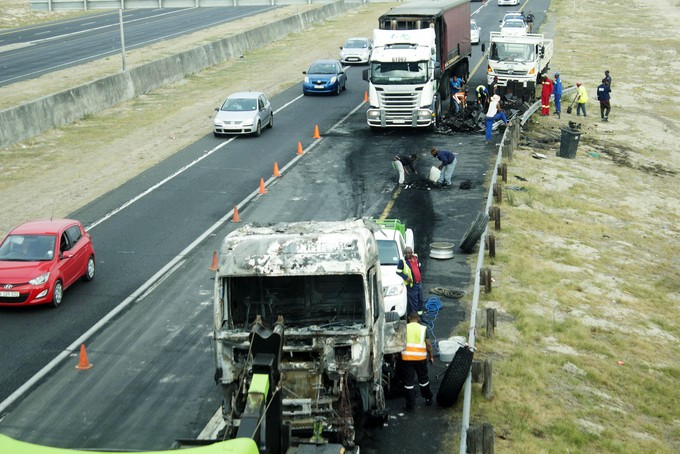 A truck transporting beer was set alight in the early hours of this morning on the N2. Photo: Masixole Feni

A protest over electricity in Tsunami, which is in Delft, turned violent this morning after protesters blocked the N2 and Symphony Way setting vehicles alight. A number of protesters were arrested. No injuries have been reported.

The protest came after residents claimed that the City refused to connect electricity in the informal settlement. Early this morning protesters headed to the N2 and Symphony Way, blocking traffic and setting a truck that was transporting beer on the N2 alight as well as a school bus on Symphony Way.

Tsunami Shack-dwellers’ secretary Kwanele Mcaleni said that the residents were trying to engage with the City and the Province about their electricity problem but that the City is refusing to connect electricity in the area as the residents are illegally occupying the land.

According to Mcaleni Eskom “don’t have a problem” with connecting electricity to the informal settlement, but it needs the City to authorise this.

Mcaleni said that the residents had “asked many times” but they are still without electricity.

“We must try [connect electricity to] the area as soon as possible,” said Mcaleni warning that if the City does not respond they will protest again. He said that issues with cable theft were also arising in the area due to the lack of electricity.

Residents also say that the darkness at night in the area means that there is a lot of crime.

Last year GroundUp reported on Tsunami residents complaining about the conditions in the area and asking to be moved.

The City’s Benedicta van Minnen who is the Mayoral Committee Member for Human Settlements said, “The City has engaged continually with the aggrieved group regarding their service delivery complaints. While we recognise the right of our residents to protest, we absolutely condemn the use of violence. This has a severely negative impact on service delivery for the broader community and it will not get the protestors anywhere.”