Fed-up after 20 years on a waiting list, gogo builds her own house 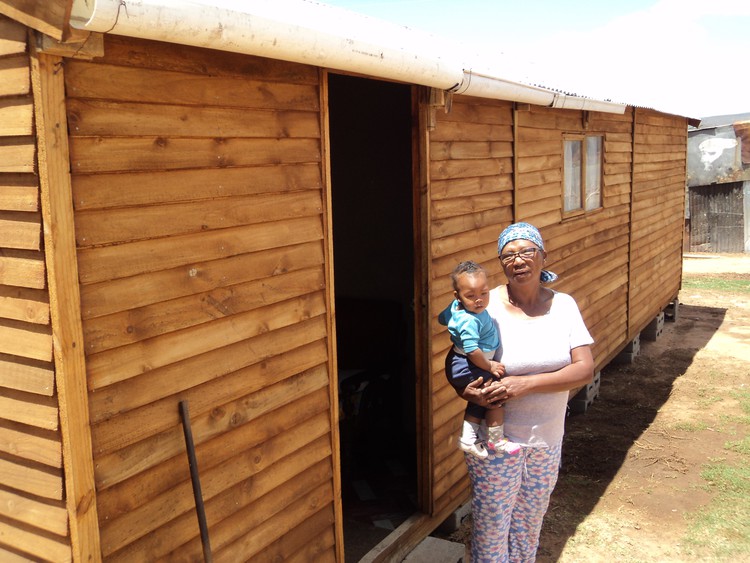 Gloria Matebe, who lives in an informal settlement in Oudtshoorn, collected her own wood and built herself a Wendy house. Photo: Mpumi Kiva

A 62-year-old woman who ran out of patience after waiting for an RDP house for over 20 years has built herself a Wendy house.

Gloria Matebe is a grandmother of two young girls.

She spent six months building her home from discarded pieces of timber that she collected from a nearby dumpsite in GG Camp informal settlement, Oudtshoorn.

The pensioner said she had been on a waiting list since 1998 but had lost hope of having a postal address of her own. Matebe said she had registered for a house while her two children were still young and had hoped to raise them in a decent home one day.

“l never thought l would still be waiting for a house today.”

In July last year with the help of two young men she started building herself a dwelling made of old planks discarded by a local timber company at dumpsite few blocks away from her shack.

The bungalow is fitted with a small kitchen, a sitting room and a large bedroom that can take up to three single beds. The roof is a zinc metal sheet. The house is varnished on the outside to make it look more attractive.

Lack of electricity in the area means many people come every Thursday to a nearby dumpsite to collect wood which they use to make fires for cooking. Matebe collected the wood there to make her home, which she shares with her daughter and two grandchildren.

She said she couldn’t stand living in a shack any longer. “l am getting old and l felt l couldn’t wait for a government subsidy any longer. I built this bungalow out of frustration. l wanted to spend Christmas in a more secure environment than a shack.” She can now lock her front door and the door to her room.

Matebe cooks outside because she doesn’t want any mistake to set fire to her new home.

Matebe’s neighbour Fennie Deimans said: “She is a strong woman. … Every morning she would go to the dumpsite to collect the planks and return home to build. She is the first person to own such a beautiful bungalow in this area.”

Deimans said she had also been on a waiting list for an RDP house for “too long”.

“This woman has inspired many of us.”