Four years later, no sign of water in these Pietermaritzburg taps 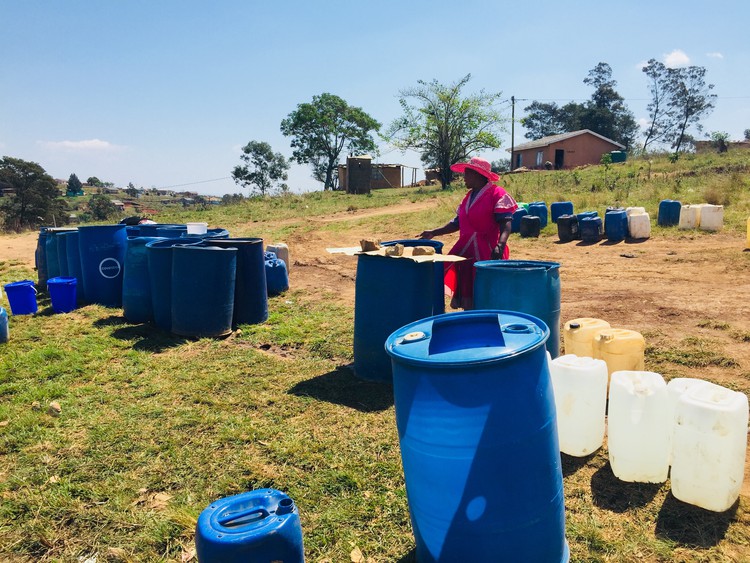 Maqongqo residents wait for a water tanker or take water from a dirty stream. Their taps have not worked since they were installed four years ago. Photo: Nompendulo Ngubane

The uMgungundlovu municipality in Pietermaritzburg has broken its promise to send contractors to Maqongqo to fix taps which have never had water since their installation four years ago.

At present residents fetch water from a dirty stream which they call Emarasteni.

The elderly women have to travel about four kilometres to the stream and they have to sieve cow dung from the water before using it.

A water tanker does come but not often enough, say the residents. The tanker comes twice a week and sometimes only once.

According to the residents who spoke to GroundUp their communal taps were removed in 2014 and 2015, and individual taps with water meters were installed at each house as part of a water project for Maqongqo. But the new taps have never worked.

Maria Maphumulo, 72, has a leg injury. Her husband is a wheelchair user. She fetches water from the stream in a five litre container and has to go there at least twice a day.

Seventy-nine-year-old Agnes Malembe said water delivered by the water tanker was not sufficient. “The only option is the stream,” she said. “No one is telling us what went wrong.”

“At our age we should be embracing the few days we are left with. We drink contaminated water, but we vote.”

Residents use one stream to do their washing and another for drinking water. They take turns clearing the streams and cutting trees and long grass. Cows and goats drink from the same streams.

Ward councillor Nhlanhla Zondo said the project was dependent on funds from the uMgungundlovu district municipality.

Municipality spokesperson Brian Zuma told GroundUp the municipality “will immediately process the outstanding payment due to the contractor”. He did not answer questions about why it had taken so long to bring water to the area.

“The contractor would return on site on Monday the 14 October 2019,” he said.

But according to residents, Monday came and went with no sign of a contractor and no water in the taps.