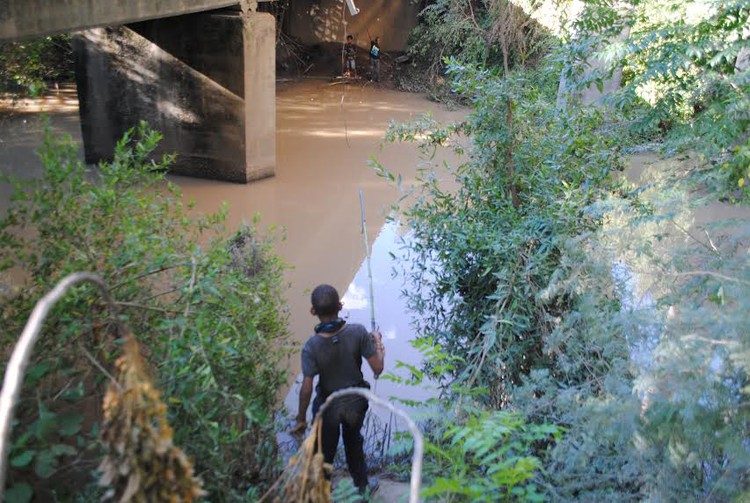 Children catch fish in the river near to a sewage pipe outlet. Photo: Mkhuseli Sizani

Emanuel Poeta, Elnino Van Wyk and Revone Trompetter fish in the Kat River near the Tower Psychiatric Hospital in Fort Beaufort. When GroundUp met the children, aged 10 and 11, on Monday, they were using homemade fishing rods, waiting patiently for a fish in order to get food for the day.

“Oom please, give us R5, we want to buy bread because there is no food at home,” said Emanuel. He said both his parents were unemployed and for years he had been fishing during school holidays and on weekends, when there was no school meal. “For me it’s better to be at school than at home because I am getting food at school everyday,” he said.

Not far from him a sewage pipe was pouring dirty water into the river.

“The water is smelly because of the drain. But I wash the fish before I eat it at home,” Emanuel said.

Clean water, an end to sewage flows and electricity stoppages were among the demands of about 200 residents of five wards across the town who marched to the Raymond Mhlaba Local Municipality offices on Monday morning.

The march, led by the South African National Civics Organisation (SANCO), started at 8am. Mayor Zingiswa Rasmeni addressed the protesters at 3:30pm. She said she had not received their previous petition which they said they handed over on 16 March in her office. Angry protesters hurled insults at the mayor and her council members, calling them irresponsible. They shouted “Genoeg is genoeg. You better come up with solutions or we will go back to the streets.”

Rasmeni told protesters she would accept the petition and respond within seven days.

Patrick Erasmus, SANCO chairperson in Raymond Mhlaba Local Municipality told GroundUp, “Our communities are sick and tired of empty promises by the municipal officials. For many years residents have been struggling with water. Taps have dried up and there are no water tankers as a back-up. People drink dirty water with animals from the rivers and dams. Rubbish is not collected.”

“In Newtown every day residents have water shedding from 5pm to 7am. Every week for two to three days there is no electricity. Both gravel roads and tarred roads are impassable in the entire municipality. It’s dark because there are not enough high mast lights and our people are easy targets of criminals. Sewage is running in the streets and dirtying rivers where people catch fish. Nepotism is rife here.”

Charles Anderson from ward 8 is a former municipal electrician. “This municipality is a disgrace. “Every week we experience electricity outages. Our meat is rotting in fridges. Our appliances are also getting damaged,” he said.

“Many people are unemployed. Some of them survive on social grants. The poorest of the poor including the children survive by fishing in the river. But the municipality is channelling sewage into the river because the drains are blocked and the sewerage system is not working.”

In ward 20 in Hillside which include villages, townships and the town centre, community leader Zwelakhe Stofile told GroundUp: “We have water reservoirs and water treatment works, but for six years our water taps have dried up. We are a family of eight and I am unemployed. In a week my brother and mother who is a pensioner spend R600 buying water in order to cook and do laundry.”

Stofile said the area’s 22 Jojo tanks had not been filled by the municipality in four weeks.

In response to questions from GroundUp, Nonceba Madikizela-Vuso, spokesperson for Amathole District Municipality which is responsible for water said the district municipality was hiring additional tankers which should arrive early next week. “We do apologise to our communities for the intermittent water supply,” she said. 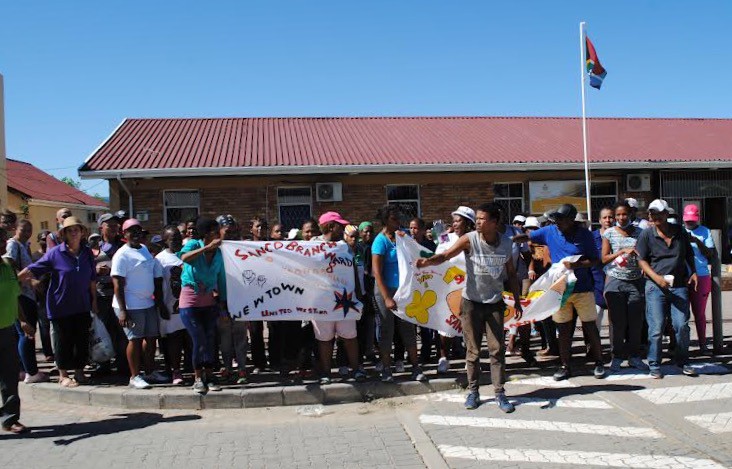 Residents of Fort Beaufort protested at the offices of the Raymond Mhlaba Local Municipality on Monday. Photo: Mkhuseli Sizani

When GroundUp visited, 73-year-old Nonceba Thembani was busy fetching water in a dam with her 10-year-old grandaughter Limokuhle. They took turns in pushing the wheelbarrow with two 20-litre containers.

“For 11 years I have been living in this place but half of those years I have been fetching the water from this dam. I am getting old now and my granddaughter is helping me during the school holidays,” said Thembani. “This is the third time today collecting the water to flush the toilet, bath and do the laundry for two grandchildren. My jojo tank water which my daughter bought for me is only for drinking and cooking.”

Litha Magocoba from Kwepileni in ward 20 said, “We are ratepayers but there is no difference between us and the township people. Our storm water drains and roads are not maintained, but we are charged huge rates. All the roads are full of potholes.”

Madikizela-Vuso said the water supply was being upgraded with money from a Municipal Infrastructure Grant . “Phase one of this project is underway (and includes construction of reservoirs, installation of pipelines and pumpstations) and will last for 12 months” Phase 2 would include the upgrade of the water treatment works, she said.