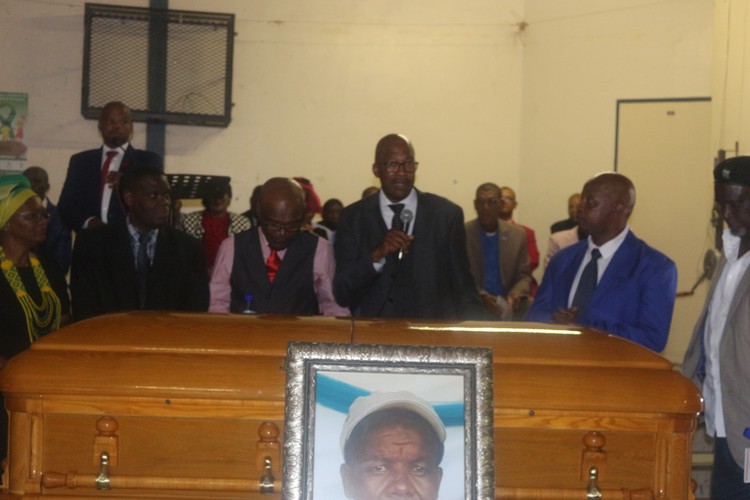 The death last month of “accused number 26”, Ivan Kazi, means that only 14 of the famous “Upington 26”, are still alive.

The 26 stood trial for the killing of a municipal police constable in 1985. All but one were found guilty of murder under the common purpose doctrine and 14 were sentenced to death sparking an international outcry. The death sentences were later overturned on appeal and most were given prison terms instead. Those serving prison terms were later released as political prisoners in the early 1990s.

Kazi, who died of cancer, had worked at the Dawid Kruiper municipality for 15 years.

Speaking at his funeral in Upington on 25 January, one of the 26, Justice Bekebeke, said while growing up Kazi’s nickname was “Kiss-madolos” [knock knees]. Bekebeke, who is the director-general of the Northern Cape Province, said Kazi had been brought in by the police at the identification parade in 1985 in order to point out those who were responsible for the killing of the police constable but instead ended up being accused of the killing.

“Some of us know little about how we got … freedom”, he said. “There were men and women who were prepared to give their lives for this freedom.” Bekebeke said Kazi had not demanded high office and had been satisfied with a labourer’s job.

He said Kazi had fought to open doors for others though Kazi himself had not had a chance to study.

Some political prisoners who had sacrificed for freedom were unemployed today, said Ngxanga.

Kazi is survived by his wife, two sons, two brothers, one of whom is the regional secretary of the ANC David Kazi, and a sister.

Another of the “26”, Albert Tywili, died in November last year.

From the original group, 14 are left. Gudlani Bovu, Zuko Xabendlini, Zonga Mokgatle, Boy Jafta and Sarel Jacobs are employed at the Dawid Kruiper Municipality; David Lekanyane and Fena Bostander are employees at the district municipality ZF Mgcawu. Neville Witbooi is a former municipal councillor. Barry Bekebeke, brother of Justice, is working at a youth detention centre. Kenneth Khumalo works for the Department of Cooperative Governance and Traditional Affairs in Upington. Tros Gubula lives and works in Namibia. Enoch Nompondwana currently lives in Johannesburg. Elijah Matshoba works at a hospital in Upington.

“We will look into it,” Melvin Smith, the ZF Mgcawu district director of the Department of Sport, Arts and Culture, told GroundUp.

CORRECTION: The original headline of the article incorrectly indicated that Kazi had been on death row. He had in fact been sentenced to six years in prison.