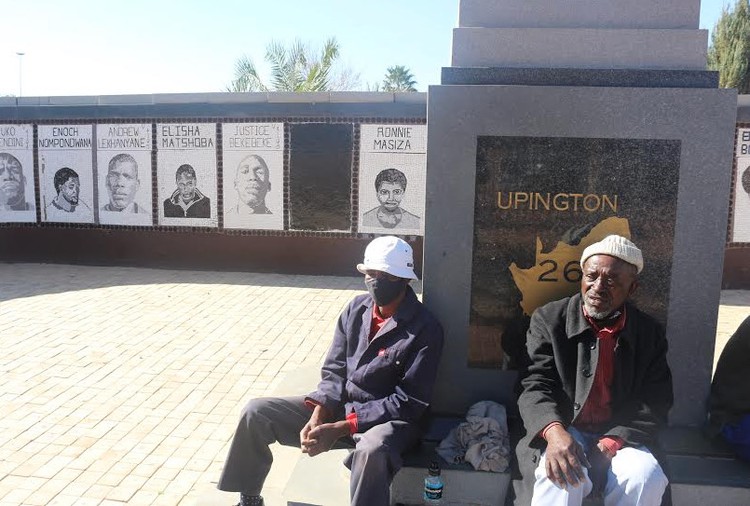 Happyboy Gusha, former MK soldier, and Zonga Mokgatle, former death row inmate who scratched out his picture with black ink on the mural behind them. Both are employees of the Dawid Kruiper municipality in Upington. Photo: Selby Nomnganga.

A former political prisoner has scratched out his own image on a monument to the “Upington 26” in protest at the lack of progress in the area.

Zonga Mokgatle, now 62, was one of 14 Paballelo residents sentenced to death in 1989 after the murder of a municipal policeman. The use of the “common purpose” doctrine by the apartheid state sparked international protests and the sentences were overturned on appeal in 1991.

Three were given prison terms. Mokgatle was sentenced to 12 years. Justice Bekebeke (the current provincial director-general of the Northern Cape) and the late Xolile Yona were sentenced to 10 years each. All were later granted amnesty.

Mokgatle is now employed as a cleaner by the municipality. “I pick up condoms, [sanitary] pads, dead dogs, and papers. That’s my work.”

On Tuesday he inked out the image of his face on the Upington 26 monument. Along with Former uMkhonto weSizwe soldier Happyboy Gusha, and fellow trialist Sarel Jacobs, now a driver at the local municipality, he posted the action on social media.

“I didn’t fight to get a monument,” says Mokgatle. “I fought to get a better life… which is a decent job.”

He says he and Jacobs were promised promotion by executive mayor Micheal Segede.

Gusha said: “We can’t allow men from death row to pick up papers.”

The mayor did not pick up his phone or respond to an sms or a voicemail message. Spokesperson Patrick Williams had not responded to our calls, messages and an email by the time of publication.

In 2019 another former death row inmate, Albert Tywili, died in poverty in Paballelo.