Former mine workers march to Parliament on Marikana day 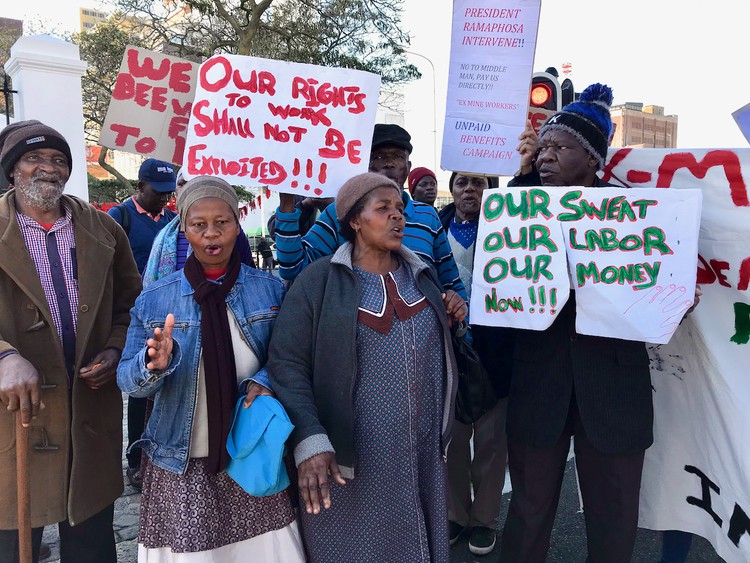 About 60 former mine workers supported by the Unpaid Benefits Campaign marched from Keizersgracht Street to Parliament on Friday. Photo: Tariro Washinyira

About 60 former mine workers supported by the Unpaid Benefits Campaign (UBC) marched from Keizersgracht Street to Parliament on Friday. They say they are still owed provident funds and other benefits.

No representatives from either the Department of Mineral Resources (DMR) or the Ministry of Finance came to accept their memorandum. They were told that parliamentary staff were at a women’s event.

Western Cape coordinator for UBC Lunga Guza said it is the third year they have marched to Parliament without getting any answers.

In a statement, they said they had chosen to march on “Marikana day” in commemoration of the courage of the workers gunned down six years ago.

Guza said money due to ex-mineworkers is trapped in investment funds “where it generates profits, not for the workers but for the fund managers who are already rich and earning very high salaries“.

He said the families of the ex-mineworkers, living in Khayelitsha, Nyanga, Gugulethu and Hout Bay, “continue to live in poverty while the sweat of their fathers and grandfathers is providing comfort to families who are already comfortable.”

“We have been telling them [government] that we have got relevant documents that can prove that these people were working in mines,” said Guza.

He said the workers had contributed to provident funds and paid for funeral cover, but had received no benefits. Workers had also died in mines and there was no compensation for their families.

Chairperson of a Western Cape group of ex-miners, William Casiwe, said he was 18 when he started working underground in 1981 in Stilfontein, Klerksdorp. He was paid R36 a month. They had no union then.

He has health problems and has not worked for the past six years. “I have high blood pressure. I am diabetic and suffering from a bone disease. My last child is doing grade 12 and he must go to university next year, but where is the money?” asked Casiwe.