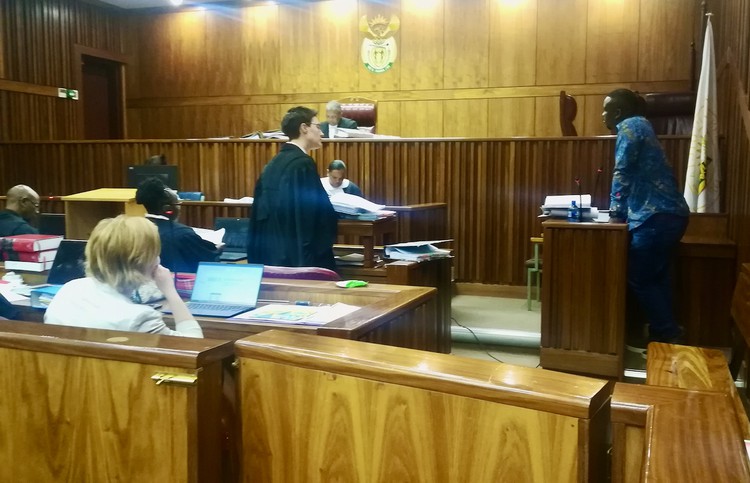 Xolani Zulu told the Johannesburg High Court on Wednesday that he still suffers from physical and psychological damage after he was assaulted by prison officials at Leeuwkop Maximum Correctional Centre in 2014. Photo: Zoë Postman

“At some point I even thought of killing myself. I felt so helpless and I was always thinking that someone was out to get me,” said Xolani Zulu. He was telling the Johannesburg High Court on Wednesday how he is still living with the consequences of what he experienced while a prisoner at Leeuwkop Maximum Correctional Centre.

He is one of five current and former inmates suing the state, alleging assault and torture by prison officials.

On Tuesday, he told the court he was beaten, kicked and given electric shocks on 10 August 2014, after he jammed his cell door with a toothbrush to prevent prison officials from entering. This was in protest over collective punishment.

The court case started on 28 October. Judge Ellem Jacob Francis is presiding and the plaintiffs are represented by Lawyers for Human Rights (LHR).

Zulu said he still suffers from migraines, lower back and hip pain. He cannot lift heavy objects and he still has problems urinating, which he blames on the electric shocks.

Zulu identified some of the prison officials sitting in the courtroom as the ones whom he alleges assaulted him.

Advocate Marumo Moerane, for the minister of Justice and Correctional Services, cross-examined.

He said Zulu was “completely unreasonable” for expecting to receive an immediate response from prison officials when he gave them the letter on a Saturday. He said the prison procedure is that a complaint will receive a response within seven days.

“For an inmate to block the cell door is a very serious matter,” said Moerane.

“Sometimes it’s the right thing because it got me the attention I needed. That’s why we are here [in court] today,” Zulu responded.

“Oh I see … so you anticipated that your obstructing the door would lead to an incident which would lead to a court action wherein you would be claiming damages for being assaulted?” asked Moerane.

“No, my anticipation was since it’s a serious issue to block the door, then they will listen to me. I didn’t anticipate that I would be assaulted like that or assaulted at all,” said Zulu.

Moerane said Zulu’s action prevented other inmates in the cell from getting medication or breakfast that day.

But Zulu said he did not have to persuade the other inmates to cooperate because they all shared his grievance. He said the inmates agreed that he would be the only one locking the door and they agreed not to open the door when the officials came.

“I would not have been able to block the door if the other inmates did not agree because I can’t overpower over 30 inmates by myself,” said Zulu.

The trial continues on Thursday.