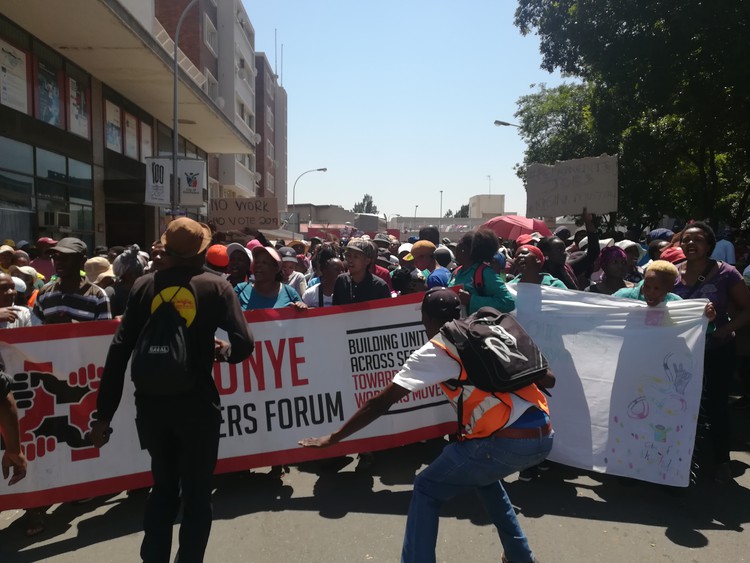 About 200 former municipal workers marched to the Civic Centre in Germiston to demand they be reinstated as permanent employees of Ekurhuleni Municipality on Thursday morning. Photo: Zoe Postman

About 200 former Ekurhuleni municipal workers took to the streets of Germiston on Thursday, demanding that they be reinstated.

“All we want is our permanent jobs … The only thing I am asking for is that they must not take my job away from me. How am I going to feed my kids?” asked Titus Nkosi. He was among those marching from the Casual Workers Advice Office to the Civic Centre. They believe they were unfairly dismissed three years ago.

At the same time, hundreds of ANC supporters also gathered outside the Civic Centre in solidarity for Ekurhuleni mayor Mzwandile Masina ahead of the DA’s motion of no confidence. Masina survived the motion and remains mayor.

The workers were employed under the Lungile Mtshali job creation programme, which started in 2014. They cleaned the streets, drains, old age homes, municipal buildings, cemeteries and parks. After the programme ended in June 2015, workers took the matter to the Commission for Conciliation, Mediation and Arbitration (CCMA). This, they said, was because they were not employed permanently after three months.

In May, Commissioner Timothy Boyce presided over the case at the Bargaining Council. He found that the municipality should have made the workers permanent. Boyce also ruled that about 200 workers should get R6,000 as compensation. But the workers were not satisfied and instead wanted their jobs back.

Nkosi is currently unemployed and said he struggles to support his family. “I couldn’t even afford to buy a train ticket to get here today,” he said.

Barrington Makamba, a former worker, said that after the CCMA ruling former workers met with municipal officials to inform them of their dissatisfaction with the outcome. “In our engagement with the municipality, Mr [Mzwandile] Masina made promises when he was campaigning to become mayor in 2016. [At the time] Masina said the municipality had space to take us in permanently.”

Makamba said whenever they attempted to engage with Masina, he would send his political advisors or other municipal officials.

“Even if Masina won the motion of no confidence today, our case remains. The ANC supporters came in buses to support Masina but tomorrow they will be gone and Masina will be stuck with us again. We are not leaving until we get what we want,” said Makamba.

The Mayor’s Office is yet to respond to questions by GroundUp. Themba Gadebe, spokesperson of the City of Ekurhuleni, denied that there had been any agreement during negotiations between the workers and the Municipality in September. This despite letters between the two parties, which GroundUp has seen.

Gadebe also said the workers had launched a review application of the R6,000 award which was currently being considered by the Labour Department.

“The issue has been dealt as a legal matter and is being handled through the courts.” Gadede said the employment of workers were dependant on different factors, one of the most important, he said, was the City’s finances.