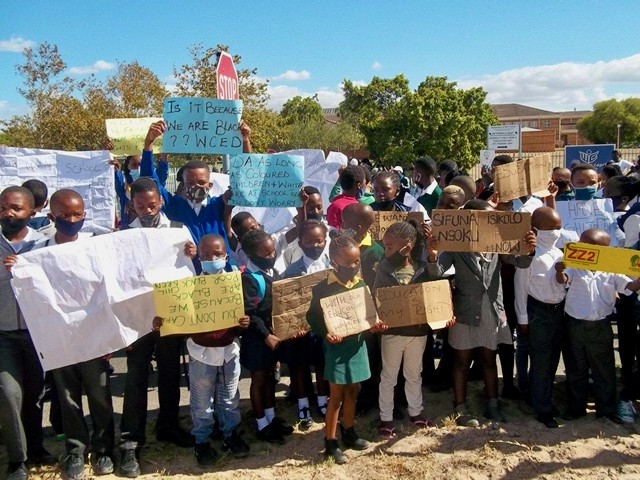 Residents of new RDP houses in recently developed Forest Village in Eersteriver, Cape Town, have been protesting for a local school.

About 2,500 families, who previously lived in backyards in Langa and Gugulethu, have moved into the houses since 2019, according to Forest Village housing steering committee member Nkokheli Ncamebele.

On Monday, dozens of angry parents and learners demonstrated outside the Metro East Education District offices, demanding that the Western Cape Department of Education (WCED) provide mobile classrooms in Eersterivier.

They sang, “We mean no harm. We just want a school”, and waved placards stating: “Without education, we have no future.”

“We agree with you because you can’t have a settlement without a school,” said Landeka Diamond, Director of Metro East Education District.

But Diamond said infrastructure officials tasked with searching for land suitable for construction of a school could not locate any.

The department was willing to transport about 500 learners to Homba Primary School in Khayelitsha, she said.

The education district is presently battling to place over 5,600 learners, excluding Forest Village ones, she said.

Community leader Zukisani Sibunzi said, “We reject an arrangement whereby our kids are transported to Khayelitsha. Grade R and 1 kids will be unsafe there … We know the department is unreliable and will give us irresponsible drivers who will leave our kids behind.”

Community leader Zolile Velebhayi said, “We want our kids to attend school nearby so that we can supervise them. They will get lost if they study far from Forest Village.”

Velebhayi said the community had identified land for mobile classrooms to be placed. But the department told GroundUp it is not zoned for education and is not an option.

Ziyanda Langa, who is in Grade 10 in Zisukhanya in Samora Machell, said she takes three taxis to reach her school and her mother is borrowing money to pay for it.

Claudia Kayser accompanies her two children to Spesbona High School and Bokmakier Primary School in Athlone. “I walked from school to school to apply for a place for my kids last year because I knew that I would stay here, but they all said they were full,” she said.

Nathan Adriaanse from Human Settlements said their department had engaged with the Department of Education and “at the time the education department confirmed that their current and planned school site provision was sufficient so that no schools were required to be made available”.

WCED spokesperson Bronagh Hammond said the department “has been engaging with the community since the end of last year” and was “investigating transport options”.

“However, they [parents] have refused to take up this offer as they want a school now, and in their community. They have identified land, which is not zoned for education purposes … It is therefore not possible to simply create a new school on land that does not belong to us and is not on our planning – it also requires various resources and budget … We do not have the budget to create [new teaching] posts suddenly,” she said.

Hammond said the department completed the Forest Village Leadership Academy in 2016 and the Apex HS in 2018. “These schools are literally on the periphery of the Forest Village. We also completed a new mobile school in 2019/20, called Apex PS, which was expanded with ten mobile classroom in 2020.”

“We are planning four new schools in the area,” she said.