UberEats, MrD Food and OrderIn pay from R15 a delivery 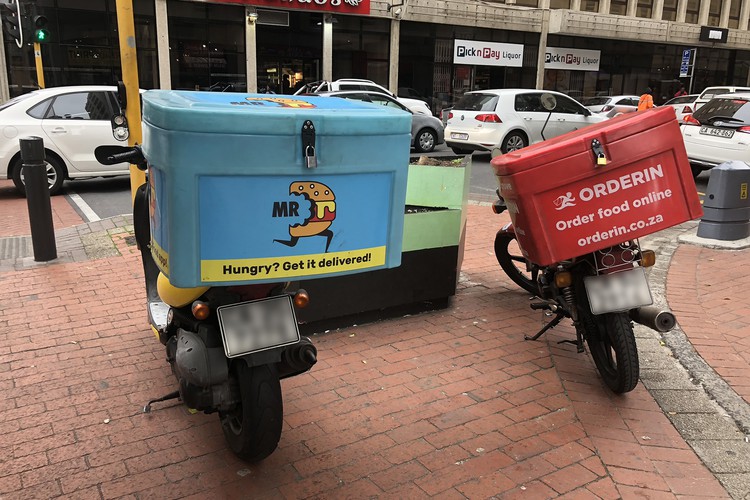 Immigrants working for food delivery companies like Uber Eats, MrD Food, and OrderIn as independent contractors say they are exploited. Often they use their own motorbikes, pay their own insurance and may earn as little as R15 a delivery.

Men from Zimbabwe, Rwanda, Burundi and DRC say they are in this kind of business because they are desperate.

Two of the three companies responded to GroundUp, but only one answered our questions on pay and working conditions. That company said that it was unlikely the drivers were not making profit.

Francois (name changed) is Congolese. He has a degree in accounting “but with an asylum document it is difficult to get an accounting job,” he says. He works for Uber Eats, operating on the Woodstock-Wynberg route. When he spoke to us in Rondebosch last week he was about to pick up an order. He is paid R14 for picking up food and R1.20 thereafter per kilometre. He asked not to be named.

“I really don’t like this job but I am doing it because there is nothing else to do and my family needs to be taken care of. I have been with Uber for three months. Making profit is dependent on how hard I’m working. I stay online nonstop, from 9am to 11pm. Data and petrol are expensive. Customers don’t really tip. The only benefit I get from Uber is an app,” he said.

He wishes Uber would help him with insurance in case of an accident. He says many drivers have been involved in accidents.

Samantha Allenberg, Uber spokesperson, said, “Uber Eats offers people, who want access to flexible opportunities, the opportunity to make some extra money delivering great local food.” She did not respond to our questions about pay rates or insurance, but suggested we contact other delivery companies.

Explaining the need for insurance, a Burundian man said he was involved in an accident in 2014 and still had trouble with his leg. He said OrderIn had refused to help at the time. “It would be better if the company would contribute towards insurance. We are on our own.”

“Since 2014 when I started doing this work I still get R20 for a delivery. In our last negotiations the company said if we are not happy with their offer we can leave,” he said.

OrderIn did not respond to questions sent by GroundUp, despite emails and several telephone calls.

A Rwandan delivery man said, “When it’s raining my job becomes more dangerous and I sometimes become involved in accidents. We have mates seriously injured, some even dying. But we do not have an option.”

The man who is contracted to MrD Food said that after deducting operating costs such as fuel, data, motorbike maintenance he battled to clear R800 a week.

He said contractors were paid between R15 and R27 per delivery, “depending on a number of factors”.

“Some independent contractors are supplied with a vehicle and receive a lower delivery rate. Some supply their own vehicles and deliver services further away, so they receive a higher rate.”

He said the company’s research suggested the drivers travelled on average 6km or less from collection to delivery. A Honda PCX150 motorbike, for example, could make 45 deliveries on a single tank of fuel, Musto said, “a clear indication that it is a profitable partnership”.

“In addition, 100% of all tips are also paid to independent contractors.”

Musto said, “We increase the rate yearly according to the country’s inflation rate and we make sure our partners comply.”

“The company is willing to assist independent contractors to obtain insurance on their vehicles, it sounds like a wonderful upliftment project and we look forward to engaging with the drivers to further this discussion,” Musto said.