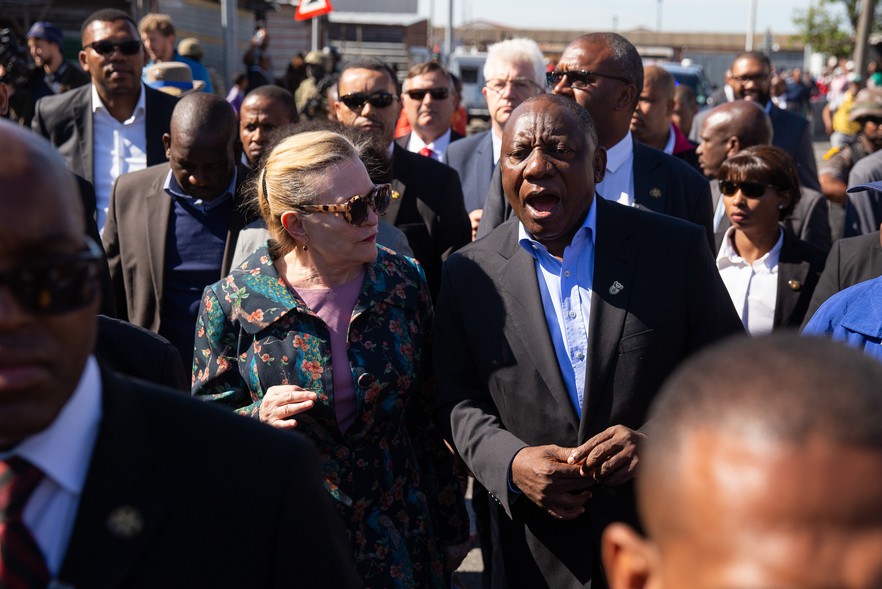 In 2018 President Cyril Ramaphosa and Western Cape Premier Helen Zille did a walk around in Hanover Park in Cape Town for the launch of the Anti-Gang Unit. Archive photo: Ashraf Hendricks

Parties pull out their final stops

The major parties closed off their campaigns with rallies this weekend: both the ANC and EFF were in Gauteng yesterday – the former at Ellis Park Stadium and the latter at the Orlando Stadium in Soweto – and the DA at the Dobsonville Stadium on Saturday. Besides those grand efforts – which tend not to have much sway with voters anyway – the most significant election-related developments over the weekend were:

And special voting started today with the discovery of abandoned ballot boxes in the streets of Tzaneen, Limpopo. The Electoral Commission is investigating, but the boxes are understood to have been empty of ballot papers so would probably not have been of much use to anybody.

Journalist and talk show host Karima Brown has now hauled EFF leader Julius Malema to court after the EFF chief ‘doxed’ her – revealed her phone number on social media. As a result Brown received rape and death threats from people she believes are EFF members. She laid a criminal charge with the police and also approached the Independent Electoral Commission (IEC) to punish the EFF. The IEC had invited Malema and Brown to a voluntary conciliation process, but that was unsuccessful so Brown approached the courts, asking it to rule that Malema and the EFF breached terms of the electoral code of conduct. According to Malema, the people who threatened Brown with violence are not EFF members but added that didn’t mean Brown ‘is not an ANC mole, an ANC agent’. Brown told News24 last night that Malema doxing her was part of a pattern of threatening journalists. ‘I won’t be cyber bullied and censored by any politician,’ she said.

At about the same time as his boss was calling out other politicians for being corrupt, EFF number two Floyd Shivambu was accused today of an alleged cash-for-business deals scam. Investigative journalist Susan Comrie from amaBhungane reports that SMSes and WhatsApp messages suggest he twice asked businessman Lawrence Maluadzi for an intervention – ‘code for cash’, says Comrie. ‘The messages suggest that in exchange Shivambu used his position as the EFF’s second-in-command to secure meetings and potential business deals for Mulaudzi,’ says the report, which you can read in full here.

Just a week after Cyclone Kenneth devastated northern Mozambique, another severe storm, Cycline Fani, made landfall on the other side of the Indian Ocean at the weekend, leaving a swathe of destruction through parts of India and Bangladesh. The storm has left at least 42 people dead, thousands have been displaced, and there are food and water shortages in a wide area. Recovery efforts are under way in 10,000 villages and 52 urban areas.

On any given day the Black First Land First (BLF) is a menace contender but from now on the party will have to remove its ‘Land or Death’ slogan from the emblem on its hat before it tosses it into the menace ring. This morning the Equality Court ruled that the BLF’s slogan constitutes hate speech and ordered that it remove it from their regalia, social media accounts and website. The court also ruled that a copy of the judgment must go to the director of public prosecutions ‘for possible institution of criminal proceedings against the BLF and its leaders’. Best of all, though, the party must tender a written apology to all South Africans within a month. We can just see the BLF president penning his apology:

When we said Land or Death we were completely taken out of context and misquoted by the capitalist journalist pig-dogs. We have been ordered to say sorry … so sorry … sorry for you!

Banks may be forced to invest in coal

The ANC’s head of economic transformation, Enoch Godongwana, has rattled some cages with his comments to Carte Blanche that government may make it mandatory for banks to invest in coal by declaring it a ‘prescribed asset’. The party is investigating whether to force pension funds to invest in ‘prescribed’ developmental projects. His comments follow the announcement by some banks that they are withdrawing investment in coal (over environmental concerns, as many investors are doing globally). A report by Bloomberg said such a move could destablise the country’s R4-trillion pension industry.

After surprising market commentators in recent weeks by remaining relatively strong in the face of all kinds of unsettling pre-election news, the rand has finally started to wobble a little. This morning it weakened slightly, and commentators pointed to uncertainty over the election outcome.

Liverpool take it to the last match

Liverpool ensured the English Premier League title will be decided on the final weekend when Divock Origi scored a late winner in a thrilling 3-2 victory at Newcastle on Saturday. The win sent The Reds two points clear at the top of the table, but Manchester City have a game in hand. City take on Leicester tonight and then travel to Brighton in the final round of matches on Sunday. Liverpool take on Wolves in their final match. In the race for the Champions League places, Chelsea moved up to third and confirmed their spot with a 3-0 win over Watford yesterday, while Spurs are now virtually assured of fourth despite leaving the door open for their London rivals when they went down 0-1 to West Ham on Saturday. Arsenal have an unrealistic mathematical chance of edging ahead of Spurs but their 1-1 draw with Brighton has probably ensured they will play in the Europa League next year – unless they win the Europa League this season. Yesterday Manchester United produced a limp performance that was reminiscent of the Mourinho era and their 1-1 draw with Huddersfield ensured they are in the Europa League playoffs next season. Cardiff’s 2-3 loss to Crystal Palace on Saturday confirms they will drop to the Championship with Fulham and Huddersfield.

The Bulls moved to the top of the South African Super Rugby conference with a 28-21 win over the Waratahs after surviving a strong fightback from the Australians. Handre Pollard’s three penalties proved the difference after both teams scored three tries each. While the Bulls moved up to second on the overall log, the Sharks were the heroes after they held the Crusaders to a 21-21 draw in Christchurch – the only league points the New Zealand team have dropped on the field this season (they were awarded a draw with the Highlanders when the match was abandoned on March 16). Late on Saturday the Jaguares beat the Stormers 30-25.

Wallabies fullback Israel Folau reportedly rejected a 1 million Australian dollar (R10,1 million) offer from Rugby Australia to cancel his contract ahead of his code of conduct hearing. The Australian media reported that Folau rejected the offer before the start of his hearing after his homophobic postings on social media. The offensive post remains on his Instagram account as the record try-scorer’s legal team began their argument over the weekend that he was merely quoting scripture.

And the winner is …

Fifty-four days after the South African Film & Television Awards, Enver Samuel and Simon Wood had their own private Saftas ceremony. Just before the ceremony began on March 2, the award for best documentary short was withdrawn, leaving directors Samuel and Wood disappointed, and the third nominee, Carte Blanche, consulting lawyers. Questions had been raised about the ownership of Carte Blanche’s entry, a rhino poaching investigation titled Follow the Guns, and the National Film and Video Foundation (NFVF), which manages the Saftas, decided to withhold the award while it resolved the issue. Samuel was upset that he missed his ‘And the winner is moment…’ Last week, after a legal wrangle, Carte Blanche’s entry was disqualified and Samuel eventually had his “And the winner is…” moment, which was followed by his own name. His documentary, Someone to Blame: The Ahmed Timol Inquest, followed the reopening of the inquiry into the death in police custody of the anti-apartheid activist in 1971.

Some say Lionel Messi is the GOAT of football players. Some argue for Cristiano Ronaldo. But can Ronaldo do this little trick that the Argentinian has perfected?

A prisoner in Oklahoma has served four days hard time and now wants $5-million from the sheriff’s officers. Dustin Lance is suing jail officials claiming they ignored his pleas for medical attention from an erection that lasted 91 hours and responding to his request for medical attention by mocking him. Lance had been locked up on burglary and drug possession charges. While he was behind bars he swallowed an ‘unidentified pill’ given to him by a fellow inmate. He complained to the prison staff of unbearable pain the next day, but wasn’t taken to the hospital until three days later. According to AP, a settlement conference has been scheduled, an indication that the sides may be close to reaching an agreement.

Tamaryn Shepherd (@ExMi) has us crying too with this tweet.
My dad sent me this and I’m crying. Someone had one job. 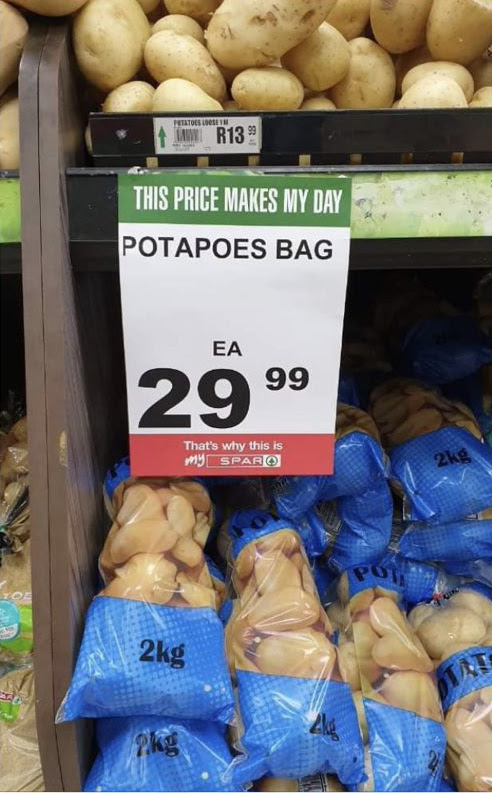 Today’s clue, compiled by the.news.letter’s favourite cruciverbalist Kieron Callaghan, is: Does one write about circuital verbs? (14)

The solution to Friday’s clue, Insincerely respect vicar with epilepsy problem? (3,3,7), is PAY LIP SERVICE an anagram of ‘vicar’ and ‘epilepsy’ (‘problem’ is the anagram indicator), a term for ‘insincerely respect’.

If you’re fed up with news about the horror of war, politics, environmental disasters, corruption and Man U, then this story is for you: It’s about how a growing army of mayonnaise haters are working towards a mayo-free future (God bless ‘em).

News at the weekend that former president Jacob Zuma and ANC secretary-general Ace Magashule had a hand in the formation of the African Transformation Movement (ATM) party was both shocking and not surprising at all. Not surprising because both have reportedly been conspiring to weaken Cyril Ramaphosa and thus undermine his efforts to clean up the ANC (and there have been rumours about their involvement in the ATM). But shocking because there seems to be no limit to their duplicity. Whatever the outcome of the election, we hope it empowers Ramaphosa at least enough to rid the party and politics generally of this rotten duo. And in the meantime we can at least enjoy the irony of Zuma and Magashule being involved in an organisation called the ATM … you couldn’t make it up.