He should have been allowed to speak, but the Danish journalist is not the free speech champion he is made out to be 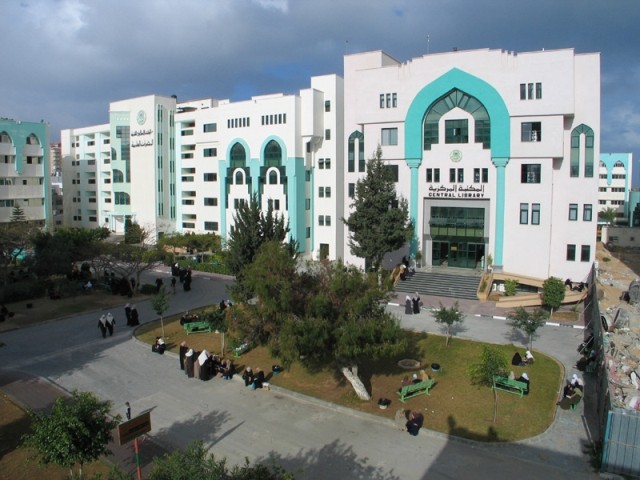 Main library of Islamic University of Gaza. The university was bombed by Israel in 2008 (long after this photo was taken) in a military campaign supported by Jyllands-Posten, the newspaper for which Flemming Rose worked. Rose visited Israel months later as a guest of the Hebrew University of Jerusalem. Photo: Wikipedia (CC BY-SA 3.0)

It was a poor decision to invite Flemming Rose to deliver the UCT TB Davie Memorial Lecture on academic freedom, and an even worse one to stop him speaking.

Rose was invited by the university’s Academic Freedom Committee (AFC) in a process that no-one has suggested was improper. A colleague pointed out to me that the speaker for such an important event hosted by the university itself — as opposed to a department or organisation on campus — should not have been left in the hands of so few, and that the invitation process needs to be improved. But that’s at best an issue of hindsight, and not one I necessarily agree with.

Jacques Rousseau, the AFC chair, has pointed out that blocking Rose because of a security threat is legitimate. Having no inside knowledge of security at UCT, I can’t contest this, despite weariness about using security threats to stop events. But, as Rousseau argues, vice-chancellor Max Price’s letter explaining the decision to stop Rose speaking went beyond security.

Once invited, the UCT Executive should have respected its own process. By preventing Rose from coming, it has breached academic freedom, damaged the reputation of the university and the lecture, and perhaps made it harder to get suitable people to deliver the lecture in future.

It was especially intolerant that a compromise solution of having respondents debate Rose was rejected. That would have been a wonderful change to the dry format where the speaker delivers a nearly hour-long monologue, by the end of which most of the audience is barely awake.

Rose was a poor choice, but not because he was likely to say anything hateful as suggested by Price and others. On the contrary, having read and listened to a sample of his interviews in English, his take on free speech appears to be quite standard, irrespective of what one thinks of the 2005 cartoon controversy when, as culture editor of Jyllands-Posten, Rose organised the publication of satirical cartoons of the Prophet Muhammad, one of which depicted him with a bomb in his turban. The terrorist responses to this and Charlie Hebdo as well as the intense security under which Rose has to live, show the considerable risk of satirising Islam.

But Rose is not consistent in his defence of freedom of expression (and the related concept of academic freedom). The other great censorship issue in Europe and North America today is the criminalising of activism against the Israeli occupation of the Palestinian territories. Glenn Greenwald and Andrew Fishman describe it as the “Greatest Threat to Free Speech in the West“. Here are a few examples they give:

France has taken measures to criminalise advocacy of Boycotts, Divestment and Sanctions (BDS) against Israel. So has Canada. The UK government is trying to stop public bodies and some university student unions from refusing to buy Israeli products. The US Congress is also targeting BDS advocacy. Pertinent to academic freedom, Steven Salaita’s appointment to the University of Illinois Urbana-Champaign was withdrawn by its Chancellor when he tweeted anti-Israel sentiments.

It’s possible that I’ve missed it, but I can’t find a word said against these violations of free expression and, in some cases, academic freedom by Rose. Perhaps he has said something in Danish, or occasionally in English, but it seems he is almost mute on the subject at best. This is not whataboutery. We can’t expect Rose to comment on every free speech issue; there are too many. But the suppression of activism against the Israeli occupation is the elephant in the free speech room that some of the loudest free speech proponents ignore.

It’s worse than mere silence in Rose’s case. Jyllands-Posten expressed unequivocal support for Israel’s attack on Gaza in 2008, during which the Islamic University of Gaza was bombed — an extreme violation of academic freedom. If Rose condemned this I can’t find it. He has been foreign affairs editor since 2010, and the newspaper is worse than indifferent to Palestinian civil liberties.

In April 2009, Rose was hosted in Israel by the Hebrew University of Jerusalem. You can watch videos of him talking about the cartoon controversy to the delight of Israeli media. If he criticised the bombing of Gaza’s university, or Israeli suppression of Palestinian political activity, it is hidden in Google’s depths.

It’s notable that the AFC’s Professor David Benatar, who was involved in and has defended Rose’s invitation, shares his inattention to Palestinian humanity. Benatar has argued that Israel is a “robust liberal democracy” (see page 14 of the link) rather than a systematic oppressor of the civil rights of millions of people because they aren’t Jewish.

If in future a critic of Israel, such as Salaita, is invited, the same pretext for stopping Rose might be dredged up. Most of all it is a pity that the opportunity was lost for UCT members to question Rose about his commitment to free speech and academic freedom when it comes to Palestinians.

Read a response to this article is here.

Views expressed are the author’s alone and not necessarily those of other GroundUp staff.