Workers complained they were not being paid for overtime 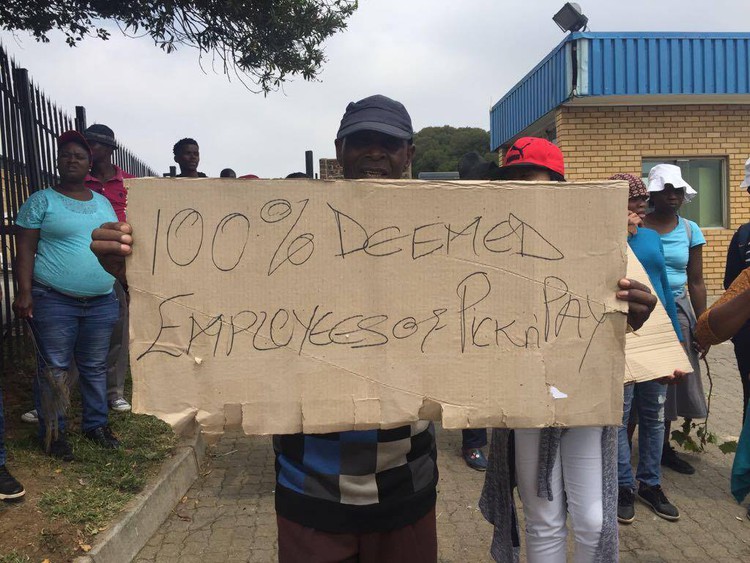 Bakers for Pick n Pay are hired by third-party companies, making it difficult for them to organise. Photo supplied

A five-week strike by workers who produce baked goods for Pick n Pay appeared to end on Monday. The Johannesburg workers concluded reconciliation talks with management, resolving a strike that had been ongoing since 28 February.

The strike, which became protected on 2 March, began in protest at unfair working conditions, including long working hours, salary disputes, and unpaid overtime.

“We are demanding R10,000 a month, 40 hours a week, and no more than two hours overtime a day,” said Mandla*, the strike committee’s leader and a 7-year factory employee, before talks began.

The outcome of the talks resulted in Assist Bakeries committing to pay all employees at least R3,500 a month and ensuring that the weekly work roster does not include any shifts that exceed eight hours. The company will also begin contributing to labourers’ provident funds.

One striker, Thabo*, who has worked at the factory for nearly 12 years estimated that he spends 12 hours each week on the production line in unpaid overtime.

The 58 workers involved in the strike are all employed at a facility housing independent bakery operations located in Isando on the East Rand. The bleak conditions, workers and strike representatives say, are due in part to the fact that workers are not employed by Pick n Pay, where the goods they produce are sold, but instead by several third party labour brokers known as Assist Bakeries.

According to Pick n Pay representatives, the facility, owned by the grocery chain, was set up as a Black Economic Empowerment initiative through which several independent bakeries employ labourers on site. The fractured employment model makes it difficult for workers to organize and represent themselves.

“They are taking advantage of us because we don’t have a union,” Mandla said.

David North, Group Executive of Strategy and Corporate Affairs at Pick n Pay, said that the issue is a wage dispute between independent bakeries and their employees. “All employees are remunerated by their employers strictly in accordance with the Labour Relations Act,” North said. He also said the project had been “successful in transferring skills and in business training for entrepreneurs.”

According to Mandla, the company had refused to meet with protesters until the 3 April talks.

As the strike wrapped up its fifth week, workers began to feel the effects of more than a month’s lost wages, putting pressure on a settlement. “Some of us are breadwinners, so it is hard,” said Thabo, who supports eleven people on the R3,200 monthly wage he earns at the factory.

Bakery workers have agreed to return to work on 10 April, even though the demands set at the outset of the movement have not been met.

“I am not happy, but they know we are desperate,” Mandla said.

* Not their real names.