SANTACO distances itself from the operators 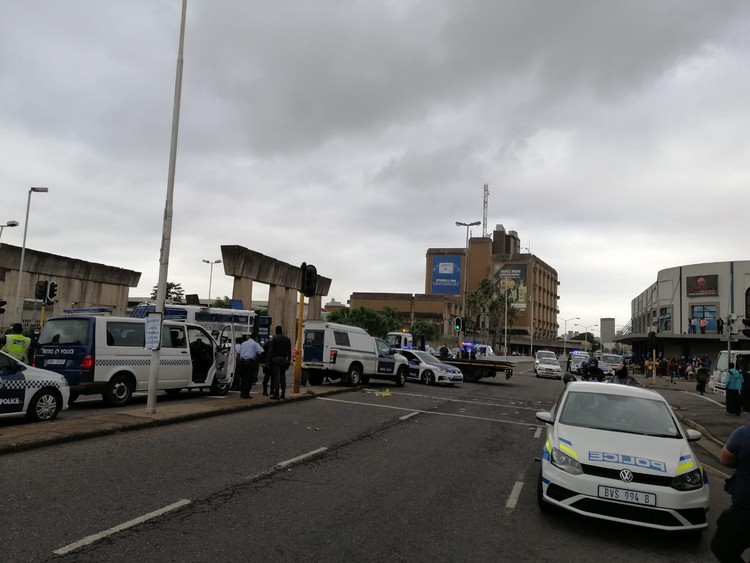 Five taxi operators were arrested on Thursday for public violence for their alleged involvement in blocking busy roads and disrupting traffic in and surrounding central Durban.

Commuters across the city were left stranded, some having to walk long distances after being forced to get out of taxis run by other operators.

During an incident behind the City View Shopping Centre, Greyville, which GroundUp witnessed, a taxi was stopped and a group of about ten men, who claimed to be taxi operators, forced the passengers to get out. They said taxi operators from other areas were not allowed to transport people on their routes.

They claimed that their drivers were being arrested by Durban Metro police for permit issues as well as impounding their taxis.

Sibongile Ntanzi, who was carrying a baby, told GroundUp that she was travelling into the city on a bus from Phoenix, when they were stopped by the taxi operators. “The driver was forced to stop and while we were waiting to see what was happening, a group of four people entered the bus and told us to get off. They looked angry and it was scary. I have to walk all the way to the market with this baby because no other taxis would pick us up,” said Ntanzi.

Taxi commuter Nolwazi Ngiba, from Inanda, said, “They should address their issues with Metro Police and not us. Why do we have to suffer for this?”

Sifiso Shangase, KwaZulu-Natal provincial manager for the South African National Taxi Council (SANTACO), said Durban Metro Police were doing their jobs. “We apologise to the affected commuters for the inconvenience caused this morning. The people who were doing this are tarnishing our name. It is people who are not members of our association, just people who are operating because they saw a gap and used it,” he said.

Shangase said the police have a right to arrest people breaking the law. He said if an operator’s permits expired and there is no proof that they applied for new ones, then those people should be arrested.

Senior Superintendent Parboo Sewpersad of the metro police said, “Many taxi operators avoid coming to our offices because they know they have outstanding warrants but we cannot allow them to operate without permits that is why we are conducting these operations.”