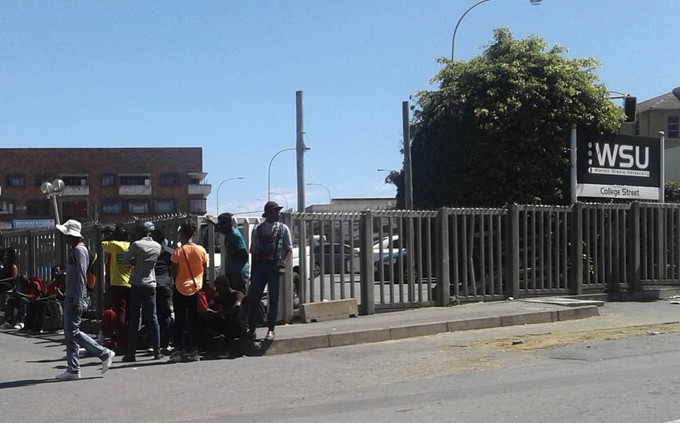 By Nombulelo Damba-Hendrik and Siphokazi Vuso

Several campuses at Walter Sisulu University have been shut down and registration has been frozen following a dispute over fees.

Students are demanding free registration for students from quintile one, two and three schools and also for students continuing their degrees.

Buffalo City campus South African Students Congress (Sasco) chairperson Zolile Zamisa said students had been trying to meet university management since last Thursday. He said the university wanted students with debt to pay 20% of their debt before they could register.

Zamisa said they were questioning the use of money from the Department of Higher Education. He said an amount of R1,5 million had been injected into the university through the National Student Financial Aid Scheme (NSFAS) and students wanted this to be used for new registrations.

But WSU spokesperson Yonela Tukwayo said the money had already been used to pay for past debt.

Zamisa said until university management agreed to a meeting, registration would be stopped.

Some students were not happy with the action. Luvo Mtila, a second year Electrical Engineering student, said he was doing a semester course from January to June.

“We should have started already. I fear that it is going to be hard to finish this semester and the course itself is very difficult. Now, there will be a lot of pressure in the classroom,” he said.

A first year student who did not want to give her name said she had spent R400 to travel from Mthatha to East London to register, only to find the administration shut down. She now had to find accommodation.

“We are new here and most of these guys who are protesting are doing third year,” she said.

“We cannot allow this because the institution will be getting into a situation of bad debt … As much as we hear the students’ demands, it is difficult to allow,” she said.