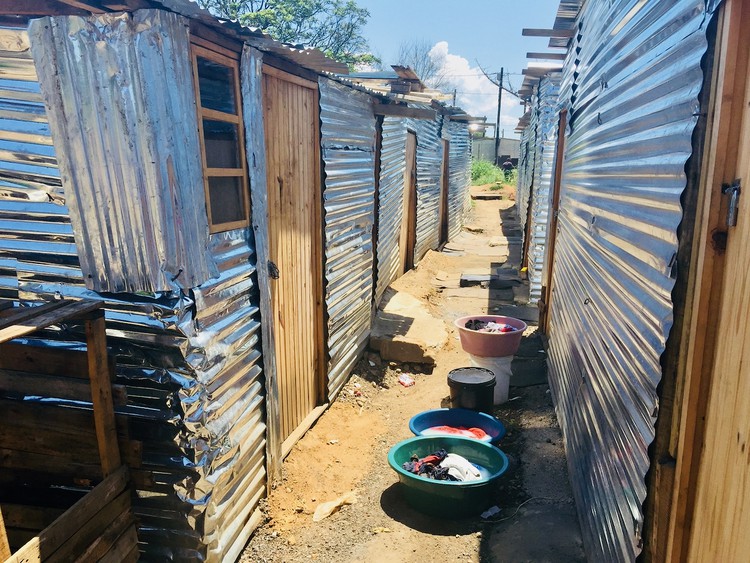 Residents displaced by a fire in Jika Joe informal settlement were given materials to build temporary housing nearby. Photo: Nompendulo Ngubane

Residents of Jika Joe Informal Settlement in Pietermaritzburg relocated after a devastating fire in December are demanding to be moved to a more suitable site.

Almost 100 shacks were gutted by the fire and 164 residents displaced.

After the fire, acting MEC for the KwaZulu-Natal Department of Human Settlement Peggy Nkonyeni and Msunduzi Mayor Mzi Thebolla visited the fire victims.

Nkonyeni had promised them that they would be relocated to suitable land and a site next to Jika Joe was identified by the department and the municipality.

Msunduzi municipality spokesperson Thobeka Mafumbatha said that during the levelling of the site it appeared there was a water problem. She said two trenches were dug to channel the water to a nearby river.

“This was not completed at the time due to the December [holidays] shutdown,” she said.

Residents say the area is waterlogged and their homes are flooded when it rains.

“No one deserves a life like this,” a resident, who did not want to be identified, told GroundUp. He said he had been living in Jika Joe for over a decade before his shack went up in the fire.

“The Department of Human Settlement gave us the building material – doors, windows and corrugated iron – to build our houses. They are not properly built. They leak when it rains. Some of us have no experience of building a house. Residents assisted each other,” he said.

He said there had been nine mobile toilets initially, but these were removed a few weeks after the relocation. Some residents are using toilets they have built themselves.

He said there was no water supply. “Residents get water from the white houses [nearby]” he said.

Nobuhle Bhengu, who had been living in Jika Joe since 2010 until she was displaced by the fire, said, “There is water from a trench that we use for washing clothes … Sometimes people from the white houses lock the taps or ask for R2 for each container. We don’t have that money, we are unemployed.”

“All we need is help. We are hungry and desperate,” said Bhengu.

Ward Councillor Sureya Reddy (DA) said, “A high embankment has been formed to prevent burst rivers flowing into their homes. Human Settlements and Msunduzi housing has offered this piece of land to the fire victims as a temporary measure after the fire. I have contacted disaster management twice in regards to flooding.”

Reddy said a bulldozer had been sent to re-dig the drainage trenches.

KZN Human Settlement spokesperson Mbulelo Baloyi said the municipality and the department are presently developing the nearby Jika Joe Community Residential Units which will assist eligible housing beneficiaries who earn between R800 and R3,500 per month.