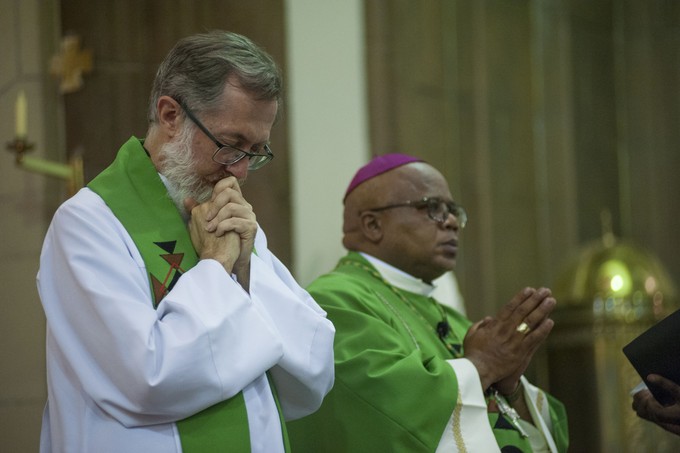 A special prayer for peace at tertiary institutions was held at the Holy Trinity Church in Braamfontein last night. The church, which borders Wits University, was used as a refuge by students and as a makeshift medical centre during the violence which erupted at the university and surrounding area last week.

The prayer was led by Bishop Duncan Tsoke and Father Graham Pugin and was well attended by students from Wits and the surrounding areas. Pugin was given a hero’s welcome by the congregation for his efforts in trying to protect students from police last week. His upper lip had a scar from where a policeman’s rubber bullet struck him at close range. Dramatic images emerged last week of Father Pugin facing up to a police Nyala and others of him bleeding after being shot.

“Beyond the violence in our streets is the violence in our hearts,” commented Bishop Duncan Tsoke when addressing the crowd. The Bishop also urged all parties involved in the crises to begin talking to one another. “Peace is impossible without dialogue. Dialogue so that we can meet each other and not fight.” Tsoke noted that the fight for free higher education has foundation but that he cannot condone the violence enacted by all sides in the conflict.

Pugin indicated that Pope Francis had called on churches to be field hospitals in places of conflict and that The Holy Trinity Church had heeded the call and will continue to act as a treatment centre. “I would not be intimidated to allow an armoured vehicle travelling at high speed towards me to enter this safe and sacred space where a frightened cowering crowd of street people and students was seeking the sanctuary that the church promises them,” said Pugin in reference to the moment he blocked a police nyala from entering the church property.

Pugin thanked everyone for their support and prayers and indicated that he is recovering well. He also thanked the press noting that the presence of the media makes it very difficult for injustice to be done secretly. As he ended his address he even joked about starting a new hashtag. “We make the call for peace and negotiations. Perhaps we shall call it #feesmustfallpeacefully.”

After prayers, students rushed to greet Pugin and thank him for his help and sacrifice. “When the crowd disappears we can take some selfies at the front gate [the scene of the standoff with the nyala],” he joked.

“Father Graham is a true soldier of God. He now bears a scar that represents the struggles of the university students for free education for all,” said Bishop Duncan Tsoke.