Feasibility study for Tafelberg to be released tomorrow 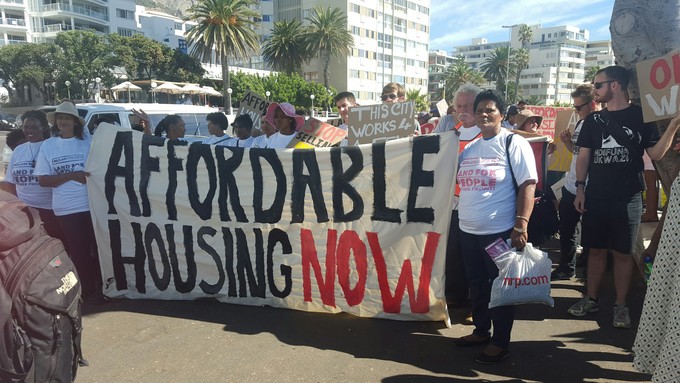 Reclaim the City has been campaigning for affordable housing in the City Bowl and Sea Point for low-income families. File photo: Mary-Anne Gontsana

The Department of Public Works and Transport announced today that it will publish its affordable housing feasibility study on the Tafelberg property in Sea Point tomorrow. About 20 activists from Reclaim the City and and Ndifuna Ukwazi gathered outside the department’s building in Dorp Street this afternoon to seek an answer to whether or not the department had confirmed a date of publication. The group dispersed after a department representative came outside to address them and announce tomorrow’s publication.

The announcement comes after protesters sat and blocked access to the building on Tuesday for about two hours, demanding to meet with the Western Cape Government’s Chief Director of Public-Private Partnerships Thiagaraj Pillay to discuss the department’s failure to release the study last week as it had claimed it would.

The activists said they expect the government to hold true to its promise not to keep extending the deadline. “For us, tomorrow is tomorrow. That is the deadline,” said Elizabeth Gqoboka, a leader of Reclaim the City. “We have waited long enough.”