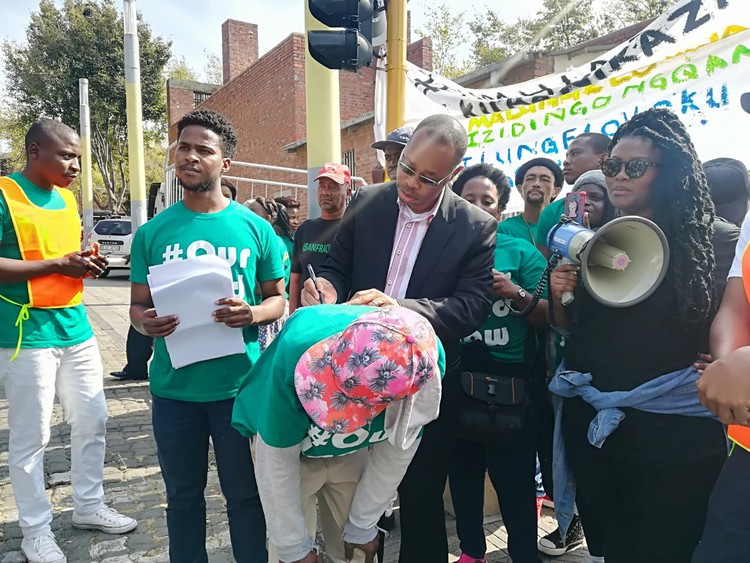 About 100 people, mostly farm workers, marched to the Constitutional Court on Friday to demand better living and working conditions, as well as land, for farm workers. Advocate Vela Mngwengwe from the Department of Rural Development and Land Reform signed the memorandum. Photo: Zoë Postman

On Friday morning about 100 people, mostly farm workers from various provinces, marched from Pieter Roos Park to the Constitutional Court in Braamfontein to demand better living and working conditions for farm workers.

The group also called for the Department of Rural Development and Land Reform to sign a moratorium that will stop farm evictions.

The march was organised by activist organisation Tshintsha Amakhaya. Other organisations like Women on Farms and Association for Rural Advancement (AFRA) joined the march.

Magritta Prins from Women on Farms in the Western Cape said they were marching because they wanted to protect the rights of farm workers, stop evictions and secure land.

“We want to have our own piece of land so that we can do something for ourselves like growing gardens or sheep farming,” said Prins.

There is a lot of abuse towards us farm workers …It’s really bad and we want it to stop,” she said.

Susan Smith used to live and work on a farm in Wellington in the Western Cape for 20 years before she was evicted four years ago.

She said 23 households were evicted from the farm and moved to zinc houses, where she currently lives.

“The farmer threw us out like dogs a week before Christmas … We were moved from proper houses to zinc houses with no flooring,” she said. “Those places are too small for our families and when it rains, the roof leaks and we get wet.”

She said she hopes the department will assist with proper housing or land to build their own houses. “On the farms, we were happy … Our kids didn’t know this life of drugs and crime. But now we are living a dangerous life,” said Smith.

The memorandum was accepted by Advocate Vela Mngwengwe from the Department. He said the department would respond within 30 days.

The march was also in support of a court case against the Department about the slow processing of labour tenant land claims. The case was heard at the Constitutional Court on Thursday.

Nokuthula Mthumunye, spokesperson for AFRA, said that AFRA and the Legal Resources Centre (LRC) launched class action litigation at the Land Claims Court in 2013 because they realised that the the department was not processing labour tenant land claims. Some tenants had been waiting for over 20 years.

Mthumunye said the LRC then applied for an appointment of a Special Master to assist the department with the backlog of land claims. A Special Master is an external person appointed by a court to oversee the process.

“The Special Master will make sure that there is a plan, that there are budgets allocated and the people who have lodged claims will know how far their claims are,” she said.

In 2016, she said the LRC won the case at the Land Claims Court but the department appealed the judgment. The matter went to the Supreme Court of Appeals which overturned the judgment, rejecting the appointment of a Special Master.

“We were here [at the Constitutional Court] yesterday to appeal the decision made by the SCA and to say that land claims must be processed with urgency, because the department has really been dragging its feet,” she said.

When accepting the memorandum, Mngwengwe said the department was “truly sorry” for what has happened to labour tenant applications.

“Things did go horribly wrong … But I believe they can still be corrected,” he said.