“It is unfortunate that in this age people are still being treated like animals.” 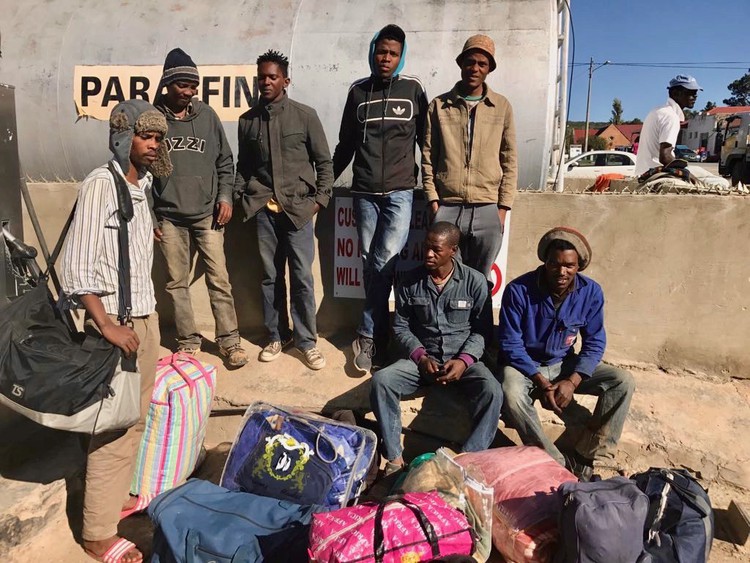 These men were dumped in a remote town after a wage dispute with a farmer. Photo: Joseph Chirume

Fourteen men brought to Addo to work on a farm picking oranges and lemons say the farmer never paid them. Instead, he drove them out to a remote town and dumped them 200km from home.

They also allege he threatened to shoot them if they did not get out off his vehicle.

Lusanda Ngam, 34, says that earlier in May they were told by a man who works in Addo that there was a farmer who needed 16 strong men to work on his farm. He and his friends recruited 14 men in Middledrift, 20km from Alice, who were looking for jobs.

“We sensed trouble upon arrival when the farmer said he wanted our Identity Books as surety for the money he had spent on transporting us,” says Ngam.

“He paid us very little money in our first week. He said he was deducting the money he had spent on transport. He also told us he deducted money for electricity, water, mattresses and food. We ended up being paid less than R100 each.”

Ngam says the farmer was abusive, calling them lazy and incompetent. They asked him to return their IDs and to pay them out.

“He became very angry and said he would not give us anything. We insisted and he eventually returned our IDs, but he refused to pay us any money. He said we owed him a lot a money,” says Ngam.

They were offered transport in two bakkies. At first they thought the farmer was going to leave them in Alice at the place where they had taken the taxi to the farm. But the farmer dumped them in Paterson, 200kms from Middledrift.

“We refused to get out. He eventually told us that if we insisted on refusing he was going to shoot all of us. We quickly got out of his bakkies afraid that he would kill us. He then drove off … We had no money even to buy air time to inform our families back home about our plight,” says Ngam.

Six of the men were able to get rides to Alice, but eight were stranded.

One of the men, Siyanda Siganga, who lives in Alice and has two young children, says, ‘We were finally helped by a councillor in Paterson who contacted his Addo counterpart, councillor Simphiwe Rune. They took us to Addo Police station where we slept for the night before they arranged a car for us on Saturday that left us in Alice.

“We are broke and penniless. What are we going to give our children who had expected much from us? Who is going to help us so that we get our money that the farmer owes us?”

The farmer, Jabru van Schalkwyk Fourie of Weltevreden Farm, says, “I owe them nothing. These guys were recruited on my behalf by a third party but I sponsored everything including transporting them from Alice to Addo. I also have to pay the man who recruited them his commission. We agreed that I was gong to deduct the following amounts of money from each of their wages, thus R300 for transport, R200 for food and R100 for using my mattresses. They also had to pay electricity.

“They did not work in the first five days because it was raining, so there was no pay. Anyhow, I managed to give them some money for food and to motivate them. At the end, it’s me who has lost more money than what they claim.”

“They were also lazy and always complaining. At last they demanded their IDs because they said they wanted to go home. I asked for the money they owed me. I dropped them in Paterson because it is convenient as there is a main road where they could get transport easily to Alice. I never threatened them with a gun, because I don’t have a licence to own a gun. You can check my records.”

As to the promise of R1,500 a month and also how much he pays his other workers, Fourie says, “They could have earned that amount had they worked hard. We pay R95 a crate of lemons and if you pick by the bag then you earn R2.60. There are people who earn R2,000 a month a fortnight because they work hard. These guys didn’t work”

Addo councillor and Speaker for the Sundays River Municipality Council Simphiwe Rune said, “We came to these men’s assistance after seeing their desperation and suffering. We also took into consideration that they were left in the open this time of the year. We had to do something to ensure they got overnight accommodation and transport back home. They slept at Addo Police station on Friday and on Saturday we arranged a car that took them to Alice.

“It is unfortunate that in this age people are still being treated like animals. Some unscrupulous farmers here hire people from far away places, including bringing illegal immigrants to their farms, because they don’t want to abide by the labour laws of the country.”

Sergeant Majola Nkohli confirmed that “eight men came to Addo Police station on Saturday morning to report that they had a problem with their farmer employer.” He said they did not open a case.