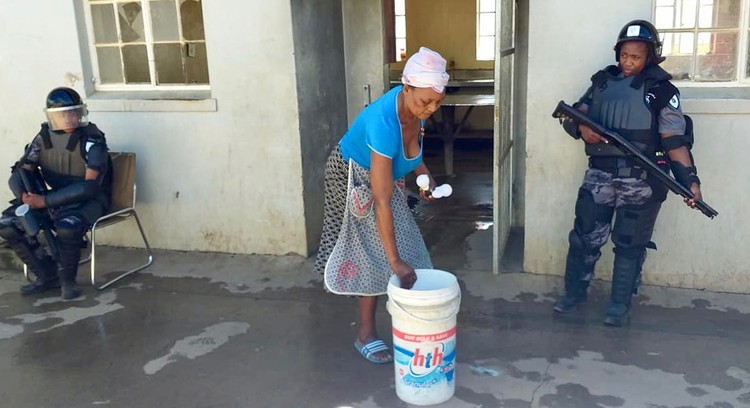 Armed security oversee the eviction of the May family from their home on Tuesday. Photo supplied by Women on Farms

A family of ten is gearing up to fight a court judgment that forced them off the farm which was their home for 38 years. Windmeul Kelder wine farm hired armed security to be present at the eviction of the family on Tuesday. The family was left on the roadside with their belongings and no roof over their heads.

The evicted family are Zonwabile and Sweetness May, their children – Dumsani, Zola, Sinazo and Azola (aged between 15 and 37), and grandchildren – Anoxolo and Ivile (aged nine and 11), together with Elna Brown, who is dating Dumsani, and their child, Charlton, aged nine.

Brown said security guards arrived on Tuesday morning. “It was around 8am and the children were still sleeping when the securities arrived with papers telling us to leave. We tried putting up a fight, but our parents said we would be hurt … We should let go.”

When GroundUp contacted the family on Thursday, Sinazo was sobbing. “We have not bathed nor had a proper meal since Tuesday. There are people trying to assist us, but we need help urgently.”

Sinazo said the family had lived for 38 years on the farm. She said her parents are old and do not have any strength left to fight.

Carmen Louw, director of activist organisation Women on Farms Project, said it is common for farm owners to evict former employees. “Since Zonwabele stopped working on the farm, the owner started eviction proceedings against the family. We are busy with a lawyer drafting an urgent application to have the eviction judgment set aside.”

Billy Claasen, director of the Rural and Farmworkers Development Organisation, said it believed the court had made an “error in judgment” by granting the eviction order without stating that the family should be offered alternative accommodation.

“It is clear in this case that if you don’t have the money to litigate, you will lose even if you have a strong case,” he said.

Zonwabele said his troubles started a decade ago. “I was fired in 2008 after I was accused of selling alcohol, someone took a video of me with beers under a tree.”

Sinazo said her father never sold alcohol. “He was drinking when the cellphone video was taken. After firing him, we continued to stay on the farm, but it was hard because we received threats.”

Brown has been staying with the family for 15 years. “We received letters telling us that we must leave the only place we called home. We had a lawyer, but we heard that the lawyer reached an agreement with the farm owners that we must be out by January this year,” she said.

“The Extension of Security of Tenure Act (ESTA) places an obligation on the Department of Rural Development and Land Reform to intervene and assist farmworkers with access to legal representation. The Land Claims Court did not order Drakenstein Municipality to provide alternative accommodation in this case, and the evictees also at no stage requested assistance or alternative accommodation from the municipality,” said Marthinus.

He said the municipality had offered the May family temporary accommodation. “We also provided them with food parcels and water, which were delivered to them. The evictees, however, indicated to municipal officials last night that they did not want alternative accommodation from the municipality.”

Asked if municipality has plans to deal with pending eviction cases which may affect thousands of people living on farms, Marthinus said, “The municipality is aware of the scale of evictions within the jurisdiction and is proactively planning to assist within our resources. Furthermore, the municipality has meaningful engagements to discuss alternatives to evictions and also produces a report to the court.”

In response to Marthinus, Claasen said they were appalled by the premises the municipality had offered the family. “It is a small structure connecting to toilets on the property. When you stretch your arms, you can touch both walls. It’s only big enough for two people. There are already 52 tents on the property,” he said.

Claasen added that his organisation approached the Wine and Agricultural Ethical Trade Association (WIETA) to call on its members [which Windmeul belongs to] to halt evictions until proper housing solutions for displaced families are implemented.

“We as NGO’s also want an urgent meeting with the President to discuss issues affecting farmworkers,” he said.

Amelia Heyns of WIETA said the organisation was currently helping to find alternative accommodation for the family. WIETA also questioned the manner in which the eviction order was executed.

In a statement, CEO Linda Lipparoni said, “Any court decision around security of tenure should take into account the moral obligation and impact on evictees.”

Lipparoni urged the Drakenstein Municipality “to provide interim shelter and then longer term accommodation solutions for this family and many other farm dwellers whose human rights are infringed on during lawful eviction processes”.

She said WIETA has evoked its Incidents Reporting and Code Violations Protocol regarding Windmeul Kelder.

In a statement on Wednesday, the directors and management of Windmeul Kelder said the May family’s eviction was “the culmination of a nearly decade long process at a large financial cost and prejudiced Windmeul”.

It said that the first notice was delivered to the family in July 2017. “Windmeul further held a meeting on 4 April 2018 with the occupiers in an attempt to amicably resolve matters. On 30 April 2018, Windmeul obtained an order from the Land Claims Court,” it stated.

The company said that the family was given extra time to move their belongings before the sheriff of the High Court obtained a warrant to evict the family.

“The occupiers conduct, in brief, includes: destruction of property, overcrowding and the illegal use and sale of narcotics and alcohol which forced Windmeul to bring such eviction proceedings,” it stated.

Windmeul said it sympathised with the family and that the process was “regrettable”.