“Is this the life of a full time voter?” 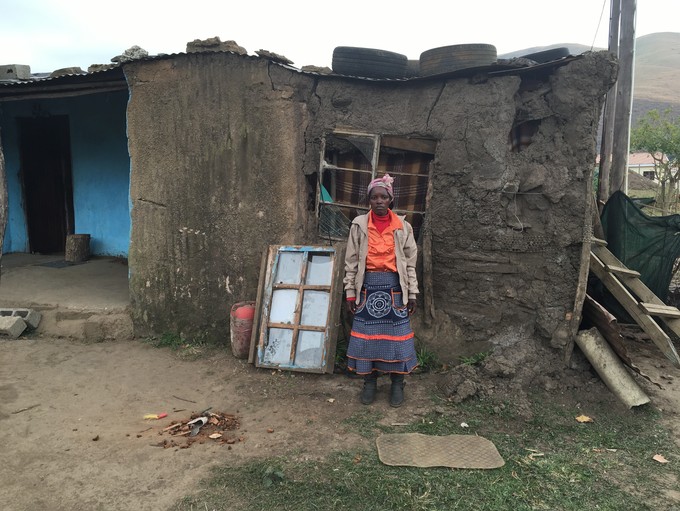 Ntombini Mnikathi outside the mud house where she lives with her family of five. Photo: Ntombi Mbomvu

A family of five has been living in a crumbling mud house for well over a decade. Ntombini Mnikathi, 51, applied for an RDP house in 2012 and has been waiting ever since. Less than a kilometre from her home stand completed houses that are unoccupied.

Rain and wind keep the family awake at night. They move in with their neighbours, afraid the house will collapse. Its broken windows are covered by old blankets.

Mnikathi lives in Snathing, ward 11, Pietermaritzburg, with her husband, Sibusiso, who is 57, and their three children – Linamandla, Lungelo, and Sphumelele – aged 8, 14 and 20.

Her husband does piece work, such as gardening, earning R120 a day. Two of the children receive government support grants of R350 per month.

Mnikathi says when she applied for an RDP house she was told she was a special case and would be prioritised. She says she has had numerous meetings with her ward councillor since, but to no effect.

“What breaks my heart is that while I’m living in a dangerous house, next to my house there are completed, empty houses. No one stays in those houses and it’s been a while. How heartless is that?”

When it is rainy and windy, she says, “I look through my window and look at the empty houses and ask myself, is this the life of a full time voter? I attend community meetings each time and I have been voting since 1994.”

“I attend meetings just to have an idea of how long I have to wait. It’s the usual empty promise that we are used to,” says Mnikathi.

Ward councillor Sipho Madonda said he was aware of her situation.

“All houses that are built in that area have owners.” He said the reason the houses were not occupied was that they were not complete, were without roofs or windows.

“Human Settlements is trying to sort out the problems that occurred. Once those problems have been talked over and sorted, the project will continue. Mnikathi is on the list of the people to benefit from the project. I’m aware that she needs a house. Her matter will be attended to,” he said.

The houses opposite Mnikathi’s house are not without windows or roofs.

Spokesperson for KZN Department of Human Settlements Mbulelo Baloyi said the project would be back on track soon. “We had about 291 houses to be built … If Mnikathi did apply for a house, she could be next when the project returns,” said Baloyi.