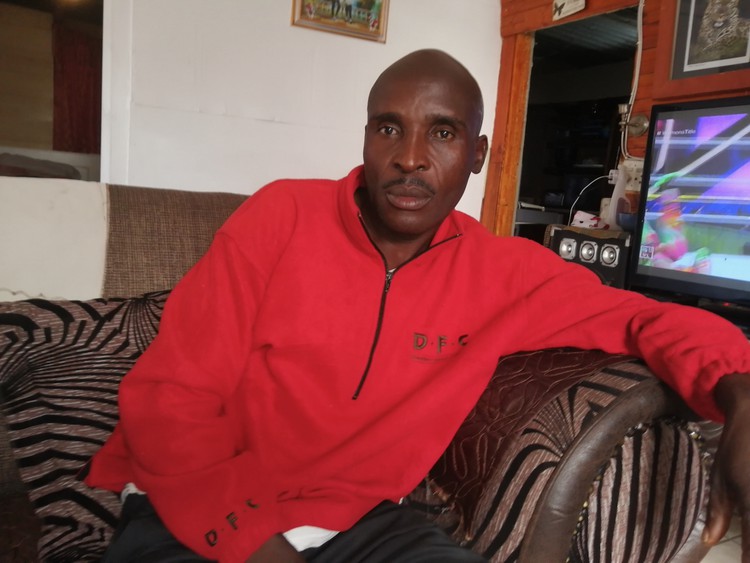 Richard Chinembiri’s eyesight has been affected since he drank homemade beer. His brother and five other men have died, apparently from methanol poisoning. Photo: Thembela Ntongana

On 2 June, we reported the death of six Zimbabwean and Malawian nationals from Masiphumelele, assumed to have died from methanol poisoning after drinking homemade beer. Since then two of the men have been discharged and two remain in hospital. Family members told GroundUp, the survivng men have severe damage to their eyesight.

“I am eight-months pregnant with two other children, and my husband, our provider, is gone. I honestly do not know what we are going to do now,” said 33-year-old Sania Rungana, who is unemployed.

Her husband, Tapera Edward Kuseni, died at False Bay Hospital a week ago.

“My husband started drinking on Saturday. He came home and slept and drank again in the evening on Sunday. The person selling the alcohol was our neighbour. We didn’t think anything of the alcohol and the bottles had no writing on them,” said Rungana.

According to her, her husband paid R20 for a 500ml bottle. She saw him mixing what he had called homemade beer with coke and milk.

She said on Monday morning her husband couldn’t speak and “seemed confused”.

“He was supposed to go to work that day. At first I thought he was just hung over, but when I saw that he was getting worse I called the landlord. By that time he was not speaking, he couldn’t see, and didn’t know what was happening,” said Rungana.

“We now have nothing, no food, no money to pay rent, and my child back home in Zimbabwe wants to go back to school. How will I pay for it now; I can’t work because I am heavily pregnant? … My husband took care of all of us. Even family back home depended on him,” said Rungana.

Kuseni’s brother, Richard Chinembiri, said: “I was drinking with my brother on Saturday and Sunday. And on Monday morning I was to wake up early and go to the market. But I had a severe headache and I thought I was still hung over.”

He had not at first thought that the problem was related to the alcohol.

“I went with them to the hospital and we had him [Kuseni] admitted and I came back home, but things started getting worse – the headache was worse and I couldn’t walk properly. I was admitted into hospital the same night my brother died,” he said.

He was discharged days later, but he still feels weak.

“My eyesight is not good. I can only see things that are close by and I have constant joint pains and headaches. I could have died,” said Chinembiri.

“I want my eyes to get better because without them I can’t work. With my brother gone, I need to be able to support the family and can’t do that if my eyes are still like this,” he said.

David Eliya, from Malawi, said he had also been drinking the substance on Saturday. He didn’t feel well on Monday and didn’t know what was wrong. He then heard that two of his drinking pals had been admitted to hospital.

“I then also went to False Bay Hospital where I was admitted, then transferred to Groote Schuur. The doctor told me that I was lucky,” he said.

“I left my friend in Groote Schuur Hospital. His eyes are not working; he can’t see. I am sad because that could have also been me. What would have happened to my partner and my child because they depend on me?” said Eliya.

Police spokesperson Colonel Andrè Traut said the circumstances surrounding the deaths are under investigation after they allegedly consumed homemade beer in Masiphumelele.

“Death inquest case dockets have been registered and the exact cause of their death is yet to be determined,” said Traut.