131 households in Jaagvlakte find themselves without water 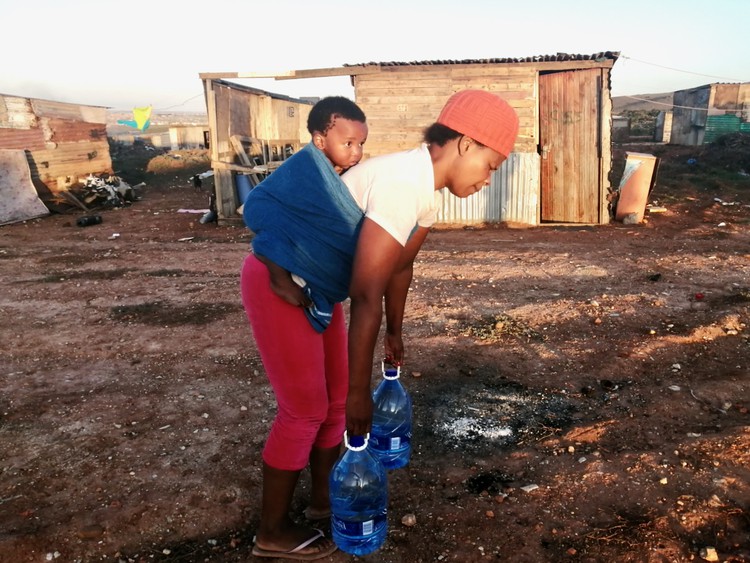 Bolekwa Nongoloza fetches water for herself and her four children from a tap five kilometres away. Photo: Mkhuseli Sizani

Families relocated to “serviced” sites in Jaagvlakte, Port Elizabeth, say they now find themselves worse off because they have no water.

After violent protests demanding relocation, 117 households from Vastrap and 14 from Qunu informal settlement were moved to Jaagvlakte between 27 February and 2 March.

Hundreds more were to follow, but the relocation ground to a halt when the Qunu and Vastrap groups and a backyarder group came into dispute over how the sites should be distributed among them. Residents of Vastrap, the backyarders and the local community policing forum blame Mayco Member for Human Settlements Andile Mfunda for setting the communities against each other. Mfunda denies this.

With the relocation halted, the 131 families in Jaagvlakte find themselves worse off. They had standpipes at their former settlement. Now they have to walk about five kilometres to use a tap in Qunu.

Community leader Daniel Makeleni said, “”Three weeks ago we asked our ward councillor [Vukile Dyele (ANC)] to install water taps for the people. He said that the water will only be switched on once everybody has been relocated to the area [Jaagvlakte].”

Bolekwa Nongoloza, a mother of four children aged between one and 16, said, “For three days I have not taken a bath because we have no water here. The last time the municipal truck delivered water for us was on 14 March.”

“I have asthma and we walk a very long distance to get water … I carry two five litre bottles of water with my baby on my back. With my health condition I can’t take more than that. Sometimes I go to the tap twice a day,” she said.

Resident Gavin Hiles said the tap at Qunu was vandalised and has to be opened with pliers. “We live in a desert here,” he said. “We relieve ourselves in the bushes and we don’t wash our hands .. How can we protect ourselves from Coronavirus under these disgusting conditions?”

Ward committee member Octavia Mento said, “Dyele was asked last week by water department officials to submit the required documents in order for the communal water taps to be installed in Jaagvlakte, but he is nowhere to be found.”

Municipal spokesperson Mthubanzi Mniki said, “I will ask the relevant department to send water tankers to the area. We are busy investigating exactly the main cause of people not having the water in serviced sites.”

Ward councillor Vukile Dyele was not available in his office and both his phones were switched off.