Families in path of new road live in limbo

Since 2017, 33 families in Mushongo Ville have been expecting to be relocated 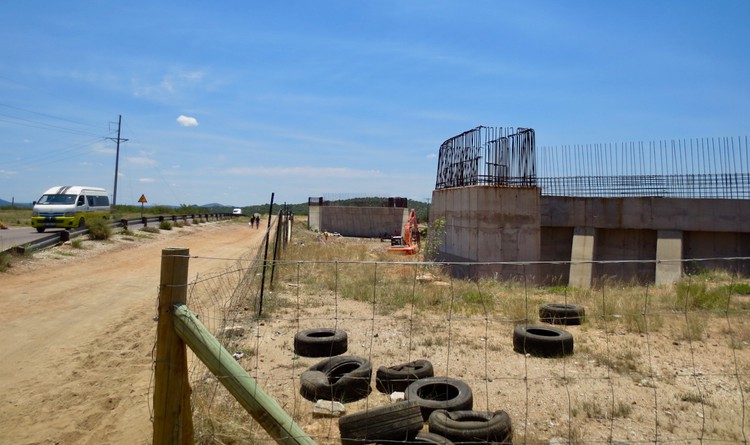 The R541-million Musina N1 ring road was meant to be finished in 2018. It is now set for completion late 2021. Photo: Bernard Chiguvare

About 33 families in Mushongo Ville, Limpopo, are living in limbo. Their houses are in the path of a new road. For years they have been unable to develop their properties, not knowing exactly when they will be relocated for the construction of the road.

GroundUp spoke to a number of residents who said they felt the South African National Road Agency (SANRAL) had kept them in suspense for too long. This is due to extraordinarily long delays in the construction of the R541-million Musina N1 ring road. It was meant to be finished in 2018.

The road is to the western side of Musina, cutting through Mushongo Ville location and back to the N1 (to Beitbridge) at the R572 turn-off. The affected families will be moved to Extension 10 Matswale, about 4km from Mushongo Ville.

Alpheus Mamafa, a community leader, said: “SANRAL should relocate the families soon as they have been waiting a long time. Most of them have transferred learners from a nearby school to the place of relocation. This is an expense for them as they are now paying for transport for the learners.”

The houses for the families’ relocation are nearing completion. But, says Mamafa, “These houses are going to be used for wrong reasons if they are not occupied soon.”

Consultation with the affected families began in 2012. Basil Read was awarded the road contract in 2015. The company was responsible for relocating the families. Construction started in March 2016 and the road was due to be finished in September 2018. SANRAL was to bear the cost of the relocation, scheduled for December 2017. But Basil Read went into business rescue in June 2018.

Another contractor, Raubex, started work on the project in December 2020 and it expects to complete the road by the end of 2021.

Vusi Mona, General Manager Communications at SANRAL, said a new contractor could not be appointed while the business rescue process was underway, hence the long delay.

Mona said that SANRAL has requested a relocation plan from Raubex. As soon as the plan is available the households will be informed.