Families living in classrooms for 18 years to be relocated 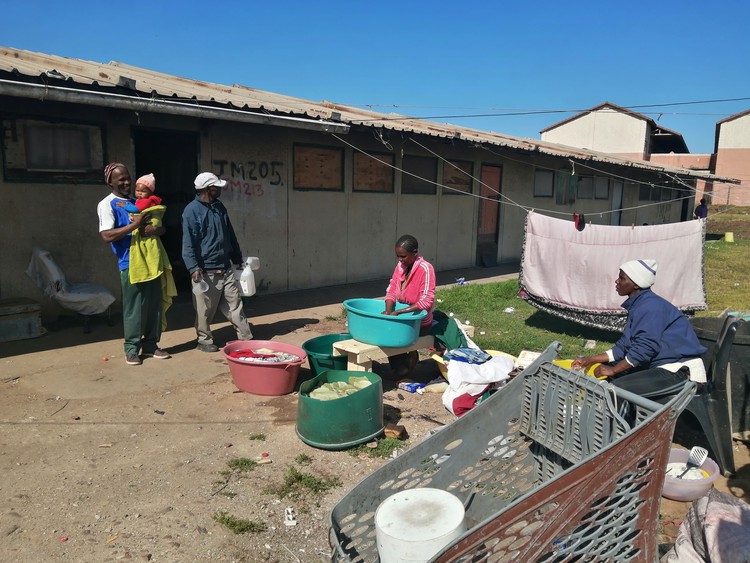 About 27 families who have been living in classes at an abandoned school in New Brighton will soon be relocated to permanent homes. Photo: Mkhuseli Sizani

Some families who have been living in abandoned school buildings in New Brighton will finally be relocated after nearly 18 years.

The families say they had begun to lose hope when their temporary accommodation plan became their permanent home. They were first moved to classrooms at Lwandlekazi High School after their shacks burnt down at Block 40, on 15 December 2001. There are currently about 27 families living at the school.

When GroundUp visited, the smell of faeces and urine was pungent as you enter the school yard which was visibly unkept with thick, tall and wet grass. Everyday, people queue for water at the only working standpipe that is situated behind a row of toilets which residents say are often blocked and smell.

Resident Nombulelo Mtwebana, 34, said: “We arrived here on 15 December 2001 with our mother after our shacks were burnt down at Ezivrandini area in Red Location. The municipal officials asked us to come and stay at this school temporarily while the municipality was busy relocating and building RDPs in the area.”

The first RDP houses were built in 2013 but Mtwebana’s family was not moved there. “Living at the school is dehumanizing,” she said. “We are a family of 14 sharing one classroom. The classroom is divided into four rooms with planks in order to have privacy,” she said.

Nobuntu Sonjani said they were given good news this week that some of them would be relocated to Motherwell and the fire victims would move back to Block 40.

Paul Mbewane, chairperson of the Red Location Development Committee, also confirmed the relocation. He said that three of the six fire victims had agreed to rebuild their shacks at a municipal site where 172 RDP houses are being built. “We have asked Andile Mfunda from Human Settlements to organise temporary structures for them,” he said.

Ward 15 Councillor Celia Mtati has blamed delays in the project to “indecisiveness among the residents”. Residents were given three housing choices which included a single men’s quarters, semi-detached and high rise houses. The residents then chose the high rise homes, she said.

“When the municipality started to build these high rise houses, they changed their minds and asked for normal RDPs. The process was then delayed for more than five years. Also, the Human Settlements ran out of funds to build more houses,” she said. Mtati said the municipality chose not to provide services at the school, fearing that other people would move into the school as well.

Mayoral spokesperson George Geleba said that the ward councillor and the Human Settlements Committee would continue to engage with the residents. “They are in the process of relocating the families to the land,” he said, noting that the “final touches” are to be completed in January.