Pietermaritzburg road has been the scene of many accidents 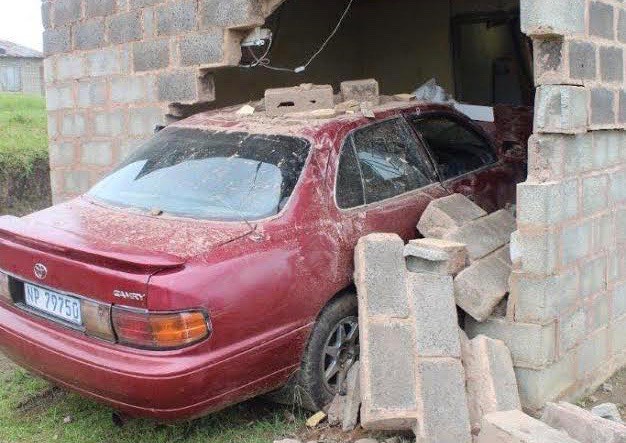 Busisiwe Ngcobo and her two grandchildren had a narrow escape when a car crashed through the wall of their house. Photo: Nompendulo Ngubane

Residents of Azalea Road in Pietermaritzburg want guard rails and speed bumps after a car crashed into a house earlier this month leaving three people injured.

Msunduzi Municipality spokesperson Thobeka Mafumbatha told GroundUp that a plan to put in guard rails is in the pipeline.

The car crashed into the Ngcobo homestead on 10 February, injuring Busisiwe Ngcobo and her two grandchildren, Sthabiso and Mthobisi. The driver of the car ran away and he has not been located.

According to the family and other residents, this was at least the fourth accident since 2016.

“I’m still scared, especially when I hear the sound of a car at night,” said Ngcobo.

Her two-roomed house and other houses are on the bend of a small road in Azalea.

“It was around 3am when the car crashed inside our home. I was sleeping with my grandchildren. The car hit the wall and got into the room we were sleeping in. Mthobisi was badly hurt. He was covered by the bricks of the house. They fell on him. Sthabiso was also injured but the three of us are healing. We are taking medication and undergoing check ups at the hospital,” said Ngcobo.

She said residents had previously asked for guard rails. “We have been waiting for years but nothing has been done. The road has a sharp curve which is dangerous when a driver is speeding.”

Ward councillor Nkosinathi Gambu said the municipality was aware of the risk and “there are plans in place”.

“We are not sure of the timeframe because of the budget,” said Gambu.