“Our municipality does not care about its residents” 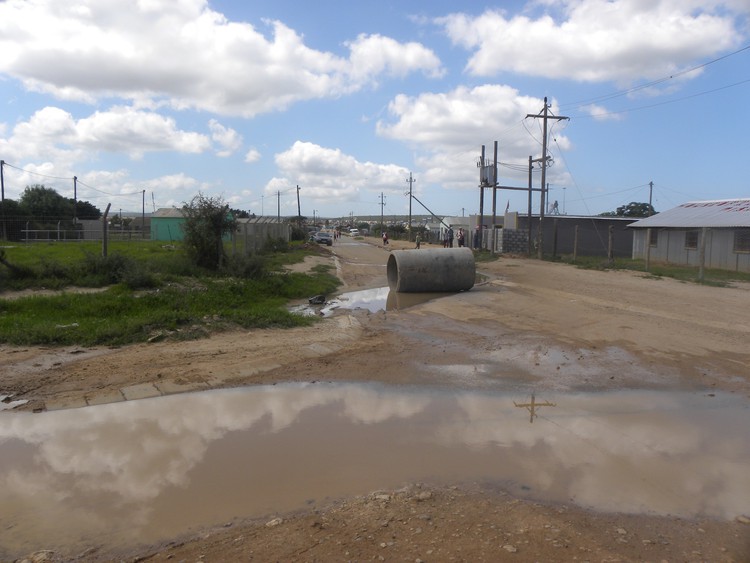 Sewage flows down the street in Addo. Photo: Joseph Chirume

A failing pump in a street in Addo, Eastern Cape, is drenching neighbouring houses with sewage, and residents say the Sundays River Valley Municipality is doing nothing about it.

Residents of five houses in Valentia township say they have to step on bricks and stones to reach their homes. They say their windows and doors are always closed to keep the smell out.

“I have reported the problem three times to the councillor’s offices but they did nothing. I was told that the problem comes from the local sewerage plant that is across this street. Its pipes and engine are not functioning properly”, said resident James Lolose.

“We have had this problem before. The municipality knows that their sewerage system has problems but they don’t want to fix it,” said resident James Lolose. A flood of excrement is flowing from a burst sewage pipe close to his house.

Lolose, who lives with his wife and three children, said they have not opened their windows for two weeks.

Their neighbour, Vuyelwa Manunu, said she was tired of reporting the problem to the municipality.

“The truth is that we have been failed by our councillor and the municipality. We are living in a filthy environment. The municipal workers have told us that their system is old and needs to be upgraded.”

The whole yard is a mess and I can not grow vegetables because of the spillage that is everywhere,” said Manunu.

Ntombizodwa Stefans said her children had no playground and ended up playing in the filthy sewage water. “I used to monitor them but there are times when they just escape and play in the sewage water.”

“I reported the spillage two months ago but the problem has not been rectified. Our municipality does not care about its residents.”

Ward councillor Anthony Dancey could not be reached for a comment as his phone was on voice mail.

Sundays River Valley Municipality spokesperson Zusiphe Mtirara said she did not have a comment on the situation.