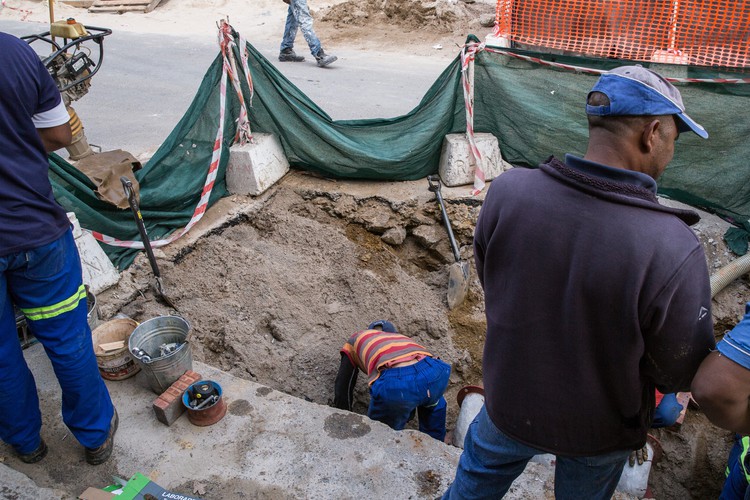 Workers install pipes at a site where human remains were found in Cape Town. Bones of buried people are frequently found in the Green Point/city centre area. Photo: Ashraf Hendricks

Claims that a mass Khoi grave was being excavated brought a Green Point construction project to a halt last Tuesday.

A Facebook post on 27 May claimed that UCT was excavating a mass grave of murdered indigenous people.

The post includes a photograph of archaeologist Gail Euston-Brown at the construction site on Cobern Street.

So Skulls have been found in a Mass Grave in Green Point and since the hostile take over during the landing of settlers, our People was brutally MURDERED for trying to escape…the boards stating these violent barbaric behaviour of settlers can be seen on ur way to Green Point…and Green Point Park is a Heritage Site where our People were buried…in fact if u ever dig deep into this whole of ||Hui !Gaeb, u will find burial sites of our Foreparents…THEY SHOULD LEAVE ALL EVIDENCE…UCT must replace all the Remains they have taken out of the Soil

Euston-Brown works part-time for ACO Associates, which advises companies on compliance with environmental and heritage legislation. ACO Associates used to be affiliated to the university but is no longer. UCT is not involved in the project at all.

In January, when city workers began digging a water pipeline on Cobern Street they found human bones. Heritage Western Cape (HWC) was notified and an order was issued to halt further construction.

The City of Cape Town called in ACO principal investigator and archaeologist Tim Hart and asked him to apply for a permit from HWC to supervise further construction work. After consulting with the District Six Museum, the City’s heritage department, and the South African Heritage Resources Agency, he applied for the permit— which was signed and issued in May.

When the project resumed, one human skeleton and possible parts of another were found, on 24 May. These remains were left untouched because the water pipe’s route would not have disturbed them.

Two additional skeletons were found a few days later and ACO Associates and the City decided that the water pipeline could not be steered around them. Instead the remains were to be excavated and placed in Prestwich Memorial, a few streets south of the construction site.

“There are multiple projects that involved the removal of human bones in that particular area - all of which have gone to Prestwich. So it’s not something that’s out of the ordinary,” Hart told GroundUp. “If anybody wants to put up a structure, lay fibre optic cables, electrical cables, change sewage pipes … one goes through this process of keeping a watch and moving whatever has to be moved and reburying what can be reburied.”

Euston-Brown was monitoring the site last Tuesday when she was approached by three women. She said that they identified themselves only as “Khoikhoi” and told her the project was illegal and must stop. “They started shooting questions at me,” she said. “They got quite aggro.”

The women demanded to see the bodies, claiming that they were their ancestors and could not be dug up, according to Euston-Brown.

“I wasn’t sure how to respond. I was very angry at first,” she said.

Hart, who was not on site, told his colleague to pack her belongings and leave the site. HWC ordered that construction be halted until further notice.

“Everything was misunderstood and out of context. Somebody got excited and said the wrong thing,” Hart added, referring to the Facebook post.

He said the bodies had all been buried “in Christian style, in wooden coffins, so they are certainly colonial period burials”. Further details on who these people were are unknown, as no analysis of the remains had yet been conducted, he said.

HWC did not respond to GroundUp’s request for comment.

Hart said ACO Associates had recently declined a request by HWC to meet with representatives of a First Nation advocacy group. He said that that was not part of their job as contractors.

HWC is apparently meeting an advocacy group about the remains on Wednesday.

Minor corrections were made to this article after publication.