Activists are demanding that government declare a “climate and ecological emergency” 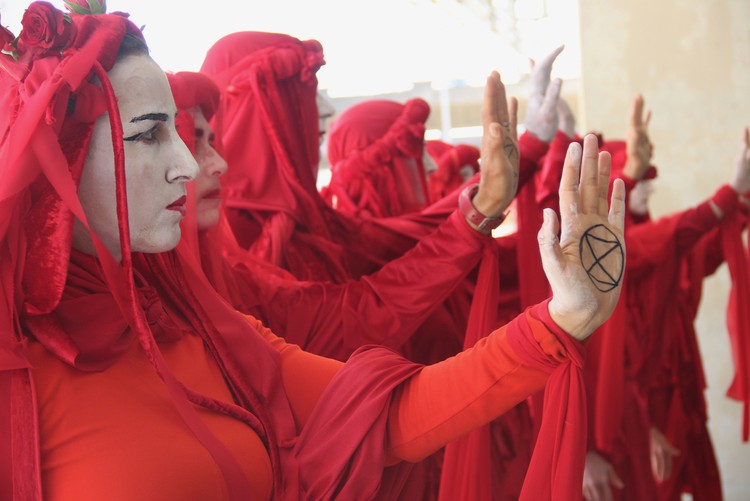 According to one anonymous protestor, the red symbolised the common blood of all humans.

“There are climate criminals making deals behind closed doors that put our futures at risk and we feel that is our duty to rebel for all life on Earth,” said another protester, 21-year-old protestor Shannon Goodman.

In a media statement the group said: “Following the protest on Tuesday 5 November, Extinction Rebellion continues to oppose Africa Oil Week being held at the Cape Town International Convention Centre. This conference brings together international corporations, governments, investors and lobbyists, who – despite the global ecological crisis – continue to value profit over both people and the planet. The delegates who attend this conference are climate criminals”.

“While they make billion-dollar deals, they do not care about global warming caused by their industry, or the floods, droughts, typhoons, pollution, crop failures, refugees and misery that result … These climate criminals are not welcome here!”

The statement said that as Minister of Energy and Mineral Resources Gwede Mantashe and Western Cape Premier Alan Winde had “not adequately responded to the letter of demand we sent earlier this week”.

About a dozen other protestors waved Extinction Rebellion flags across the street from the CTICC. Several cars driving by honked in support.

Extinction Rebellion want government to acknowledge and declare a “climate and ecological emergency, reverse all policies inconsistent with addressing climate change, and work alongside the media to communicate this to their citizens”.

They also demand a legally binding policy to reduce carbon emissions to net zero by 2025, and for the creation of a national Citizen’s Assembly to oversee these changes.

Spokesperson for the premier, Bianca Capazorio, told GroundUp: “The Western Cape is committed to developing an appropriate response to climate change, through both mitigation strategies focusing on reducing carbon emissions, and through building resilience to the impacts of climate change.

“As such, we are already streets ahead of other provinces in terms of our use of alternative energy forms such as solar PV. It is legal in 22 municipalities to connect rooftop solar PV to the electricity grid, with 18 of these 22 already having nationally approved tariffs in place. We continue to push for President Ramaphosa to authorise his minister to allow municipalities to purchase renewable energy from independent power producers.”

“These are complex issues … Globally, hundreds of thousands of people are reliant on the oil and gas industries, either directly or indirectly for their livelihoods. While the green energy sector provides us with opportunities for growth and jobs, we cannot simply abandon projects which rely on fossil fuels without a plan in place to protect those who are currently employed by the sector.”