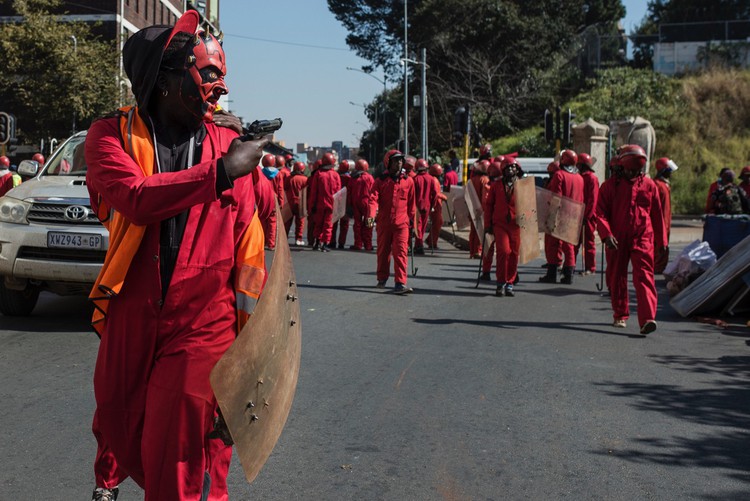 Red Ants carrying out the eviction at the Bekezela informal settlement in Newtown. Photo: Ihsaan Haffejee

Update: Late on Friday, 2 June, the Gauteng High Court set aside Prasa’s Writ of Ejection, suspending the eviction. Justice Carlese ordered that insofar as the eviction had been carried out already, evictees were to be reinstated.

Hundreds of people from the Bekezela informal settlement in Newtown have been forced onto the streets after the Red Ant Security Relocation and Eviction Services (Red Ants) evicted them from their homes.

Residents say shortly after 8am, men carrying out the eviction descended on the informal settlement and began throwing people and their goods onto the street.

By mid-morning, Carr Street was filled with the household belongings of the residents.

Thando Hlatshwayo had just got ready to leave for work when he claims he was beaten and forced off the property without having the time to collect any of his documents or possessions.

“These people did not provide us with any warning. They just come with violence in the morning and chucked us out of our homes,” said Hlatshwayo.

Residents staged a protest. Rubber bullets were fired at them. A man whose car was stoned crashed into another vehicle.

After numerous complaints to the police, members of the Metro police searched the vehicles transporting the Red Ants and found various stolen items hidden in bags under the trucks. The items were confiscated, but no arrests were made.

The City of Johannesburg has gone to court to stop the eviction which was initiated by Prasa.

When GroundUp left the scene, people were still looking for their household items on the street. Many were unsure as to where they will sleep tonight.